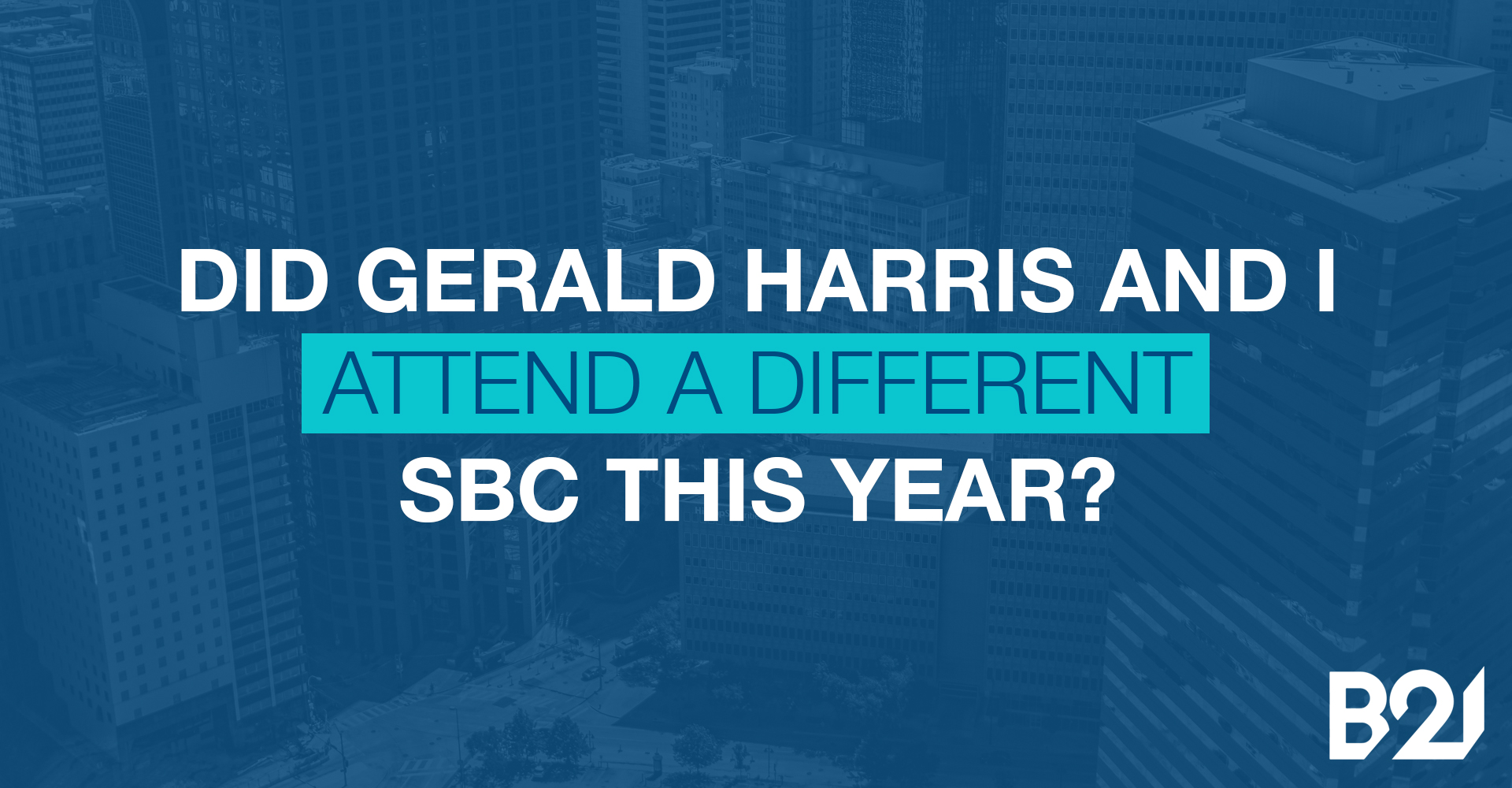 Recently, I was sent Gerald Harris’ article in the Christian Index entitled, “The Southern Baptist Convention is Undergoing a Seismic Shift.” Harris is the Senior Editor of that Georgia Baptist Paper.

After reading the article, I was left with the question, “Did we attend completely different conventions?” Harris laments in the article that Southern Baptists used to be about evangelism and missions, but that we now have new emphases such as social justice, the social gospel, feminism, tolerance, and intolerance.

I found the article troubling for several reasons, but the main concern being that a Senior Editor for one of our Baptist papers, other than highlighting that three motions were presented against Vice President Pence’s address, provided no citations of quotes, motions, resolutions, proclamations from the stage or floor, that give any credence to the claim that the Southern Baptist Convention is shifting on the topics of social justice, the social gospel, feminism, tolerance, and intolerance. He concludes the article by stating, “In the late 1960s W.A. Criswell predicted that Christianity would be virtually extinct by 2000. He believed it would happen because so many preachers had ‘lost the conviction that the Bible is the Word of God.'” So he roots this perceived shift on these topics in a lack of conviction that the Bible is the Word of God. Is Dr. Harris right? Is this a fair representation of this year’s SBC?

It has left me asking at least two questions:

1) Where was inerrancy ever questioned at this year’s convention? Harris states on social justice, “I believe that we should show compassion for all people, but when social justice requires compromise on moral and spiritual issues it is desperately wrong.” However, as noted above, he does not once quote a convention preacher, entity leader, motion, resolution, or statement from the floor that shows how the SBC is embracing social justice while compromising on moral and spiritual issues. Concerning the social gospel, Harris states, “The social gospel embraces ministries that provide help to the needy – clothes closets, food banks, and health-clinics – almost anything that would contribute to the welfare of society. Churches should be engaged in these social ministries, but these ministries should not be the primary objective.” But again he provides no evidence from this year’s SBC that we as a convention are moving away from a biblical view of mercy ministries or that we somehow prize mercy ministry over missions. Even a CNN writer noted of this year’s convention, “For most of their annual meeting this week in Dallas, Southern Baptists have talked about spiritual matters, particularly their keen focus on gaining new converts.”

2) Where at this year’s convention was there a capitulation on feminism or homosexuality? I was most surprised at this assertion. Again, Dr. Harris cites not even one quote to back up his claim. At no point from the stage or floor of the SBC did anyone indicate they believed women should fill the office of pastor or state that homosexuality is no longer a sin.

Do I think from outside the SBC camp there will be pressure to compromise on complementarianism and the historic teaching of the church on homosexuality? Absolutely! Do I think some of that pressure will come from some who would label themselves “evangelicals?” Absolutely! But there has not been one entity leader or prominent pastor in the SBC advocating for women in the pastorate or that homosexuality is no longer a sin.

I certainly think we have to be vigilant on these topics in the future. The culture (and even some who would claim to be in the evangelical camp) believes these views make us bigoted, misogynistic, and intolerant. Thus, we must hold firm to the trustworthy Word as we navigate being Baptists in 21st century America, particularly on these topics. However, I believe to assert that we as a convention have shifted on these things without any evidence is disingenuous. I believe that giving Baptists in the pew who could not attend the annual meeting the impression that there has been a seismic shift on these issues demands evidence or a retraction.

My perception of this year’s convention is much different. I believe we left Dallas as committed to the Great Commission as we always have been as a convention. This convention seemed to declare (in a 70/30 vote) that we wanted to be led by J.D. Greear. Greear is a man whose church loves and preaches the Bible, baptizes hundreds every year, plants churches, sends out missionaries, and who wants us to be unified in those things that are essential. He was supported by SBC leaders like James Merritt, Jack Graham, Bryant Wright, and Ken Whitten. I believe this signals that there are great days ahead when the different generations of SBC’ers can work hand in hand for the propagation of the gospel. In addition, we commissioned 79 Missionary Units to go to the ends of the earth to do evangelism and missions. It is because of these moments and many more from Dallas that I am left wondering, “did Gerald Harris and I attend a different annual meeting?”

*Note: we have reached out directly to Gerald Harris and welcomed him to respond.