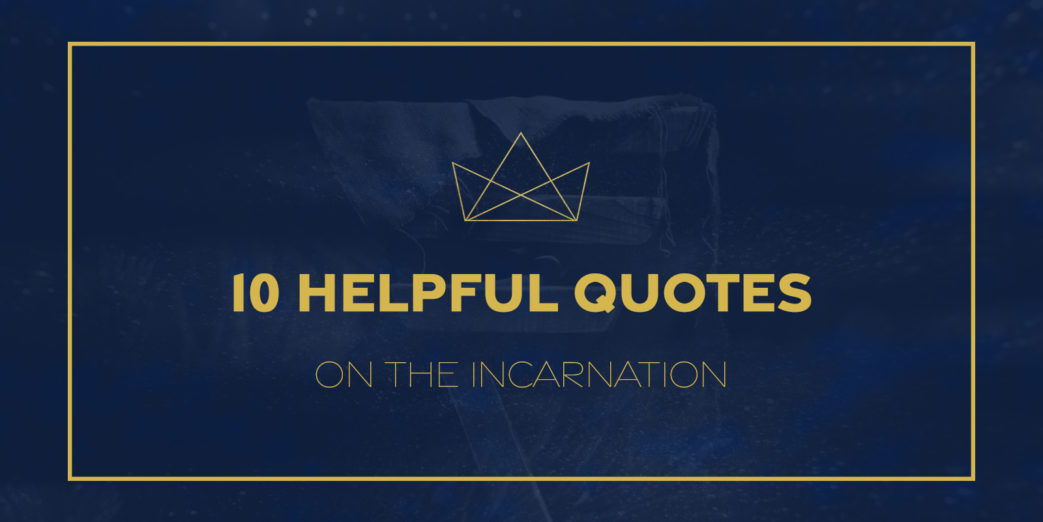 Since therefore the children share in flesh and blood, he himself likewise partook of the same things, that through death he might destroy the one who has the power of death, that is, the devil, and deliver all those who through fear of death were subject to lifelong slavery – Hebrews 2:14

Christ who in eternity rested motherless upon the Father’s bosom and in time rested fatherless upon a woman’s bosom, clasping the Ancient of Days who had become the Infant of Days. What deep descent: from the heights of glory to the depths of shame; from the wonders of Heaven to the wickedness of earth; from exaltation to humiliation; from the throne to the tree; from dignity to debasement; from worship to wrath; from the halls of Heaven to the nails of earth; from the coronation to the curse; from the glory place to the gory place! In Bethlehem, humility and glory in their extremes were joined. Born in a stable! Cradled in a cattle trough! Wrapped in swaddling clothes of poverty! No room for Him who made all rooms! No place for Him who made and knows all places! Oh, deep humiliation of the Creator—born of the creature, woman! But in His descent was the dawn of mercy. Because we cannot ascend to Him, He descends to us. – R.G. Lee

“Yes, in our world too, a stable once had something inside it that was bigger than our whole world.” – Queen Lucy in the Last Battle, Chronicles of Narnia

“Infinite, and an infant. Eternal, and yet born of a woman. Almighty, and yet hanging on a woman’s breast. Supporting a universe, and yet needing to be carried in a mother’s arms. King of angels, and yet the reputed son of Joseph. Heir of all things, and yet the carpenter’s despised son.” – Charles Spurgeon

“Man’s maker was made man that He, Ruler of the stars, might nurse at His mother’s breast; that the Bread might hunger, the Fountain thirst, the Light sleep, the Way be tired on its journey; that Truth might be accused of false witnesses, the Teacher be beaten with whips, the Foundation be suspended on wood; that Strength might grow weak; that the Healer might be wounded; that Life might die.” – Augustine

“He, through whom time was made, was made in time; and He, older by eternity that the world itself, was younger in age than many of His servants in the world; He, who made man, was made man; He was given existence by a mother whom He brought into existence; He was carried in hands which He formed; He nursed at breasts which He filled; He cried like a babe in the manger in speechless infancy — this Word without which human eloquence is speechless!” – Augustine of Hippo

“Christianity is the story of how the rightful King has landed… in disguise… calling us to take part in His great sabotage” – C.S. Lewis

“The plain meaning of these words (John 1:14) is, that our divine Savior really took human nature upon Him, in order to save sinners. He really became a man like ourselves in all things, sin only excepted. Like ourselves, he was born of a woman, though born in a miraculous manner. Like ourselves, he grew from infancy to boyhood, and from boyhood to man’s estate, both in wisdom and in stature (Luke 2:52). Like ourselves he hungered, thirsted, ate, drank, slept, was wearied, felt pain, wept, rejoiced, marveled, and was moved to anger and to compassion. Having become flesh, and taken a body, He prayed, read the Scriptures, suffered being tempted, and submitted His human will to the will of God the Father. And finally, in the same body, He really suffered and shed his blood, really died, was really buried, really rose again and really ascended up into heaven. And yet all this time He was God as well as man!” – J. C. Ryle

“See here [in the Incarnation], as in a glass, the infinite love of God the Father; that when we had lost ourselves by sin, God, in the riches of his grace, sent forth his Son, made of a woman, to redeem us. And behold the infinite love of Christ, in that he was willing thus to condescend to take our flesh. Surely the angels would have disdained to have taken our flesh; it would have been a disparagement to them. What king would be willing to wear sackcloth over his cloth of gold? But Christ did not disdain to take our flesh. Oh the love of Christ! Had not Christ been made flesh, we had been made a curse…” – Thomas Watson

“The Almighty appeared on earth as a helpless human baby, needing to be fed and changed and taught to talk like any other child. The more you think about it, the more staggering it gets. Nothing in fiction is so fantastic as this truth of the Incarnation.” – J.I. Packer