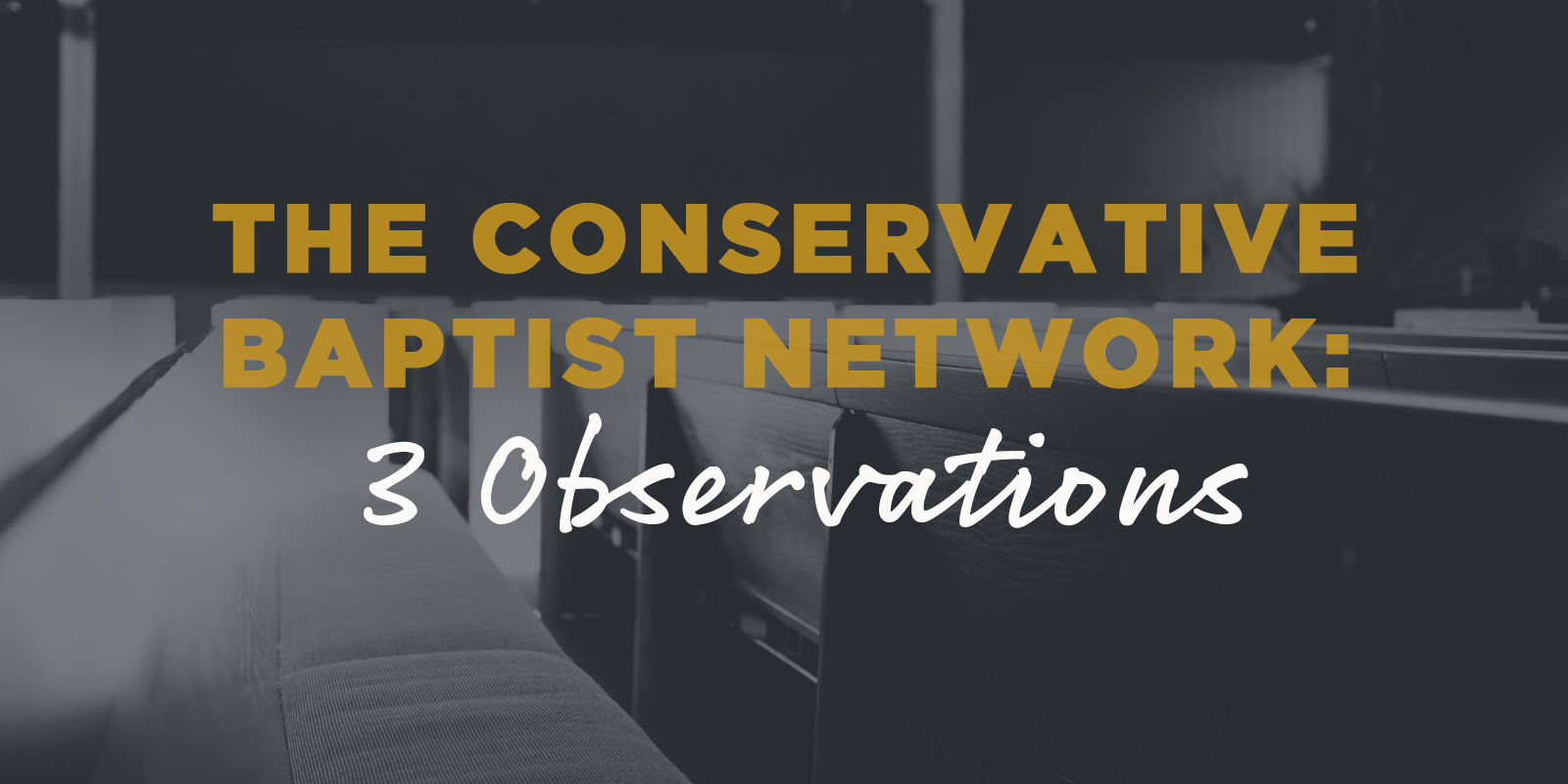 A new network launched this past week called the “Conservative Baptist Network.” Led, it seems, by Pastor Brad Jurkovich, it is described as “a partnership of Southern Baptists where all generations are encouraged, equipped, and empowered to bring positive, biblical solutions that strengthen the SBC in an effort to fulfill the Great Commission and influence culture.”

It’s not clear yet who all is involved, how it will function, or the impact it will have. But enough of the reasoning behind the network’s creation has been clarified for us to offer a few initial observations about it.

It’s great when Baptists “associate” in a way that helps them accomplish the Great Commission more faithfully and effectively. It’s no surprise that in a denomination of 45,000+ churches, some of those churches will connect with each other more naturally than others. We all need to learn from, be encouraged by, and be challenged by others. That typically happens most effectively with like-minded leaders and churches. If that is what this network proves to be about, then they’ll be one of many that have come before them and will come after them. And that’s a good thing.

It’s concerning when Baptists “associate” in a way that denigrates other BF&M2000-affirming Baptists. It’s no surprise that in a denomination as big as ours, there are disagreements. That’s just a part of life between the “already” and “not yet.” As long as we disagree without being disagreeable or unfair, our disagreements have the potential to make our cooperative efforts better. When disagreements are uncharitable, they hurt the advancement of the Kingdom.

That’s why we were so discouraged to see leaders of the CBN describing ministry leaders and professors who affirm the BF&M2000 as liberal, implying that the current 6 seminaries with all of their BF&M2000-affirming presidents and faculties aren’t “conservative”. Hopefully these are early missteps and not the kind of steps that will characterize this network moving forward.

It’s curious when Baptists “associate” in a way that elevates politics above the BF&M2000. When you read the CBN’s website, it’s hard for a BF&M2000-affirming Southern Baptist not to walk away in agreement with the network’s affirmations. But when you hear leaders of the CBN point to a situation with Vice President Mike Pence as a “key moment” in which they knew they needed to create something like the CBN, you have to wonder if political dynamics are being elevated to a position they shouldn’t have in Southern Baptist life. How does the presence of a VP at the SBC meetings have anything to do with the sufficiency of Scripture? It’s not clear. No doubt, there are a wide range of views on how we should engage politically as Christians and as Southern Baptists. Let’s hope that the CBN doesn’t make a particular political approach more important to our cooperation than the BF&M2000.

Southern Baptists are always going to disagree. There are a wide range of opinions among the Baptist21 team. Most of us weren’t fans of Resolution 9. We think we can do a better job engaging politically. But none of these disagreements are significant enough to make us think we’re headed toward liberalism, weaker positions on the Scriptures, or anything like this. By God’s grace, we believe we can move forward with our disagreements, better together for the sake of God’s glory and the good of the nations. Let’s pray that our leaders are helping us walk towards Christlikeness together.