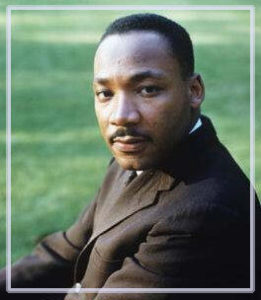 In the month of February it is a common practice to pause and take the measure of historical figures in the struggle for civil rights in America.  Dr. Martin Luther King Jr. is a figure that stands heads and shoulders above those fighting for justice, equality and brotherhood in the mid twentieth century.  At times accusations of infidelity and a failure to uphold academic integrity in his doctoral dissertation have placed an ominous shadow over the legacy of a man who has been an essential part of sculpting the American cultural landscape.  It is not my intention to validate or invalidate the accusations made of Dr. King, but it is to take another look at Dr. King’s Letter from a Birmingham jail and glean from it what we can.

King penned the letter from a Birmingham jail cell in response to an open letter written by eight prominent clergymen in Alabama that called on King to allow the battle for integration to continue in the local and federal courts.  Their warning was one that accused King’s method of civil disobedience of inciting civil disturbances.  In response, King wrote to persuade these men that justice, equality and freedom are not simply causes to be championed, but are at the heart of what it means to be human in light of their Christian faith.

There are numerous aspects of this letter that are worthy of our time and thought, but for the sake of brevity, I will draw upon what King states about his methodology in the fight for civil rights, and his thoughts about the church.

The method King used to contend for change is known as civil disobedience, it can be defined as an active refusal to obey certain laws because of a prevailing inward conviction.  The intended result of civil disobedience was not to cause an adverse reaction from the powers that be, but to initiate negotiation.  As King states, “Nonviolent direct action seeks to create a crisis and establish such creative tension that a community that has constantly refused to negotiate is forced to confront [an] issue.”

King’s strategic and purposeful design was greatly needed in an era of heightened violence, emotion, and passion.  It was never King’s intention to move irresponsibly into direct action, but to reason through four analytic steps before beginning a campaign.  The steps are as follows: (1) Collection of facts to determine whether injustices are alive, (2) negotiation, (3) self-purification, and lastly (4) direct action.

As a result of his keen understanding of the time in which he lived, knowing that some were looking for a “green light” to destructively rebel against authority, King did not leave the application of civil disobedience up for interpretation.  It is made clear that when disobedience is executed, those who take part in a demonstration will willingly endure the consequences which their actions require according to the law of the land.  King also notes that there is never a permissible instance when immoral means justify moral ends.

In defense of civil disobedience, King gives several precedents for his action.  The Old Testament story of the Hebrew boys, Shadrach, Meshach and Abednego are included as a model of peacefully reaping the consequences of an illegal action.  King also notes the willingness of early Christians to hold to their biblical convictions in the face of the excruciating pain of the chopping blocks in Rome.  Lastly, the reader is called to examine the positive affects of a healthy extremism in the lives of Jesus Christ, the Apostle Paul, John Bunyan, Abraham Lincoln, and Thomas Jefferson.

We have already discussed the method of civil disobedience, the diagnostics of a situation that calls for disobedience, and the parameters set around such action.  The missing link is the organization that is responsible for organizing the masses and championing the cause of brotherhood, justice, and freedom.  In a “Letter from a Birmingham Jail,” it is made painfully obvious that King’s hope is in the church. This can be seen in his intense praise and disappointment for the churches in the South.

King expresses his gratitude to the “noble [white] souls,” who contend for justice and have “carved a tunnel of hope through the dark mountain of disappointment.”  To those who have been to jail, walked the highways, lost the support of their fellow ministers, and left the security of their congregations, King extends his thanks and receives their encouragement.

On the other hand, King expresses his dissatisfaction with the actions of some white churches and their leadership, who are seemingly more committed to their comfort than their conviction.  These words of displeasure do not come from a man who has no hope in the church, but from a man who clings to the church of Jesus Christ as his hope.  I will allow King to speak for himself, “I have been disappointed with the church, and I do not say that as one of the negative critics who can always find something wrong with the church. I say it as a minister of the gospel, who loves the church; who was nurtured in its bosom; who has been sustained by its spiritual blessings, and who will remain true to it as long as the cord of life shall lengthen.”  These are not the words of a man who is blaming the church for the injustices of the South, but from a man who desires her to act as she ought, being the very hands and feet of Christ.

I have already praised Dr. King for his method of Civil Disobedience, and shed some light on why I thought it was very timely and well executed.  If we take a step back and truly evaluate the fact that King had a number of options when it came time to act it will give us some insight on applying a method or an initiative in our own sphere of influence.

There are so many questions that arise when it comes to evaluating King’s actions. One may ask, “Is King a pacifist? Should one always act in non-violence?” or “Is breaking state and federal law ever in order to make a statement?”  There were a number of other men and women who were active in the charge for equality, why did King’s Civil Disobedience save the day? Why didn’t the Black Nationalism and Afro unity movement of Malcolm X generate similar results in the larger culture?   Why did the theological liberation of James Cone not resonate with both blacks and whites?  Is there a reason why the political actions of Stokley Carmichael’s Black Panthers did not sway the hearts and minds of the masses?  Why did W.E.B. Dubois insistence on demanding equal rights now not revolutionize American culture, and why did the gradualist policy of Booker T. Washington clash with others who where fighting for equal rights?  I list each of these, not to drop names, but to show that each of these methodologies (in my estimation) failed to some to extent to take into account the unquantifiable variables which King masterfully accommodated.

King understood those who were for him, against him, and those who were indifferent to his cause to the extent that he could anticipate the potential reactions of each camp and plan accordingly.  An important variable to grasp is the uncertainty of leading people who are emotionally charged and capable of taking a methodology to an unhealthy extreme, as well as contending against another group of people who were also emotionally charged and could be easily provoked to extreme action as well.  Do I believe that King was a pacifist, or believe that he would say that the law should always be broken in order to make a statement?  I would have to say no, but I do believe that for this era understanding the facts and more importantly, understanding the variable of leading people who may take your initiatives to an unintended conclusion is vitally important.  It is my contention that grappling with the facts, as well as the unknown of leading autonomous humans and anticipating every possible outcome is extremely important.

King built safeguards in his methodology to eliminate the chance of extremist behaviors being understood as acting in accordance with his tactics (because King did not allow for violence at any time, violent acts that were committed would be difficult for King’s opposition to attribute it to his methodology).  This forethought set King apart from other leaders and is a worthy principle for any leader to incorporate.  The measure of a good leader is not getting those who are already with you to follow your leadership, but being a statesman to those who oppose you.

Above I used the term “moderate,” I did not use it in the popular political sense, but with the lexical meaning of being in the middle or avoiding extremes.  King mentions that he is ‘gravely disappointed with what he calls the ‘white moderate.’  These citizens are the greatest stumbling block in the quest for equality because they are more devoted to ‘order’ than to justice, who prefer a negative peace with is the absence of tension to the positive peace with the presence of justice.  They say, “I agree with you in the goal you seek, but I can’t agree with your methods of direct action.”  King eloquently characterizes a group of people whose shallow acceptance (resulting in no action) is more bewildering than outright rejection.

In the ministry or business of every leader there will be a large middle ground between those who are onboard and indicate it with their actions, and those who are vehemently against change.  Though King’s methodology helped him in this arena, he gave no remedy to leading this group whose apathetic attitude bogged down the tide of change.  The take away here is to be aware of this group, learn to speak “their language,” and not growing weary in doing good.

Scripture provides an example of Nathan confronting David’s sinful inconsistency with a parable.  In a contemporary context a historical account, or a loving satire could also be used to stir the thoughts of the moderate to action as well.  To escape the realm of justice and enter into the current discussion in the Southern Baptist Convention, this observation could be applicable today with reference to the Great Commission Resurgence.  There are those who are indifferent, and those who think that it is important, but not enough to move into action.

At the foundation of what King desires if for Christians to live with a worldview that allows Scripture to refine every aspect of their lives. For the believer, there is a tendency to reduce the Gospel to being only that which saves us.  It is an ongoing quest for every Christian to allow the Gospel to be more than a gateway into God’s grace, but a pool that the Christian jumps into and allows the Gospel to touch every part of our lives.  A renewed understanding of the Gospel will allow the believer to live a life of biblical consistency, viewing everything from issues of justice, to child rearing, and culture through a Gospel filter.

As my attempt at brevity fades away by each stroke of the key, I will conclude by underscoring King’s commitment to biblical principles as it is evidenced in the ethics of his methodology, his respect for authority, and the use of biblical precedents to encourage action.  We can all learn from the wisdom, candor, and boldness of Dr. Martin Luther King Jr. as he lead a nation to think differently in a time of great turmoil and discrimination.  May the Church continue to vie for justice wherever the belittling of God’s image destroys the dignity of humanity.