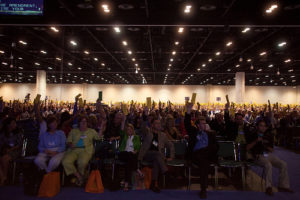 The level of excitement amongst Southern Baptists leading up to the 2010 SBC in Orlando was, to say the least, unusually high. With the Orlando convention in our past, we thought we’d offer a few thoughts about the things that greatly encouraged us (in no particular order).

1. The Passing of GCRTF Recommendations – Over a year and four months ago, Dr. Danny Akin preached a sermon on the “Axioms of a Great Commission Resurgence.” Since this sermon was delivered, there has been much said, prayed, written, and researched about. Although there was some disagreement, Southern Baptists overwhelmingly voted in favor of the GCRTF recommendations. The approval of these recommendations is not the last step. It is a very critical first step though.

2. Election of Bryant Wright as the President of the SBC – There were four presidential candidates that Southern Baptists had to choose from. All four were godly men with great ministry experience. Two of the candidates were for the GCRTF recommendations and two were not (although they were for the Great Commission, of course). On the second ballot, Southern Baptists elected Bryant Wright to be the President of the SBC. We are very encouraged to have a president who is fiercely committed to the Great Commission.

4. Pastor’s Conference – The pastors that make up the over 44,000 churches of the SBC have very different tastes when it comes to “good preaching.” Thus, it is impossible to satisfy everyone. Yet, by our estimation, Pastor Kevin Ezell, the president of this years Pastor’s Conference, did an excellent job. Placing a number of “new faces” on the preaching schedule, provided the diversity necessary to excite a wide range of Southern Baptists. We are grateful for the leadership that Pastor Ezell provided for the pastors of the SBC.

5. Meal with Dr. Rainer, Dr. Waggoner, and Dr. Moore – While there are some who whine about the lack of connection between older and younger pastors, many Southern Baptists are doing something about it. Dr. Thom Rainer and Dr. Brad Waggoner spent a good bit of time with about 12 young SBC leaders over a meal talking about the SBC, church issues, the gospel, and football. It was a great time of fellowship and conversation for the advancement of the kingdom. Also, a similar gathering was held on Sunday night with Dr. Russell Moore. These types of get-togethers are a great sign of health.

6. The Way Southern Baptists Disagreed – Southern Baptists are passionate people. They believe in the gospel and its advancement with great conviction. Yet, Southern Baptists have not always discussed the manner in which the gospel should be advanced with humility and grace. And this is no small thing. Yet, we believe that the disagreements that took place on the floor by opposing sides of the GCR were honoring to Christ. We believe that this is one of the greatest things that happened at the SBC this year and we hope it is a sign of things to come.

9. 9 Marks at 9 – 9 Marks ministries, like last year, provided an interesting and provocative discussion on two nights of the SBC. Attendees received a number of free books and refreshments each night. This is the second year that 9 Marks has had these late night sessions. Both years, these 9 Marks events have offered something unique and helpful to the many young Southern Baptists in attendance.