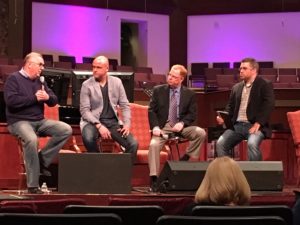 The panel addressed “The Future of Florida Baptists,” and featured prominent, well-respected leaders within the state convention. Newly elected Executive Director-Treasurer Dr. Tommy Green anchored the panel alongside Dr. Jimmy Scroggins, Senior Pastor of Family Church in West Palm Beach, FL, and Dr. Ted Traylor, Senior Pastor of Olive Baptist Church in Pensacola, FL. The panel, moderated by B21 member Dean Inserra, Senior Pastor of City Church in Tallahassee, FL, addressed hot-button issues emerging within Florida’s state convention, most notably the proposed shift to give at least 50% of Cooperative Program money to the Southern Baptist Convention. Dr. Green emphasized the importance of this allocation, urging Florida Baptists to increase in unity within the SBC and set a precedent of engagement in national and global missions. By directing more CP money outside of Florida, members of the convention will better partner with church planting and missionary efforts happening around the world through NAMB and the IMB, in turn lessening the burden on these large entities to tap into financial reserves in order to maintain their efforts.

Those in attendance at the B21 panel were given a first look into Dr. Green’s fresh vision for the FBC, which culminated in a unanimous vote during the convention to adopt a 51% out, 49% in state budget. Pastors Traylor and Scroggins addressed the call to unity in the FBC between an older generation and an emerging next generation of Southern Baptist leadership. Dr. Traylor called for a commitment to work together to achieve the 2015 Convention theme of “Moving Forward,” refusing to allow second and third tier issues of church leadership to create divisions and unrealistic litmus tests between the two generations. Panel attendance seemed to accept this challenge, with audible agreement from the audience to put aside divisiveness for effective partnership in the gospel. Attendance at the B21 panel itself reflected the changing SBC landscape, as seen by a diverse audience of varying ethnicities and ages. Those in attendance were engaged in the panel conversation, many staying long after the formal program ended to exchange ideas and expressions of gratitude for the dynamic leadership of the panelists.

Throughout the event it was clear that Florida Baptists are invested in the direction of their convention and want to see the FBC play a strong role in the exciting developments taking place in the national convention. We pray that, even if in a small way, the B21 panel will help pave the way for a sharper, more focused convention, as well as foster a greater sense of community and investment from Baptist leaders. We hope that there will be more events at our states’ annual meetings to engage leaders and discuss these important issues. We all need to work together to educate and create buy-in for a rising generation, while equipping an experienced generation of Baptists to serve and lead in a changing cultural landscape. As we do so the SBC will continue to grow as a powerful network of unified brothers and sisters, leading with wisdom and striving to bring the gospel to the ever-changing world.

-Ashlyn Portero serves at the Executive Director at City Church in Tallahassee, FL.