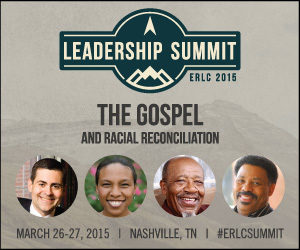 B21 is very excited about the ERLC’s upcoming Leadership Summit on “The Gospel and Racial Reconciliation.” This summit will not only include the leading voices on the issue, but will also be an invaluable resource for your life and ministry. We cannot stress what a timely and beneficial summit this will be!

As a foretaste of the event, enjoy both the promo video and following blog post by the ERLC’s President, Dr. Russell Moore:

Racial Justice and The Gospel

On this, the 50th anniversary of the Civil Rights Act, I am reminded of one of my favorite pictures, which sits on a shelf in my office. It’s a photograph of a line of civil rights workers—in the heat of the Jim Crow era. They’re standing shoulder-to-shoulder, each of them bearing a sign. The sign reads, simply: “I Am a Man.”

I love that picture because it sums up precisely the issue at that time, and at every time. The struggle for civil rights for African-Americans in this country wasn’t simply a “political” question. It wasn’t merely the question of, as Martin Luther King Jr. put it from before the Lincoln Memorial, the unfulfilled promises of the Declaration of Independence and the U.S. Constitution (although it was nothing less than that). At its root, Jim Crow (and the spirit of Jim Crow, still alive and sinister) is about theology. It’s about the question of the “Godness” of God and the humanness of humanity.

White supremacy was, like all iniquity from the Garden insurrection on, cruelly cunning. Those with power were able to keep certain questions from being asked by keeping poor and working-class white people sure that they were superior to someone: to the descendants of the slaves around them. The idea of the special dignity of the white “race” gave something of a feeling of aristocracy to those who were otherwise far from privilege, while fueling the fallen human passions of wrath, jealousy, and pride.

In so doing, Jim Crow repeated the old strategies of the reptilian powers of the air: to convince human beings simultaneously and paradoxically that they are gods and animals. In the Garden, after all, the snake approached God’s image-bearer, directing her as though he had dominion over her (when it was, in fact, the other way around). He treated her as an animal, and she didn’t even see it. At the same time, the old dragon appealed to her to transcend the limits of her dignity. If she would reach for the forbidden, she would be “like God, knowing good and evil.” He suggested that she was more than a human; she was a goddess.

The words affirmed the thing that frightened the racist establishment more than anything. Those behind the signs were indeed persons. They bore a dignity that could not be extinguished by custom or legislation. I am a man.

The words also implied a fiery rebuke. The white supremacists believed they could deny human dignity to those they deemed lesser. They had no right to do so. They believed themselves to be gods and not creatures, able to decree whatever they willed with no thought to natural rights, or to nature’s God. The signs pointed out that those who made unjust laws, and who unleashed the water-hoses and pit-bull dogs, were only human, and, as such, would face judgment.

The civil rights movement succeeded not simply because the arc of history bends toward justice but because, embedded in our common humanity, we know that Someone is bending it toward a Judgment Seat.

“I Am a Man,” the sign said, with all the dignity that truth carries with it. And, the sign implied, “You Are Just a Man.” If that’s so, then, as Odetta would sing, “God’s Gonna Cut You Down.” The truth there is deeper than the struggles of the last couple of centuries. It gets to the root problem of fallen human existence, and it’s the reason white supremacy was of the spirit of Antichrist.

Behind the horror of Jim Crow is the horror of satanized humanity, always kicking against its own creatureliness, always challenging the right of God to be God. However often this spirit emerges, with all its pride and brutality, the Word of God still stands: “You are but a man, and no god” (Ezek. 28:2).

A version of this article originally ran on January 17, 2011.