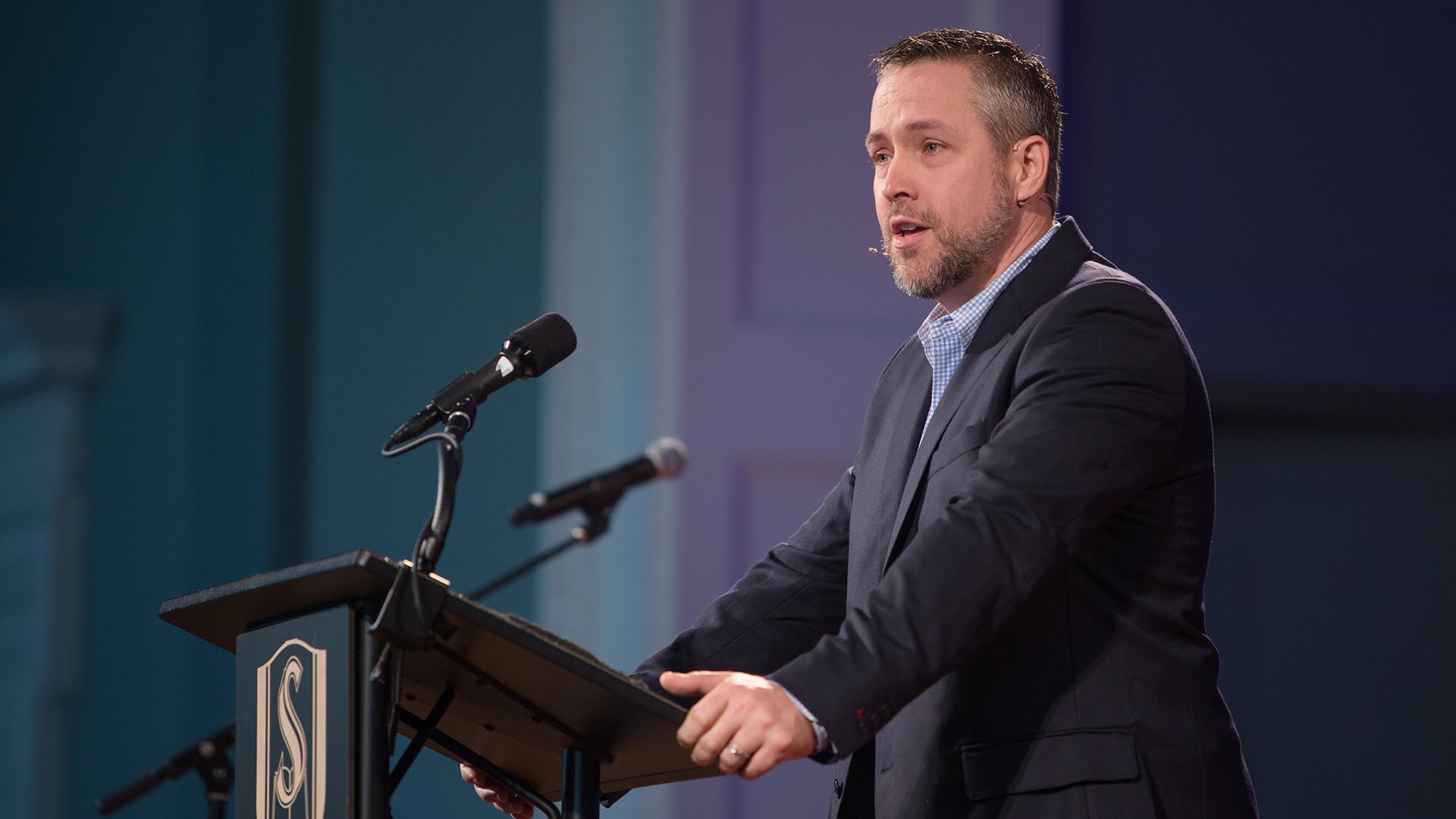 Recently, we asked Dr. J. D. Greear to comment on pastoral ministry, baptist life, and the future of the Southern Baptist Convention under his leadership.

What do you love most about pastoring?

I know it sounds cliche, but I genuinely love seeing people’s lives transformed through the gospel. I love getting letters like I did the other day from a young woman who described herself as “formerly an atheist feminist” but “found God” at The Summit Church. I love seeing those far from God brought near, and I love seeing leaders raised up and sent out. The thrill of standing up weekly and preaching the Word of God never gets old. Never. And getting to see leaders of equal or greater capacity raised up alongside of me—honestly, is there any better job on the planet?

Why are you allowing yourself to be nominated, and what would you hope to accomplish as president of the SBC?

I have six core passions for the SBC:

Keep the gospel above all.

The basis of our unity in the SBC is the gospel. As a Convention, we should be neither defined nor characterized by a certain church style, method of ministry, political affiliation, or cultural and racial distinctive. We are a gospel people; the gospel is, as Paul said, “of first importance” (1 Corinthians 15:3). We must avoid the temptation to let smaller doctrinal issues or any personal preferences replace the centrality of the gospel as our unifying standard.

Keep the pressure on in intentional, personal, evangelism.

An old pastor of mine used to point out that the first thing to get cold on your body is your feet. The same is true in the Christian life. If we’re going to move the evangelism needle in our churches, we’ve got to be modeling what we’re preaching.

Can you imagine what it would look like if every Southern Baptist church committed to help in the planting or revitalizing of one church in the next two years?

Mobilize our college students for mission.

At the Summit, we often tell our graduating students, “You have to get a job somewhere; why not get one in a place where you can a part of a strategic work of God?” They have responded by going by the hundreds. I think we can see the same thing happen in thousands more churches in our Convention.

Engage the next generation in cooperative mission.

Southern Baptists continue to produce more church planters, more missionaries, and more seminary graduates than any other group in America, and we need to do everything we can to get the next generation engaged in cooperative mission.

What are the biggest threats facing the SBC, both within and without?

I believe God is trying to get our attention.

Our doctrine and mission are solid, but we need a new culture and a new posture in the SBC. We need, in humility and repentance before God, to commit (or re-commit) ourselves:

What are your hopes for the entities that are looking for new presidents (IMB and EC)?

For the Executive Committee role, I am hoping to see someone with the respect of the former generation but a vision for the next one. Institutions have served, and continue to serve, the Great Commission well. But the needs of the Great Commission must always come before the needs of institutions. Determining what that means in certain situations can certainly be tricky, but to prioritize the needs of institutions above the mission is idolatry and will surely be cursed by God.

For the IMB position, that person needs to continue the missiological and theological direction that the IMB has been moving for the last few years. Missionaries worry that a new leader will want to change too many things too quickly, so I pray the new leader takes his time and preserves all of the good that is happening organizationally. And the IMB president must also be someone who supports our missionaries by connecting with traditional Baptist churches, doing what he can to get every church involved and sending.

If you could change one thing at the annual meeting, what would it be and why?

I’d see if it’s possible to get Nicolas Cage to come. I’m not sure if he’s a Baptist. Or a Christian. Honestly, when I watch some of his movies, I’m not sure he’s a human being. But I’ve always wanted to meet him, and I always go to the annual meetings … so it seems like a natural fit.

Seriously, the one thing I’d love to see change about the annual meetings is to get more of our younger generation there and engaged. The tide has shifted recently, and many younger Baptists are stepping up to get involved. I only want to see that increase. I think we should also ask questions about whether our current schedule of meeting, way of voting, and structure of presentation are the most efficient way to accomplish what we need to. There is value in continuity and change is hard, but we should be willing to at least ask the questions.

Is the BFM 2000 a sufficient doctrinal statement for Southern Baptist cooperation, or do other things need to be added?

Though it is not inspired by God, the BFM 2000 is, in my view, an adequate, if not ideal, doctrinal statement. It is narrow enough to keep unity and broad enough to allow for variance on non-essentials. It is a wonderful guide and rallying point for our Convention.

What were your thoughts on the Great Commission Resurgence (GCR) and how do you think the GCR is going across the convention?

It is encouraging that states are responding with changes, asking even harder questions than before about how to get their money to the field. The GCR changed the narrative in many ways, asking, “Are we doing everything necessary to fulfill the Great Commission?” The more our churches, entities, and leaders are asking that question, the more we’ll see the needle more in a helpful direction.

The GCR, however, hasn’t magically solved our missional sluggishness. Our missionary force is smaller now than it has been in years, and while we are planting more churches, we are baptizing fewer people. We need to recover the emphasis that launched our Convention, and promote the idea that churches’ sending capacity matters more than their seating capacity. Every church in our Convention, whether it has 20 people or 20,000, bears a responsibility to advance the Great Commission.

One of the easiest ways we can get people more engaged is to increase CP involvement. I see this happening in three ways.  First, call for churches to give more to the CP. (Obvious, but bears repeating.)  Second, celebrate state conventions getting money to the field. (Southern Baptists have many desires in their giving, but I believe this is dearest to their hearts.)  Third, encourage all forms of Great Commission giving. We do not, of course, want to foster a societal approach, but we need to allow churches freedom in engaging.

On the whole, I am thankful for Johnny Hunt and Ronnie Floyd’s leadership in the GCR, and I continue to be honored that they asked me to be a part of this during 2009-2010.

How will you try to encourage and incorporate young Southern Baptist pastors into the work of the convention?

Institutions need movements (for vitality), but movements also need institutions (for staying power). Sometimes institutions need to be discarded, but in many cases (such as ours) it would be foolish and shortsighted just to walk away. The institutions of the SBC have led us to be the greatest missionary mobilizing force in the world, and I don’t think God is done with them quite yet.

The more we engage within these institutions, the more we will be able to affect change. Decisions are made by those who choose to show up, and in our context, the way to “show up” is to get knee-deep in the life of the SBC institutions. Show up, stick it out, and get involved.

How can your experience serving with the IMB overseas help you as president?

You can’t help but look at the sending institutions and support structures differently from that side of the pond. It made me incredibly grateful for the way God has set up our Convention and the power it wields for support and mobilization. After God called me to pastor here in the United States, I knew that part of my calling would be to get involved in the sending structure. God first called me into ministry by calling me to the mission field, and he never released that call. The way I am fulfilling my call to the field is as a pastor who sends. As William Carey famously said, if some will volunteer to dangle from the end of the rope in foreign lands, others of us have to commit to holding the rope.

Being there also instilled in me that the reason we do all that we do is to seek and save the lost. I can’t talk about things like the CP and Lottie Moon offerings and SEND conferences without thinking of the faces of my Southeast Asian friends whose eternal souls are in the balance. We need God to bless us, and cause his face to shine upon us, not just for our sake but theirs, that his way may be known in all the earth and his salvation among all nations.