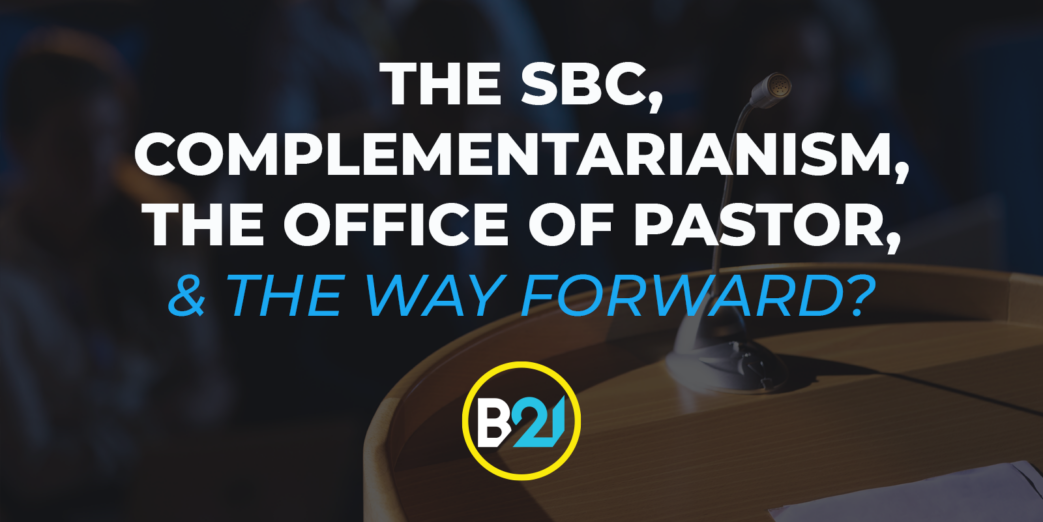 February 10, 2021, I posted a twitter thread about “pastors/complementarianism” due to the amount of conversation I was observing on Social Media (SM) around the topic. This thread preceded both SBC 2021, SBC 2022, and the whole dust up with Rick Warren including the revelation that he was ordaining women as “pastors” but not “elders.” Almost two years later, there still seem to be questions around this issue.

Some might pushback and argue that we are not really as unsettled on the complementarian question as the Rick Warren controversy would suggest. I am assured by some that there are fewer women in the SBC holding the title of “pastor” than even a decade ago. Although I have no concrete verification, where I minister, I find that observation to be true. However, given Warren’s influence, his reception at the SBC, his successors at Saddleback church, continued SM fighting, and the culture’s persistence against gender distinctions and complementarianism of any kind, there do seem to be questions of clarity and future cooperation pertaining to this issue. I see a two-fold challenge: Clarity on complementarianism and biblical polity. The issue is not just with a lack of clarity on complementarianism, but also with our ecclesiology and our understanding of the office of pastor itself.

The SBC’s complementarian problem: The slide on SM has been perceptible. In 2020 on SM, even in our own circles, it appeared as though complementarianism was starting to mean that the office of Pastor/Elder is for men only, but women can occasionally “preach” in the Sunday service of the gathered church. Fast forward to 2021: Rick Warren argued for pastor as a “gift” that women can possess rather than just an office to hold. For some, complementarianism began to mean that women can preach and even be called “Pastor,” but they cannot be called an “Elder or Overseer (Bishop).” I believe the vast majority of the SBC would disagree with this conclusion. However, you can see how among some, even in the SBC, the term “complementarianism” began to erode distinctions (and thus complements) among the genders. For instance, someone like Warren is arguing that while only men can hold the office of elder, women can be called “pastors” and even perform the functions of the office of elder, but they just cannot hold the title.

The SBC’s polity problem: Both on SM and in some SBC blogs, we seem also to lack agreement and even understanding on the office of Pastor/Elder/Overseer. So, alongside a possible complementarian problem we also have a potential polity problem, particularly with understanding plurality of elder leadership taught in the scriptures.

I am hopeful that those assuring me the issues are not as big as SM might suggest are right, and they may well be so. I also hope what I perceive to be a lack of understanding of plurality is overstated. However, it never hurts to review and restate who we have been, who we are, and who we desire to be. Now before I jump into these considerations, I will reiterate something I wrote in that initial thread. I am thankful for any charitable conversation and pushback around an open Bible on this topic. I know good brothers and sisters, godlier and smarter than I am, that think differently on these topics. It is my desire to contribute my thoughts in a spirit of humility. I also hope my views honor the plain reading of the text that reflects a sound hermeneutic, consistent with what we have said in past Baptist confessions.

An Argument for Clear Complementarianism and Plural Overseer Polity

It seems there are three ways before us as far as cooperation and as these questions/issues are concerned. It really comes down to the question: At what level do we want to be confessional?

Option 1: Confessional at the local church level – This would mean to be in friendly cooperation with the SBC or your state convention, every local church must affirm the BFM2000 (even if you currently affirm New Hampshire or Second London). While this would certainly bring more clarity, this would be a departure from how we have historically viewed and used our BFMs. Interestingly, even in the wake of the adoption of the new BFM in 2000, there was not a push to remove churches that cooperated with the SBC that had women as pastors, even Senior Pastor.

Option 2: Confessional at the cooperation level – This would mean that any cooperation among churches, at both the national and state level, is governed by the BFM. Practically, this would mean we will not send any missionaries through the IMB, plant any churches through NAMB, appoint any Seminary Professors in our six Seminaries, hire any employees in our entities, or appoint any Trustees who do not affirm the BFM2000. This option would be more consistent with how the BFM2000 has been used over the past couple of decades. However, I believe this is where some of the confusion came in last summer in Anaheim. The onus of the debate should not have been put on the BFM’s meaning of “pastor,” regardless of what Saddleback is doing with it. The more important question is, what does article 3.1 of the SBC constitution mean by friendly cooperation with the SBC is for churches that have “a faith and practice that closely identifies with the Convention’s adopted statement of faith?” Which leads to a 3rd option …

Option 3: A Patient and Positive Hybrid – This would mean we are primarily confessional at the cooperation level while also defining more clearly what we mean in article 3.1. by “a faith and practice that closely identifies.” This option is a way to hold local church autonomy and a form of confessionalism in a healthy tension. Which would raise the important question, what does a church minimally have to believe to be Southern Baptist? Historically, the only thing a church needed to do in order to be considered Southern Baptist and to send messengers to the Convention was be a “Baptist” church and give financially to the causes of the convention. This all changed once Southern Baptists began adding both the negative and positive clauses that would disfellowship an SBC church, such as endorsing homosexual behavior, inconsistency on the Convention’s beliefs on sexual abuse, or discriminatory behavior on the basis of ethnicity, as well as the addition of article 3.1 in 2015. So, in some sense, the addition of the language of 3.1 makes option 3 a necessity. Pastor Mike Law of Arlington Baptist Church (Arlington, VA) is seeking a form of option 3 proposing a change to article 3 of the constitution to add an exclusion clause for any church that affirms women as pastors. That may well be the best way forward at the national level and/or the only immediate option.

Personally, I could get behind options 2 or 3, but would prefer option 3, with what might be a slight tweak to what Pastor Law is seeking to accomplish, one that would take a little longer. Again, in some sense, option 3 has been made necessary by changes to the Constitution. That is not a bad thing, even if it is an historical departure. It is a wise thing that churches who widely disagree with the BFM2000 cannot send messengers to the SBC with voting power. We must delineate who we are and the issue of who can hold the oversight office of the church as chief among them. I would propose then that article 3 have both a positive and negative clause that delineates who we are and who we are not. The negative clause, or who we are not, would combine our statements on homosexuality, sexual abuse, and racial discrimination. I would not include in that statement a negative form of our complementarian view, not because I don’t think that is an error, but because I do not believe it prudent to include it as a negative in the same way as homosexuality, sexual abuse, and racial discrimination.

Rather, I would address our clear complementarianism in a positive way.  So, we then add a positive clause of who we are, stating what we mean by “a faith and practice which closely identifies with the Convention’s adopted SOF” that would include what we clearly say in our SOF; that is the office of Pastor/Elder/Overseer is to be held only by men. This would include more from the BFM2000 such as inerrancy, justification by faith, believer’s baptism by immersion, regenerate church membership, but may not, for instance demand a “close communion” position for churches to be in friendly cooperation (though I would be fine with including the close communion position because I believe it upholds the importance of biblical believer’s baptism). These changes to the constitution, plus adding back in the word “elders” to the BFM, would take time to adopt and this would allow for clear, patient teaching on the matters, giving local churches time to search the scriptures, examine their practices, and adjust their practices to the standard required for friendly cooperation. Again, I am advocating for patience because I know of brothers who have inherited churches where women serve, for instance, with the title of children’s pastor. These pastors agree with our clear complementarianism and polity but need time to lead their churches toward change.

There are likely better proposals, but here is at least one attempt. May the Lord grant us grace, peace, favor, and faithfulness in these matters for the sake of His Name among the Nations.