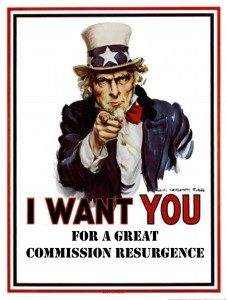 Recently, I had the privilege of writing an article for “Outlook,” The magazine of Southeastern Seminary. The topic given to me was “what Young Leaders were doing well and not so well in pursuing a Great Commission Resurgence?” That magazine is now available, check it out here, with articles about Muslims in Amsterdam, technology and Great Commission work, Convergent Church, and 20/20 conference that featured Mahaney, Driscoll, Akin, and Brown.

So with permission from the editor I make available my article here.

“Youth,” the adage goes, “is wasted on the young.” Perhaps this aphorism is true – it is at least partly true, in that young people tend to be long on energy and creativity and short on wisdom and patience. It might even be possible, in a general way, to apply this sort of thinking to young leaders in the Southern Baptist Convention.

To be sure, young leaders bring both positive and negatives to the table. Even a term like “young leader” often carries a great deal of baggage. The definitions of “young” and “leader” are certainly debatable. However, it is necessary to think through what younger evangelical and SBC leaders are doing right and what they may be doing wrong in the pursuit of a Missional Revolution. There are a number of strengths younger leaders can bring to a Great Commission Resurgence. I do not mean to insinuate that older leaders do not possess these traits as well. I am convinced we learned most of them from our Fathers in the Faith. This list also is in no way exhaustive, but I believe it gets to the heart of positive aspects younger leaders can bring to the table.

I.       Energy and Creativity- It is hard to deny that many of the younger strain are very passionate and driven. The vitality of the young is certainly a strength. Younger leaders bring a fresh perspective and usually newer methods and ideas on how to reach the culture. They can certainly challenge an established crowd think through new and exciting methods, while helping to steer them from traditionalism (in the negative sense).

II.    Theological Renewal- In many of the younger leaders I perceive a hunger for theological thinking and training. This seems to be spurred by the writings of men like John Piper, John MacArthur, and Mark Dever. Many younger leaders yearn to think deeply and think well. Many also want to discern what cultural traditions may have been handed down to us that are not biblical mandates. They seek to ask the question, “What does the Bible teach?” For most, a love for thinking and theology is attached to a passion for being faithful to the authority of Scripture.

III. A Missionaries’ Mindset- Many of the younger leaders employ what can be called a missionary mindset, in that they display great concern for the souls of the lost and use their energy to share the gospel. These young leaders are prepared to go to the tough places and initiate new ministries. Although, the word “missional” is not popular in some circles, many of the young leaders believe it simply means that you should possess a missionary mentality, regardless of the context in which you find yourself. There is much to be commended in this outlook. This mentality has captivated younger men; it is driving them to be church planters nationally in difficult places and it will lead them to be church planters internationally in unreached places. It is also exciting to see that there is no dichotomy for many of them between theology and mission. They are concerned both with mission and with theological/practical preparation for that mission. In my judgment, this flows right out of the Conservative Resurgence. Programs like the “2+2 program” display this, where those who hope to be in a cross-cultural mission setting see the need to be prepared for that context. This mentality is completely consonant with a Great Commission Resurgence and makes me excited to be on a seminary campus, like Southeastern.

IV. Expectancy- At times I and others have written and lamented the decline of younger men getting involved in SBC life; I think for good reason. However, it is difficult to understand that trend when you live on the Southeastern Campus. I am surrounded by men who are passionate to be church planters nationally and internationally, and many are committed, at least for now, to being part of the Southern Baptist Convention. If the SBC is infused over the next decade with hundreds of seminarians possessing a missional attitude  and serving the tough places of America and the unreached places overseas, then it will be hard to be pessimistic about the future. The younger generation is driven by this expectancy of a Great Commission Resurgence and the spreading fame of Christ. In many ways, it casts a shadow over the negatives and declining membership in SBC life. Many in this generation carry a mindset similar to William Carey, a Baptist in a previous generation, “Expect great things, attempt great things.” I, for one, think great days lie ahead because of the brothers I meet on this campus every day.

However, there is also the possibility of a downside. Some major dangers for younger leaders cast doubts as to the effectiveness they will enjoy in the future.  If these pitfalls are not overcome, the above positives will serve little benefit to the young leaders.

1.      Pride and Ageism (The following section is borrowed heavily from Scott Wilson’s article at Baptist21entitled “Is there Ageism in the SBC?“) – Pride and Ageism go hand in hand. All men struggle with pride, but especially younger men. There is a tendency to buck authority and accountability, and thus the danger of being driven by fame. There is a temptation to view your new and fresh ideas as the only ways to “do” ministry, while casting a negative glance at the work of older pastors, men who have been serving faithfully for decades. I am afraid that we are in danger of being myopic, something some young leaders accuse of the older generation of. If we see our “way” of ministry as “the” way, then we risk placing our preferences and ministries on equal footing with scriptural authority, much like we sometimes claim of the traditional methods. We carry the danger of being “ageists”, seeing older ministers as irrelevant and bothersome. We must avoid our culture’s tendency to cast a negative eye on our elders; this is a place for us to be counter-cultural. I think Scott Wilson said it best when he said, “has our generation become so arrogant that we think we have nothing to learn from those who have been in ministry for forty years, while we have been in ministry for two? We have only just begun to suffer for Christ; they have much to teach us, if only we would humble ourselves long enough to listen. Young believers and young pastors need to seek out older mentors, realizing their need to learn and grow. ”

2.      Follow through- A danger accompanying younger energy and creativity is a lack of reliability or work ethic. Once the freshness “wears” off, will the younger generation have “stick-to-itiveness” in their ministries, or will they walk away and fade away into obscurity?

3.      Capitulation to Culture- In an attempt to be missional, the danger is that we will take on the irredeemable qualities of the ambient culture. In an attempt to be relevant to culture, there is a danger for the young leaders to surrender those biblical truths and spiritual formation that separate us as followers of Christ. Some sectors of the Emerging Church already evidence this capitulation. Some men who are labeled as “culturally relevant” and in touch with the postmodern ethos have abandoned orthodoxy. We also see this in some so-called “Younger Evangelical Leaders.” At times, because of pride, they play to an audience that they should not “play to” when it comes to social issues that have never been consonant with Scripture. Either that, or they seek to be so culturally relevant that they let precious truths of the faith slide. If we do capitulate to culture, we will not be “relevant” to culture. A Great Commission Resurgence is relevant because it gets to the deepest need of mankind. We must not become driven by cultural relevance. Instead, we must be compelled by the authority of Scripture and a hope to see the glory of Christ invade this world. Otherwise, we will cease to be “relevant”.

4. Isolationist Attitude- In some sectors of younger leaders there also seems to be an isolationist mentality that says, “I will go plant my own church and do my own thing.” They are suspicious of accountability, do not like the methods of others in a convention, and are unhappy with some other (often minor) aspects in a convention. This results in a number of them leaving. The exodus of young leaders from the convention is potentially damaging to a Great Commission Resurgence, and these younger leaders will not be as effective in pursuing a Great Commission Resurgence on their own as they thought. The younger generation needs to step up and be men; we do not need to abandon cooperation because some in a convention criticize us, do not invite us to speak, or because the convention has imperfections.  Instead, we must realize that we will be stronger together and more effective through cooperation. A Great Commission Resurgence is not to be undertaken alone. We do not need to “stick our noses up” toward the very convention that paid for our education, in many cases delivered to us the gospel, and taught us to trust the Bible as the inerrant Word of God. Instead, we should be prepared to do the hard work of being involved and then let our voice be heard. This will not happen overnight. However, as a band of brothers who are like-minded, let’s stay, serve, and then speak. Instead of leaving, younger leaders should pursue the benefit of cooperation toward the end of a Great Commission Resurgence.

5.      Neglect of the Spiritual Disciplines- Finally, I think many of these failures occur because we neglect spiritual formation. We are so indoctrinated with being on mission that we forget the immense importance of “the character” of the man on mission. It is not enough to be on mission and relevant to the culture if we are not grounded enough to recognize what is redeemable and what is irredeemable in the ambient culture. This takes a man of great discernment, and sadly, many of my younger generation cannot be categorized as possessing this discernment. We are younger and that simply means we still lack much of the wisdom and maturity of older brothers in Christ. If we are so concerned with culture that we neglect protecting our own souls, we will not be the missionaries we are called to be.

In the end, a Great Commission Resurgence, a Missional Revolution, whatever you want to label it, is the goal. It is the natural outgrowth of the Conservative Resurgence launched in 1979. The goal is the fame of Christ spread to the peoples of all nations. Younger leaders must seek to avoid the pitfalls that come from being young; we need to immerse ourselves in Scripture, its disciplines, and the counsel of older, godly brothers. We must continue to pursue a missionary mentality, understand the danger of a life lived apart from Christ, and we must not back down from being passionate about sharing the glories of Christ for the fame of Christ. What I am hoping for, especially among our Southern Baptist brethren, is a multitude of foot soldiers in a Great Commission Resurgence, an army set to war for the fame of Christ, even as we pray the prayer of the saints throughout the ages, “Come quickly Lord Jesus.”