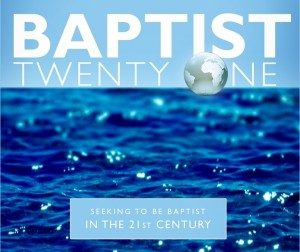 One of the goals of baptist21 and one of the contributing factors to its formation was the hope to encourage more activity and participation from younger SBC’ers. It was and is our hope to compel more of the younger generation to stay in the SBC as well as persuade others to join. Our Purpose statement says, “We pray that this vision will be compelling to younger Baptists who have left or are contemplating leaving the SBC, and that Baptists of all ages will continue to cooperate together in the cause of the Gospel. We believe the Gospel is relevant to every man and woman in every culture, as it calls all to repentance of sin and faith in Jesus. Our goal is to bring the gospel to bear on contemporary issues in the church and the world. This will mean engaging culture, using culture, rebuking culture and redeeming culture.”

We believe that the upcoming Convention in Louisville is vital for the vision baptist21 has for the future of the SBC. Part of that vision is that we want more young guys to stay in the convention, so we want them to attend the annual meeting. More than that, we want them to be active in the convention and participate in the annual meeting. The reason we want this is not in anyway for the name of the SBC, but rather for cooperation in the Great Commission. We believe in the SBC, and operate b21, because we still see this convention as possessing best the tools to do Great Commission work. We still believe the SBC is the place to show how the “gospel IS relevant to every man and woman in every culture, as it calls all to repentance of sin and faith in Jesus.” This upcoming Southern Baptist Convention could be vital towards that end, as we see much activity from the “Great Commission Resurgence.” This convention in Louisville in many ways could shape the future of Southern Baptists, and so we want young guys to have their voice heard. SO WE CALL ON ALL YOUNG SBC’ers TO COME TO LOUISVILLE!

So why should young SBC’ers (and really all SBC’ers, younger just happens to be our peer group) come to the Southern Baptist Convention?

1.       A good lineup of speakers- This year’s convention promises a great line up of preachers and speakers, and many are from the younger crowd or will address issues that are important to younger SBC’ers. The Pastor’s Conference features JD Greear, Ed Stetzer, Francis Chan, Alvin Reid, Johnny Hunt, and David Platt. The Convention itself will be featuring Great Commission Lectures from David Platt, Danny Akin, Jeff Crook, and Vance Pitman (a young planter in Las Vegas). In addition, Johnny Hunt’s Presidential address promises to deal with some of the major concerns of the SBC. Those who decided this year’s speaking lineup did so with us in mind. This lineup, perhaps more than times past, is very compelling to the younger crowd. So please make it a priority to attend.

2.       The extra events outside the official Convention time– In addition to the great lineup of speakers at the SBC, there are several events of great interest, again especially to a younger audience. These events include some of our favorite thinkers and speakers.

a.       First, there is 9Marks@9. This event features Mark Dever speaking on “Why the Nine Marks are Central to the Future of the SBC” (Monday@9pm) and Danny Akin speaking on “The SBC: Where We are and Where We’re Going” (Tuesday@9pm). Monday night will also feature a panel discussion with Mark Dever, David Platt, and Greg Gilbert, and Tuesday night will feature a panel discussion with Mark Dever, Michael McKinley, and Josh Smith.

b.      Second, there is the Founders Breakfast (Tuesday@6:30am). This event features Danny Akin speaking on “”Creeds, Deeds and the Great Commission.”

c.       Third, there is our b21 panel. This event features Ed Stetzer, David Platt, Albert Mohler, Daniel Montgomery, Danny Akin, and Mark Dever. They will be speaking and answering questions on a variety of topics, such as: The Future of the SBC, The GCR, The Primacy of the Local Church, What the SBC does well, and What needs to change.

So there is plenty being done around the convention to offer worthy events. We believe these events are important and will speak to our future and the future of the SBC.

3.       A Chance to network with likeminded brothers– The Southern Baptist Convention is a place to meet fellow laborers for the Lord Jesus Christ. Especially with the events outside the convention time mentioned above, it will be a time to meet like-minded brothers who could be an encouragement to you and your ministry. We believe that cooperation is a good thing, and increasingly cooperation is not bound by geographical lines. B21 is an example of that. The SBC in June could be a time of meeting pastors that you could partner with and encourage for greater Kingdom effectiveness.

4.       It is time we get involved- We, the younger generation, should not have a seat “at the table of the SBC” if we will not get involved. “Getting involved” means attending these meetings, on the state and national level. It does little good for us to criticize state conventions for keeping too many CP dollars in state if we will not show up and vote. It will do little good for us to call for a GCR and not show up and vote for GCR related motions and resolutions at the national convention. The reasons you should be involved are numerous. We have mentioned those in our blog “Y We R and Y We Think U Should B SBC.” But quickly lets look at why. If you want to have a say in how we do missions, church planting, theological education, and mercy ministries, then you need to show up and vote. If you think we should reallocate our monies in other ways to be more effective, you need to show up and let your voice be heard. In addition, another reason Pastors should get involved at the state and national level is that they are called to be stewards before God of the resources they send on to state and national conventions. In fact, this is becoming one of the major areas of concern raised to b21 as to why many pastors are in favor of examining restructuring, especially at the state level. But, if you are unhappy with how your resources are being spent as they are sent on to the state and national level, then show up and vote. If it is worth being involved and we want our voices to be heard then we need to play a part.

5.       There are potential decisions this year that will affect your future in the SBC– I believe that this year is a pivotal year in the life of the SBC. Many have sounded this alarm. In particular, for those that we are trying to write to, this convention is important. We have made it no secret that one of our aims is greater involvement of younger pastors. We know there are many frustrations with the SBC from some of the younger crowd (again I mention the younger crowd because it is our peer audience, we know there are plenty older than us that have frustrations with the SBC), but we believe that the Great Commission Resurgence is trying to answer some of these frustrations. It is true that many younger SBC’ers are frustrated with the bureaucracies and with what they perceive is ineffective use of resources. In addition, they are frustrated with many of our church planting mechanisms. We at b21 believe in the GCR and believe that is trying to address these frustrations. That is why we think that it is vital to the future of the SBC and the GCR that you show up at this year’s convention and support it. If you think the SBC has great potential for missions, church planting, and theological education and you want to be a part of it, but want change, show up and support the GCR and encourage as many as you can to do so as well. I am afraid that if we get to the precipice of change (as the GCR is advocating we study) and back off, we will see a mass exodus from the convention and I do not want to see that. If things come up from the convention floor that pertains to these topics, especially the GCR, be there and vote. I hope you will call on your spheres of influence, because I believe that we are at a turning point and if we push “pause”, it will be damaging to the future of the SBC, especially in terms of sending missionaries to the unreached places of the World (which is already happening) and planting churches in the Urban Centers of America. We at b21 love the SBC.  It is the mechanism that we want to be a part of for future kingdom effectiveness, and we believe its vitality in a very real way will be addressed in June in Louisville. So we hope that Young (and older) will be heard and come out in force for the GCR and the future of the SBC. We pray that your involvement will mean that the SBC lives up to the goal of our Forefathers, “combining and directing the energies of the whole denomination in one sacred effort, for the propagation of the Gospel.”