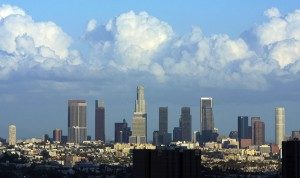 Below is part 2 of Walter Price’s California Baptist State Convention President’s Address. Walter Price is the Pastor of Fellowship in the Pass Church in Beaumont, California.

Let’s remind ourselves what is at stake? Evangelism/Missions: We live in a state with almost forty million people who are more un-evangelized than many other countries even in the 10/40 Window. With only twenty-one hundred churches we desperately need to work together to increase our witness.

Education: Also, we own one of the greatest Christian universities in the world. We must be ever diligent to maintain CBU as a distinctly Christian university, confessional in its nature, with a biblical worldview. I love the fact that our university identifies itself as a Great Commission University. But, lest we ever forget, the Great Commission is about the spread of the Gospel of Jesus Christ. And I for one, to my last breath, will strive to keep it true to its calling.

Compassion: Disaster relief; concern for the poor and hurting; these are the kinds of areas where so much more can be accomplished as a community of churches rather than individually. In each of these areas I would suggest that our focus needs to be less on what the state convention can do for our churches and more on what our churches, together, can accomplish through cooperation.

How should we respond? First, some wrong ways. In Isaiah 39:1-8 we have the unbelievably selfish story of Hezekiah. When the representatives of the King of Babylon came to offer gifts to him he took them into his treasure house and throughout the land and showed them all that he possessed. Isaiah came and asked him what on earth he had done. Then he prophesied that everything Hezekiah had, everything he had shown them, would be taken to Babylon along with his own sons who would become eunuchs there. Listen to Hezekiah’s response: “The word of the Lord that you have spoken is good.” For he thought, “There will be peace and security in my days.”

Some in my generation seem to have the myopic attitude of Hezekiah. Just don’t inconvenience me. Let someone worry about it when I’m gone. The CSBC has worked great for a long time. Don’t worry, it’s fine. Legend has it that’s what was said about the Titanic, even after striking the iceberg.

Another wrong response: Sadly, there are those in our national SBC who are already publicly positioning themselves to oppose the report of the Great Commission Resurgence Task Force, without even knowing what the report will say. Indeed, it hasn’t even been agreed upon or written yet.

Often our polity is at one and the same time our greatest strength and our greatest weakness. It is strength when the various autonomous entities work hand-in-hand for the good of the Kingdom of God. But it becomes a deep weakness when cooperation devolves into competition, togetherness into turf protection and synergy into selfishness.

1    But I, brothers, could not address you as spiritual people, but as people of the flesh, as infants in Christ.

2    I fed you with milk, not solid food, for you were not ready for it. And even now you are not yet ready,

3    for you are still of the flesh. For while there is jealousy and strife among you, are you not of the flesh and behaving only in a human way?

5    What then are all these, Servants through which the churches do kingdom work as the Lord has assigned to each.

We are all Southern Baptists. And please don’t respond with another tired joke about Baptist bickering. The time has long since passed for us to be ashamed of that reputation. That’s one of the main reasons the younger group has no interest in showing up at these conventions.

We do not need a new program or new slogan. Slogans can be effective rallying cries. Programs can be useful tools. Slogans and programs might have their day once again. But now is the time for transformation. We desperately need the guidance of the Holy Spirit to give us wisdom. My prayer is that God will do that. I do not presume to know the mind of the Lord. I can only hope and pray that He is not finished with us yet.

A New Way of Cooperation

In the aftermath of that horrendous event there was talk of the school children and, indeed, the entire Amish community finding what psychologists call a “new normal.” When there is a catastrophic crisis nothing will ever be the same. The situation demands a new normal.

That’s what I’m proposing today–a new way to do cooperation. We must find a new normal. If we do not become pro-active in this endeavor, the crisis is coming, the iceberg is dead ahead. It’s not a question of if it comes but rather when.

In the aftermath of the sinking of the Titanic some very disturbing facts came to light. Perhaps the most significant was that the ship was not designed to withstand the rupture of the watertight compartments below deck. From the moment the problem became known, the designers of the ship knew it was doomed. It will not be enough for us to simply change course to avoid the iceberg. We need nothing less than a redesigning of the ship

What is that new normal? What is the new way of cooperation? I wish I knew. I wish someone else knew. But I have yet to talk to anyone who seems to have the answer. What I am crying for is the conversation. I’ve tried to begin it this year. Every time I’ve had the opportunity to address one of our entities I’ve said the same things I’m saying today in abbreviated form.

We need the right people in place to lead the discussion and we need to bring the right participants to the table for the most profitable input. All of us need to be willing to see radical change. On a larger scale than just us California Southern Baptists we need to find a way to transform the entire fleet, that means national, state and associational, not just our ship. But again, our autonomous polity will probably prevent that from ever happening.

Recently, I had the privilege of sitting down with two different groups of young pastors in their 20’s and 30’s. To say that I was deeply impressed by their hearts and their insight is to make a gross understatement. But there was one particular moment in one of those meetings that stands out to me. I want to leave you with this thought.

I asked the question: “If everyone in a position of any kind of leadership in our state convention age 50 and older dropped dead today, what would happen?”

For a few moments there was an intense silence. Then one of the young men said very quietly, “Well, I guess we’d have to start over.” To which another responded, in an almost anguished tone, “If we wanted to.” And they all nodded their heads.

I beg you. Let’s give them a reason to want to.

Check out the beginning blogs of our vision series, “SBC21: The Duties and Dangers of This Present Hour” (more to come in the future): Blog 1, Blog 2, Blog 3, Blog 4, and Blog 5