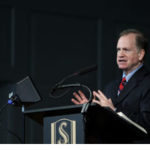 With the B21 Panel coming up in less than a week, our excitement is building about this important time of discussing current issues in SBC life and the future of our convention. Of course the highlight of our upcoming panel event will be gaining insight and wisdom from the godly SBC leaders that have graciously agreed to be a part of this special day. We are so glad that one of the leaders who will be a part of the B21 panel is Dr. Daniel L. Akin, the President of Southeastern Baptist Theology Seminary , in Wake Forest, NC. It is my pleasure to introduce Dr. Akin, who is father to two of our B21 writers and a mentor to several other writers on our blog (myself included), to those B21 readers unfamiliar with him and his work.

Dr. Akin earned degrees at both Criswell College and Southwestern Seminary (SWBTS) before earning his PhD at UT Arlington. He has served in various teaching and administrative roles at Criswell College, Southeastern Seminary, and Southern Seminary (SBTS) before returning to Southeastern (SEBTS) in 2004 as President and Professor of Preaching and Theology. Dr. Akin has written numerous articles and books. Some of Dr. Akin’s most well-known books include: Epistles of John in the NAC series, God on Sex, Five who Changed the World, and his edited work, Theology for the Church. Dr. Akin, along with other professors from SEBTS, contributes to the well-read blog, Between the Times.

In addition to his responsibilities at Southeastern and his writing ministry, Dr. Akin also has a preaching ministry which carries him all over the United States. He can be found in the pulpit of an SBC church on nearly every weekend of the year. Despite this demanding schedule, Dr. Akin models for those of us in ministry two primary commitments—to his family and his local church. Dr. Akin has been a loving husband to Charlotte, his wife of thirty-one years. Dr. Akin is also the proud father of four sons, each of whom is either preparing for ministry or currently in ministry (two sons are on the mission field, one is in seminary, and one is pastoring a church in KY). The Akins are faithful and active members of Wake Crossroads Baptist Church where Dr. Akin teaches each Wednesday evening.

Some previously unfamiliar with Dr. Akin have come to know him because of his key role in the Great Commission Resurgence (GCR) movement. Dr. Akin defined the key principles of the GCR in his address “Axioms for a Great Commission Resurgence,” which was delivered on April 16th in the chapel of SEBTS. This address contained twelve axioms for a GCR which have been helpfully summarized here. Following this address, Dr. Akin co-authored with Dr. Johnny Hunt, the current president of the Southern Baptist Convention, the GCR Resolution document, which contains ten essential articles for a GCR in the SBC. You can read the resolution and add your signature supporting the GCR here.

While the two B21 writers who are sons of Dr. Akin could certainly speak more personally about the impact Dr. Akin has had on their lives, I know that along with many other students at SEBTS, I can speak for the impact that Dr. Akin has had on me. While Dr. Akin would be the first to confess that he is far from a perfect man and is a sinner saved by grace, he models for me, and so many others, what a man in ministry should be. He is a scholar who loves the Word of God. He is a husband and father who loves his family. He is a seminary president who loves the students he serves. He is a churchman who loves and serves in his local church. He is a convention leader who loves the denomination that trained him and has entrusted him with his position. But most of all, He is a follower of Christ who loves King Jesus! Thank you Dr. Akin for being a part of the upcoming B21 panel event–we at B21 and our readers look forward to hearing from you.