Developing a Middle Ground: The Church 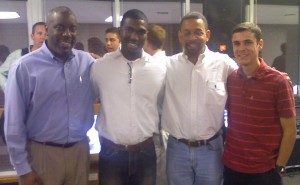 Many of us (even myself at times), cringe when it comes to talking about the issue of diversity in the church. In this blog it is not my goal to use the guilt of the past as a bludgeon to move believers into action, but to begin a conversation that assumes that we are the generation that is capable of more than agreeing that change needs to happen. So let’s go to work for the Kingdom.

I often daydream about a scene of an unchurched person walking their dog one late Sunday morning. As this person and their pet turn right on the main road, they peacefully walk by the local church as the service is being let out. As this person and their pet walk by, the pet owner begins to notice that there is something peculiar about the scene in the church parking lot, but cannot quite put her finger on it. There are people of different ages, socio-economic status, and ethnicity in joyful community as they make their way to their vehicles. The pet owner continues on with her walk, but is often reminded about what she saw in the parking lot that day.

The closest scene that resembles my daydream is in a parking lot after a ball game when home team is victorious. But the trivial rallying point of athletics pails in comparison to the weight of the human soul being made alive in Christ, and living in biblical community (the church) with believers from all walks of life. Stated plainly, it is no task to rally diverse individuals for something external to themselves (sports, music, politics), but gathering diverse individuals into the bond of brotherhood for the sake of God’s glory strikes at the core of humanity: particularly a humanity that has been made new in Christ.

As I began my own ministry I struggled when it came time to find a church to serve. My desire was to serve an economically, generationally, and racially integrated church, but the reality was that I had two primary options, serving in a largely African American church, or in a mostly Anglo church. As I began to struggle through these issues, my heart began to long for some sort of middle ground.

I began to promote an abstract concept of what a middle ground ought to look like, but my ideas proved to be hollow and superficial. As a result of my hollow conclusions, I began to meditate on scripture, and a fairly simple vision developed. The middle ground that I longed for was the Church, the Church in all of her intended glory, as an earthly manifestation of the Kingdom of Heaven. With that said, I do not want to over simply the issue by stating the obvious (namely, the church should look like Heaven) because believers are agreeable to such a goal, but the difficulty is developing a process for the Church to arrive there.

An important step for the church to make toward mirroring the Kingdom of Heaven is to have candid conversations that span across cultural, socio-economic, and generational lines that are rooted in genuine relationships. Christians across this country desire unity in the body, but are afraid of having blunt conversations because the last thing they want to do is offend their brother or sister in Christ. As a result of this fear, thousands of Christians are walking around with good Kingdom intensions, but are crippled with the anxiety of the unknown.

A special note on the issue of race: By encouraging conversations across cultural, lines that have been drawn for us in generations past, I am by no means asking everyone to turn off our brain and erase our nation’s history from our minds. Our history is a part of our heritage, and its effects are real and should not be ignored. On the other hand, I encourage each of us to ponder the fact that the primary identifying mark of the believer is Christ, not race (Col. 3:1-11). As those who identify themselves with the Gospel, we are new creations and have been given the ministry of reconciling to all men and woman to Jesus Christ, crossing racial, linguistic, socio-economic, and generational barriers (2 Cor. 17-20).

In my humble opinion, there has never been a generation in this nation’s history that is more capable of having God honoring and candid discussions about Kingdom issues as those who comprise the church today. In generations of old the goal for Christians was to be blind to race and culture (treating everyone as though they were the same), but I think that is less than an ideal solution. In the current cultural milieu, the celebration of diversity does not have to be sacrificed for the sake of unity. In fact, the diversity of the body under the unifying blood of Christ is a powerful testimony to those both inside and outside of the church.

It is not our intent to lob a series of ideas into the blogosphere. We would like to model (to the best of our ability) how these steps flesh out in real life and ministry. Attached to this blog is a conversation that I had with some friends, and I pray that it would be one of many honest, Christ-centered, Kingdom minded conversations that are had across the country. Of course you do not have to cover the same issues or content that we covered, these are just issues that we thought were important (you do not have to have a moderator either). If you have any questions our suggestions about anything pertaining to these, issues please comment below and the Baptist 21 crew and I would be delighted to interact with you.

Diversity and the SBC Interview