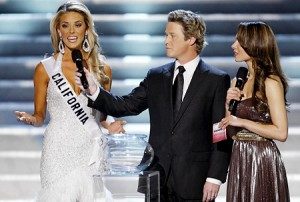 Growing up it seemed that nearly every movie I watched ended with the moral imperative, “follow your heart!”   And the implication is that as long as you trust your heart and act accordingly you can’t go wrong.  Recently, I was reminded that this idea is far from fading.  A couple of fresh examples are the latest season of The Bachelor and Miss California Carrie Prejean. In case you missed the very public breakup on The Bachelor, Jason, a charming young single dad narrowed his selection down to two.  After much deliberation, Jason gave the final rose to Melissa only to dump her a few days later on national television for the other contestant, Molly.  The second example comes from the recent hoopla over Miss California’s response to the question regarding gay marriage.  After Perez Hilton asks whether all fifty states should follow suit with the recent Vermont decision to legalize gay marriage, Carrie Prejean boldly responded that she believed marriage should be “between a man and a woman.”

As expected, both The Bachelor and Miss California received mounds of scrutiny and criticism for their decisions.  To be clear, I’m quite indifferent about Jason’s decision between Melissa and Molly, yet am rather proud for Prejean’s stance on marriage.  My interest, however, is neither in Jason’s choice nor in Prejean’s answer, but rather the way in which they defended their answers to various media and talk show hosts.  Both were pleased to rest their case with the comment that “I am following my heart.”

This interest in the “follow my heart” motif is particularly heightened by the counsel I heard a church member give to a few young teens some weeks ago.  A couple teenage boys were wrestling with a spiritual decision and the counsel given was a mix of ‘what does the bible say?’ and ‘what is your heart telling you?’  And the latter drastically eclipsed the former.

So, how should Christians think about this?  First, we must recognize the influence of the media and entertainment on our daily decision-making.  This is not suggesting that we should get rid of our televisions and computers.  Rather, we must be active in our intake of various media sources and not passive.  In other words, be careful not to simply allow whatever is playing on the tube to soak into your soul because you’re tired from a long day and don’t feel like thinking about what’s being communicated.  Be sure to constantly filter the media through the grid of Scripture.  Some things can pass thru with no problem, some things should be quarantined for further consideration, and others must be immediately rejected.

Secondly, and most importantly, Jeremiah 17:9 states, “The heart is deceitful above all things, and desperately sick; who can understand it?” (ESV)  The counsel of “follow your heart” is a very dangerous one.  The New Testament consistently reminds us to ‘not be deceived’ either by deceiving ourselves or by allowing others to deceive us (1Cor 3:18, 6:9, 1John 1:8, James 1:16, Gal 6:7).

Brothers and Sisters, the harsh reality is that far too many Christians operate under a “follow your heart” model.  This is the kind of thinking that leads a wife to leave her husband because “she doesn’t love him anymore.”  This is the logic that encourages the man to ‘come out of the closet’ because he believes “God wants me to be happy.”  When a person’s heart becomes his/her primary counselor the results are soon to be disastrous.

Let us return to Scripture as our highest source of authority.  Let us couple this with godly counsel from other brothers and sisters (preferably older ones) who can provide correction, instruction, and wisdom.  Let us “keep a close eye on this heart of mine” and constantly weigh it against the Word of God that is profitable for teaching, for reproof, for correction, and for training in righteousness.  Proverbs sums it up well; “There is a way that seems right to a man, but its end is the way to death.” (14:12)