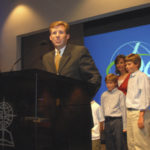 You can find part 1 of this article here

3. The forced resignation of Clark Logan Vice President for Business and Finance.

The story broke last week that Clark Logan resigned on July 1 (though some speculated at first that he may have been fired). This caused the “Twitterverse” to be abuzz with speculation as to the reason for the abrupt resignation. Southern Baptists were calling for an explanation of what was happening but no explanation was forthcoming (BP has yet to run the story which, as mentioned, may reveal an agenda). The Twitterverse also has been abuzz with declarations from pastors and leaders around the convention of what the future should be for the EC and its leadership. Initially members of the EC had no idea that it had happened or why it had happened (and there are indications this is still the case). Several days later Logan released a statement that he had been asked to resign, but Logan wanted to make it clear that it was NOT for an unethical or immoral reason. Dr. Chapman acknowledged that Logan had not been involved in unethical or immoral actions but declined to comment any further or confirm that he asked for the resignation. Dr. Chapman gave no reason for the forced resignation (see the article here). The people of the SBC are screaming for an explanation but will likely get very little.

Let me be clear. Denominational executives should be able, in my opinion, to fire any employee that they feel does not fit with their team. This is the task of leadership. However, that does not give the right to denominational leaders to blindside, not give opportunities for course correction, treat harshly, or to cover up the actual reasons for their actions. And, the responses to those actions show the confidence (or lack thereof) in the leadership who makes the choices (see below).

Immediately the tweets about this situation began to come out and multiply. They ranged from speculation for the reason of the resignation to outrage at the direction the EC is going. Many expressed confusion and questioned what was exactly at the heart of the resignation. Some have speculated that political affiliation with those pushing the GCR or Logan’s being vocal about needed changes within the EC led to this action on the part of the EC. Here is a sample of some of the speculation and outrage in the twitter discussion:

@tomascol: is wondering if a prominent denominational executive has jumped the shark

@pastorclint: It’s time for a change at the top.

@drmoore has heard from younger Southern Baptists all over the country who also stand with the Logans. #ClarkLogan

@pastorjcox Thinking that things seem a little fishy in Nashville and wonders what’s really going on behind the scenes. #clarklogan #sbc2009

@nathanlino RT CentralRev, EC trustee: Been dealing with Logan resignation all day. Does not seem to be merited. Grieved for all involved! #ClarkLogan

ftras @TommyRedding yep, we need more info, but it seems that the GCR is at the heart of this #clarklogan

@albertmohler A man who has no reason to fear the truth deserves the eager support of those who love the truth. The truth will come out. #ClarkLogan

@JimmyScroggins The SBC needs a restructured bureaucracy. We will have it. But it won’t matter unless trustees hold guys accountable. #ClarkLogan

Simply put, regardless of what happened, many in the SBC are questioning the leadership at the EC as a result of the forced resignation of Logan.

The EC and its leadership have openly opposed the GCR. Dr. Chapman took time in his address to question the need of a GCR in Southern Baptist life. Yet, the messengers spoke with overwhelming clarity by over 95% that this is what the convention wants. Dr. Chapman stood firmly against the idea, and Southern Baptists decided he was wrong. This is yet another example that the EC may be out of touch with the convention it is supposed to act for “ad interim” 363 days a year.

The message continues to come from the EC that everything is ok and there is no need for reform in the system. Indeed, the message from the top at this year’s convention was that we do not even need to ask questions about our system. Dr. Chapman upheld this in his address by quoting a statistic that he also mentioned in his article criticizing the GCR that “95% of the SBC’s receipts” go to missions, relief efforts, theological education and church planting. He says that this budget structure keeps “us focused on the main thing.” But, the statistic is not exactly accurate. What the EC never seems to point out is that this is the percentage giving NOT of CP monies that the churches give but rather of the money that actually makes it to the national convention after the state conventions take their cut, which in most states is over 60%. In a state like Kentucky only 18% of CP money gets to the mission field. Southern Baptists are told that our money goes to the things we want emphasized, but this is not the whole truth, and the EC seems happy to perpetuate this system in which state conventions receive most of the money.

The main question emerging from these events is, “who is going to hold the EC accountable?” The EC and its leadership are accountable to the churches, but the trustees are the ones entrusted by the convention with this responsibility. Trustees need to walk a fine line between micro-managing denominational leaders and giving them Cart Blanche. When it is necessary to take action though, trustees must have the wherewithal to do so. Many are asking the question “is it time for the trustees to act?”