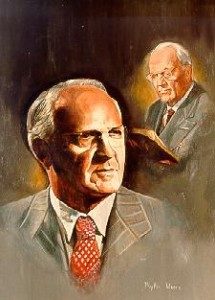 The charge has been made recently that many young Southern Baptists do not fully appreciate Southern Baptist heritage. No doubt there is some truth in what has been said. In our zeal to adapt and push towards the future many of us have neglected, forgotten, or even criticized the past. It is true that sometimes younger SBCers treat the SBC like the cousin you are afraid for your friends to meet. Southern Baptists are certainly not perfect, nor is our history. However, there have been wonderful characteristics like faithfulness, evangelistic passion, missionary zeal, cooperation, theological education, and triumphs in our past (and in our future by God’s grace). There are also godly men, pastors, preachers, missionaries, professors, who have gone before us. These men are heroes who faithfully followed King Jesus and led others to follow Him. Part of the purpose of Baptist 21 is to honor, respect and learn from the past, specifically from godly men and women who have run well and with great endurance the race set before us.

Robert Greene Lee was one of those men that we believe younger Southern Baptists need to get to know. Indeed, Baptist 21 is grateful for the ways God used RG Lee. Not to sound cliché, but he is a giant upon whose shoulders we stand. We want to over a few posts highlight his ministry and ask what we can learn from him for ministry in the 21st century.

RG Lee was born in a log cabin to poor sharecroppers in South Carolina on November 11, 1886. Mam Lindy, Mrs. Lee’s midwife, said at his birth, “Praise God! Glory be! The good Lord has done sent a preacher to this here house” (Lee, Payday Someday and Other Sermons, 5). Lee trusted Christ at the age of 12 in the First Baptist Church of Fort Mill, South Carolina. Lee was a hardworking, blue collar Southern Baptist. He worked on the Panama Canal at the age of 21. He delivered newspapers at 4 AM every morning walking his eight mile route in order to pay his way through Furman University. He also pastored a little country church up in the Mountains in order to pay school bills. The church paid him 50$ a year for one sermon a month. When the topic of a raise came up, one of the longstanding deacons, spitting tobacco from his mouth, said, “We’ve been paying 50$ for a long time. And, we can’t afford now to bite off more than we can chew, or swallow, or digest. And, as far as I’m concerned we’re paying for as much as we’re gettin” (Lee, “What Have I Done,” audio). Not only was he a hard worker, but he was also a brilliant student who graduated magnum cum laude. One of his most significant crossroads came when Dr. E. M. Poteat, the president of Furman University, who mentored Lee, asked him to chair the Latin department at Furman. Lee soon found out that the university would not allow him to pastor and teach at the same time. He resigned, and his wife Bula said, “That’s good! God never meant for you to dig around Latin roots. He meant for you to be a preacher” (Lee, Payday, 5). Lee pastored churches in South Carolina, Louisiana (FBC New Orleans, adding over 1,000 new members in his four years), and Tennessee (Bellevue Baptist Church, which grew to over 10,000 members in his 33 years). He served three terms as president of the SBC and four terms as president of the Tennessee Baptist Convention. Not only was he a gifted preacher, but he was a brilliant scholar. He turned down presidencies at Union University and New Orleans Baptist Theological Seminary (see more biographical information about Lee at http://www.siteone.com/religion/baptist/baptistpage/Portraits/lee.htm).

What can we learn for ministry in the 21st century from the life of RG Lee?