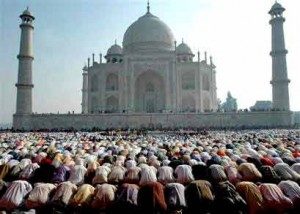 By Rony Tomo, Guest Blogger Working With Muslims in the Middle East

Jesus said, “I will build my church and the gates of Hades will not prevail against it.”  Few verses in the Bible provide more encouragement to the fulfillment of the Great Commission.  As followers of Christ, we know that one day every knee will bow and every tongue will confess that Jesus Christ is Lord.  Yet, in the meantime, the Church is faced with numerous challenges that stand in the way of its mission.  Perhaps at the forefront of those challenges in the global context is the stronghold of Islam.

Islam is a religion that began in the sixth century AD now boasts over 1.5 billion adherents, making it the second largest religion in the world.  Numerous publications cite that Islam is also the fastest growing religion in the world, with a growth rate of 2.9% between 1970 and 2000 (due primarily to high birth rates).  The significant growth of Islam in places like Europe has been well documented in the past few years.  This phenomenon has led one writer to state, “Islam is already the fastest-growing religion in Europe.  Driven by immigration and high birthrates, the number of Muslims on the continent has tripled in the last 30 years.  Most demographers forecast a similar or even higher rate of growth in the coming decades.” This quote and others like it demonstrate the challenge that Islam presents to the fulfillment of the Great Commission.

In all the talk recently about a Great Commission Resurgence, I have been thinking about what that may look like on a practical level.  As an international worker I have prayed for the day when more churches will possess a heart for the nations, more money will be allotted to accomplish God’s task around the world, and more people will focus on making disciples as opposed to just making “converts.”  These, among other issues, express what I desire to be accomplished with the GCR.  But I want to narrow my focus and look more closely at the impact the GCR will have on confronting Islam around the globe, because a GCR will mean more than restructuring or reallocating funds.  It will mean planting churches in cultures dominated by Islam.

When people embrace the vision to follow Christ to the ends of the earth and to shout the announcement of His Kingdom to the Muslim world, one must wrestle practically with what that might look like in our 21st century context.  Will they even listen?  Will they understand the message we bring?  Will they ever believe?  No doubt, the task will be difficult.  In the coming post I want to give you a glimpse into the life of a devout Muslim.  I want to draw your attention to some common barriers that believers face when engaging Muslims in conversation about Christ.  At the same time, many of what are initially seen as barriers can later be used as bridges to draw one to a better understanding of Jesus and the Gospel.  I will share what I believe to be the three most common barriers and bridges for a devout Muslim who is dialoguing with a follower of Christ about the truth of the Gospel.