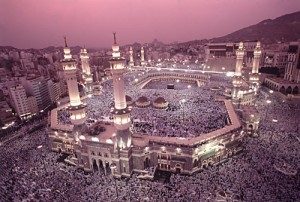 By Rony Tomo, Guest Blogger Working With Muslims in the Middle East

Part One, The GCR and Islam

First of all, I must make it clear that I am sharing about my encounters with devout Muslims because I have had the most contact with them.  To clarify the term, devotion does not mean that one wants to join a terrorist network.  However, devout Muslims do take their faith seriously, and as a result of that reverence, at times they may seem to express sympathies for violent organizations.  Devout Muslims will pray 5 times a day, refrain from drinking alcohol and eating pork, will regularly read and study the Qu’ran, and will seek to live life after the example set by the prophet Muhammad, or at least the example they have been taught that Muhammad set.

Now, I want to begin by sharing three common barriers that one will likely face in a discussion with a devout Muslim about Jesus and the Gospel.  Some of these barriers will be present in a conversation with any Muslim, but these three specifically are common when talking with an individual who takes the Islamic faith seriously.

Conclusion: Do not begin your conversation by saying “Jesus is God’s Son, deal with it…”  Perhaps it would be best to begin somewhere else.  Some have suggested that it is more effective to highlight the actions and declarations (miracles, authoritative commands, and forgives sins) that demonstrate Jesus’ deity.  Approaching the deity of Jesus this way allows one to establish that Jesus is God, while at the same time avoiding a problematic term.  In light of this dilemma, make sure that you get to Jesus.  The Gospel is all about Jesus.  Without Him, you do not have a message worth sharing in the first place.

Conclusion: There is no way to avoid this discussion.  Defend the Bible.  Demonstrate that you have a high respect for the Word of God, read it in front of them, and read it and share it with them.

Conclusion: Explain that not all people who claim to be Christian truly are, just as all people who claim to be Muslim are not truly Muslim.  Then explain to them the life of a true Christian.  Tell them that you strive to live a life that is pleasing to God, following after the example set in the Scriptures, and that you are a strong advocate of prayer, Bible reading, helping orphans/widows/poor, and that you seek to model your life after the example of Jesus in the Bible.  At the same time, we must be clear that living a “good “ life is not possible on our own.  On our own strength, we will fail.  The good news that we have for the Muslim is that Jesus came and died on the cross because of our sin, so that we could be forgiven and have our hearts changed.  As a result of a changed heart, we now strive to live holy lives, not because we are trying to gain God’s approval, but because we have already been accepted by God through Christ and transformed to live like Him.

This list of barriers is not exhaustive.  Christians and Muslims have been debating and arguing for centuries, and there are many more barriers than those shared above.  However, these are three critical barriers that believers must be familiar with when dialoguing with a Muslim.  These barriers can be broken down over time and are not impossible to get around (although at times you may feel like you are ramming your head into a brick wall!).  Paul explains to the church at Corinth that the Gospel is a stumbling block to the Jews and to the Gentiles (Muslims), foolishness.  We cannot expect them to accept Christianity as truth the first time they talk to a Christian.  Remember that they are being asked to reject everything they have been taught since childhood.  This is not a decision made overnight.  This is a decision that they must wrestle with for months and years before they are ready to commit their lives to Christ.  In the meantime, we pray that the Lord would tear down these barriers and allow them to clearly see the truth of the Gospel.  In the next post I will share what I believe to be the three most effective bridges that one can use when trying to share the Gospel with a Muslim.