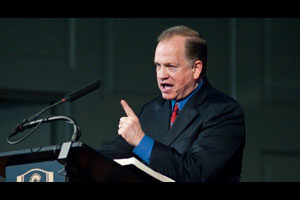 Here is a brief catalog of blogs discussing Danny Akin’s “Axioms for a Great Commission Resurgence.”

Below are some excerpts from these blogs, we recommend checking them out for the entirety of their story.

Also, at the bottom is a catalog of links to other blogs that have mentioned Dr. Akin’s “Axioms” that we are not providing excerpts from. If you know of any others that we have missed please let us know.

In addition, the Video, Audio, and Manuscript are available at baptist21 here.

WAKE FOREST (BSCNC Communications) – Jacob Green is as honest as he is unconventional. The new 27-year-old Senior Pastor of Bethesda Baptist Church in Durham, N.C., was visibly moved after a chapel sermon by the president of the seminary he attends – Southeastern Baptist Theological Seminary in Wake Forest. Green is young, single and now at the helm of a large Southern Baptist congregation located directly adjacent to the growing Research Triangle Park in the Raleigh/Durham area of North Carolina. Following Dr. Daniel Akin’s sermon, something changed in this thinking. “I am ready to put my money where his mouth is,” Green said after the address. “I would rather come and listen to Dr. Akin preach in chapel than go to the annual meeting of the Southern Baptist Convention,” he said. “Even as a young pastor I’ve learned and seen first-hand just how much red tape there is within the Baptist bureaucracy. I want that to change.”

On this day, however, Akin laid out an agenda that will surely be met by some with adulation and hearty agreement. Others, not so much. In the immediate aftermath of the address Cadon Fouts, a student at the College at Southeastern said, “What he said was God-centered and biblical; I don’t see how anybody could disagree. Daniel Griffon echoed the same sentiments, “He was gospel-centered, he was back to the Book, reaching the lost and not concerned with tradition.” Some students such as William Simmons evidenced a more personal application from the address. “When Dr. Akin spoke of repentance, I was convicted of my own laziness,” he said. “I wonder how many other sins we should all consider and personally and corporately repent.”

Akin stepped down from the platform and the SBC blogosphere ignited in rapid response. Traffic on the Southeastern Seminary blog – Between the Times – soared with hits from all over the world. If Akin wanted buzz about his remarks, his goal was achieved. The Facebook statuses of students, faculty and group pages all pointed to Akin’s axioms as a blueprint for the future. By early afternoon, the reality had crystallized among many – something of significance had taken place which would unfold in a long and arduous process. The Southern Baptist Convention is simply too big to accomplish all that Akin set forth without drastic changes taking place among the infrastructure that Southern Baptist churches support through the Cooperative Program. How this will be received among the churches and among other SBC entities remains to be seen…

Akin is aware of this fact and publicly addressed the overlap and the redundancy of a “bloated and bureaucratic” SBC. Stating that it was easier “to move some things through the federal government than the Southern Baptist Convention,” he called for a “simple convention” in the same manner that Thom Rainer has taught the concept of “simple church”…

WAKE FOREST, N.C. (BP)–The lordship of Christ and the centrality of the Gospel in Christian ministry must be the foundation of a Great Commission resurgence in the Southern Baptist Convention, Daniel Akin declared April 16 in a chapel message at Southeastern Baptist Theological Seminary in Wake Forest, N.C.

Akin, the seminary’s president, has been spearheading a movement for several months that he hopes will lead to a “Great Commission Resurgence” in the SBC to follow the “Conservative Resurgence” of the 1980s and 1990s. Akin has said the natural outcome of a return to the authority and inerrancy of Scripture in churches should be a renewed commitment to local and world evangelism that leads to partnership in ministry…

Akin concluded by noting that God is about to do a mighty work through Southern Baptists in the 21st century.

“We desperately need the heart of Jesus,” he said. “We need the eyes of Jesus. If we can get to that, we will have what we need to move forward as a mighty Great Commission army going forth to do battle for the captain of our salvation and the Savior of souls. If not, we will find ourselves on the sidelines playing silly and meaningless games while God’s mighty army moves on without us.

Danny Akin just picked up a big stone with the gospel carved in the center of it and threw it across the SBC.

When a rock hits a pond on a quiet day you look to see its effect. A smooth stone skimming across a glassy-smooth body of water twelve times in succession creates ripples spreading across the expanse, touching every inlet and outlet.

Perhaps you have heard or read Akin’s twelve-fold splash which started in North Carolina and apread across the globe. Like a rock skimming across a pond, in a clear, gospel-centered sequence, Akin has created a crescendo of visionary thought in the tradition known as Southern Baptists. He laid out Twelve “Axioms” for a Great Commission Resurgence on Thursday, April 16, in chapel at SEBTS. The echo from many resounds with as much clarity in agreement as there has be in sentiment concuring on the need for change before Akin spoke. We have tipped, and Akin laid out a vision for what that could mean…

What are some saying? Here is a spattering:

Ed Stetzer, who has spoken much about the need for a GCR: Akin nailed “some theses to the SBC door.”

I loved it all, but particularly appreciated when Akin said that all Southern Baptists, regardless of vocation or location, should see themselves as missionaries. The address is replete with quotes worth noting.

One of the loudest ovations in Binkley Chapel came from this statement: “Stop griping about organs, choirs, guitars, drums, coats and ties and be about the great commission.”

Another came from Akin’s call to add to Thom Rainer’s cry for a Simple Church to include “Simple Convention.”

In a much-anticipated message at Southeastern Baptist Theological Seminary, Dr. Danny Akin today unveiled 12 “Axioms for a Great Commission Resurgence.” Dr. Akin, more than anyone else, has been outspoken in his call for such a resurgence. His leadership in doing so has met with mixed response ranging from condescending, dismissive scoffing to enthusiastic support.

The axioms that Dr. Akin outlined help give definition to the GCR vision. Notice how gospel-centered it is:

If this vision begins to shape the mission of Southern Baptist churches then the future of the association known as the Southern Baptist Convention will be much healthier than many would ever have imagined. If such a vision does not win the day then I fear that the SBC, as a convention, will continue down the path of increasing irrelevance.

A Must-Read for Southern Baptists

Let’s be clear. I am a follower of Jesus. He is my Savior and Lord. I am also a Baptist…a Southern Baptist. My friend Dr. Danny Akin is President of Southeastern Baptist Theological Seminary in North Carolina. He recently spoke in chapel about our denomination. I encourage you to read the press release on his sermon. It outlines 12 axioms of a Great Commission Resurgence in the SBC.

In # 8 he calls on the denomination to deal with our structure that has become “bloated and bureaucratic”. He encourages us to rethink what we do in light of a great commission agenda that maximizes cooperation and minimizes bureaucracy in church planting and getting the Gospel to all people, everywhere.

If our denomination needs to look at this, I would suggest every local church needs a review as well. If the church needs it then every Christian home needs a review. I encourage you to read the article and pray for SBC President Johnny Hunt. Then review your life and actions to see if you are being missional at your home.

Dr. Danny Akin and the future of the SBC

As long as I have known him, Dr. Danny Akin (President of SEBTS in North Carolina) has never backed down from a good fight.  What’s more, he refuses to fight about things that don’t matter.  Today at SEBTS chapel, he laid down the gauntlet and unleashed a very compelling message on how the SBC should go about pursuing a “Great Commission Resurgence.”

Other Links on Akin’s ‘Axioms’

Proud to Be a Southern Baptist! By Bro. Matt

Axioms for a Great Commission Resurgence Happy in Grace

A strategy for the SBC The Desert Chronicle

Akin Manuscript: “Axioms for a Great Commission Resurgence” Between the Times

Missions Resurgence in the SBC!!! Mission and the Church