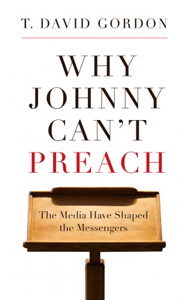 If you’re looking for a good book on preaching, you definitely want to check out T. David Gordon’s Why Johnny Can’t Preach.  I realize that most of you theology buffs are thinking, “The last thing I want to read is a preaching book,” but I assure you that you won’t be disappointed.  The literary quality alone is the worth the price of the book ($9.99 at Amazon), and you can read it in one sitting.

Playing off the titles of Why Johnny Can’t Read (Rudolf Flesch, 1966) and Why Johnny Can’t Write (Linden and Whimbey, 1990), T. David Gordon argues, “that societal changes that led to the concerns expressed in the 1960’s to 1980’s in educational circles…have led to the natural cultural consequence that people cannot preach expositorily” (15).

Additionally, in light of the subtitle, The Media Have Shaped the Message, Gordon suggests “exposition of a text, whether sacred or secular, requires the development of certain human sensibilities which, if not developed, render the individual as incapable of preaching as if he had no larynx,” (16).  And, for clarification, he follows the previous sentence with, “But first, let me attempt to establish my thesis: that many ordained people simply can’t preach.”

Why Johnny Can’t Preach is made up of five short chapters:

The chapter headings are a clear enough outline of the content.  Gordon’s book provides both funny and profound insights into the state of preaching today, and offers strong suggestions to improve preaching today.  Allow me to end with a few quotes from the book.

Concerning ‘The Contemporary and Emergent Churches’—p. 33

My challenge to the contemporaneists and emergents is this: Show me a church where the preaching is good, and yet the church is still moribund….The moribund churches I’ve seen have been malpreached to death.  But the fact that large segments of the church are abandoning anything like traditional preaching altogether establishes my point: that Johnny can’t preach.  He preaches so poorly that even believers have come to disbelieve that God has chosen through the folly of preaching to save those who believe (1Cor. 1:21).

Those who write compose their thoughts more successfully than those who do not; they commit few of what I inelegantly call “sentence farts,” in which one begins a sentence, partway through realizes that it cannot be successfully completed, and therefore begins again.

But it is never appropriate, in my estimation, for one word of moral counsel ever to proceed from a Christian pulpit that is not clearly, in its context, redemptive.  That is, even when the faithful exposition of particular texts requires some explanation of aspects of our behavior, it is always to be done in a manner that the hearer perceives such commended behavior to be itself a matter of being rescued from the power of sin through the grace of Christ.

[How-to preaching] is worse than Pelagianism because it doesn’t even accept the burden of attempting to prove that the will is morally unencumbered by original sin; it assumes this heresy from the outset.