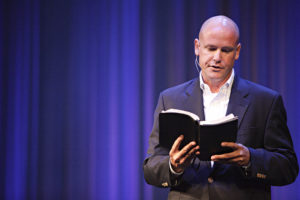 Baptist21 wants to make you aware of an important piece written recently by Jimmy Scroggins (Pastor of FBC West Palm Beach, Fl). In this piece Scroggins asks some very pointed questions about the Cooperative Program (CP) and its future. It should be stated up front that Scroggins is a Southern Baptist both in terms of raising and conviction. He has been trained in an SBC seminary, served as Dean of an SBC Bible college, has served in pastoral roles in SBC churches, and served in denominational positions. He has contributed to and benefited from the CP. He states his love for the SBC and excitement over many great things happening. So, why does he question the CP?

Scroggins main concern is, as a pastor, he must wisely steward the money that his people sacrificially give by deciding the most strategic way to use those resources for the advancement of the Great Commission. Every dollar his church spends in one place it cannot spend in another. It is in this context that he raises concerns about the CP.

He argues that the CP makes churches cooperate in too many things and that very little of what is given to “missions” through the CP actually ends up in the hands of missionaries. This has lead to a decline in CP giving by SBC churches in favor of other missions opportunities that are seen as more strategic.

Scroggins is not calling for the death of the CP or for societal giving, but he is calling for the CP to adapt with the changing times. The logic of the CP was easily recognized in a day of less communication, but now you can learn about mission opportunities and give directly to them with a click of a button. Scroggins urges the CP to change with the times and to compete for missions money by proving it is more strategic than other opportunities. He believes if this happens churches will give more and the CP will thrive and so do we!

In regard to the last question, many pastors/churches are specifically stating that they are giving less because they believe too much money is being kept locally in the states and not getting around the globe to massive Unreached People Groups. So, they think the solution is a strategy change, re-allocate the funds. Others are saying that it is a heart problem. People just aren’t giving like they used to. Give more, they say, and more will get to unreached fields. But, the question needs to be asked, “Why should someone give more to a system that they don’t feel is strategic?”

Baptist21 wants to state that it loves the CP. We believe it is an amazing idea and a gracious gift from God. We want to see it not only survive, we want to see it excel in the future not for its sake but for the sake of millions in darkness. But we do think some very important questions will need to be answered soon. We encourage you to read Scroggins’ article because we believe it is a plea from someone who loves the CP and the SBC. Will we adapt with the changing times?