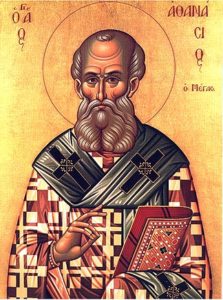 From,  On The Incarnation

“The marvellous truth is, that being the Word, so far from being Himself contained by anything, He actually contained all things Himself.  In creation He is present everywhere, yet is distinct in being from it; ordering, directing, giving life to all, containing all, yet is He Himself the Uncontained, existing solely in His Father.”  3.17

“But now that the Saviour has raised His body, death is no longer terrible, but all those who believe in Christ tread it underfoot as nothing, and prefer to die rather than to deny their faith in Christ, knowing full well that when they die they do not perish, but live indeed, and become incorruptible through the ressurection.”  5.27