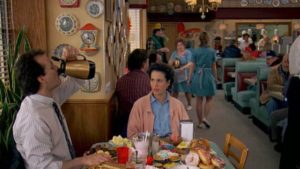 In the movie “Groundhog Day” Bill Murray plays the main character, weatherman Phil Connors, who is cursed to relive February 2nd – Groundhog Day – over and over again (some speculate as long as three decades) in Punxsutawney, Pennsylvania–the podunk town where the main Groundhog festival takes place. What does Phil do to cope with this monotonous prison? What does he do in an attempt to find meaning when it seems like nothing he does really matters from one day to the next?

Phil turns to hedonistic pleasures and denies himself nothing. If it feels good, he does it! There’s one scene in the diner where he gorges himself on a table full of food, drinking coffee straight from the pot and smoking a cigarette. He later punches out a guy who really annoys him. He even seduces women into bed with him. Then, Phil tries greed. He robs an armored car and uses the money to buy the car and the clothes he has always wanted. Faced with the reality that he cannot escape from this curse, Phil takes his life multiple times, but he wakes up everyday right back in Punxsutawney. No amount of pleasure, money, experiences, or knowledge can free him from this prison.

In Ecclesiastes, we find a guy who tried to find meaning in all of those things and more, and in the end he concludes that everything is meaningless. The “Teacher” or “Preacher” gives the main point of the book when it states that everything in human existence is “hevel of hevels” (the Hebrew superlative form to say life is a meaningless as it could possibly be). People exhaust their whole lives trying to find satisfaction in created things rather than the Creator. Pleasure, money, stuff, sex or success look like they can bring us true happiness, but it is a mirage–they are ever enough, they do not last, and they cannot bring ultimate satisfaction.

Ecclesiastes drives home the point that life in this fallen world East of Eden is futile and meaningless. A parallel from Paul in the New Testament helps us see this backdrop. Romans 8:20 seems to be an allusion to Ecclesiastes as Paul uses the same word (mataiotes) that the Septuagint uses in Ecclesiastes 1:2 when he talks about the curse God imposed on Creation because of human sin. Romans 8:20-21 says, “For the creation was subjected to futility—not willingly, but because of Him who subjected it—in the hope that the creation itself will also be set free from the bondage of corruption into the glorious freedom of God’s children” (emphasis mine).

When man rebelled against God’s design, a frustrating curse was brought into the world. Now nothing works right, and we live in a broken world where we suffer the consequences of going our own way. We abuse God’s good gifts, so that now food becomes gluttony, drink become drunkenness, and sex becomes adultery. We reject our God-given roles in marriage. Labor to provide for our families is now frustrating and difficult. And, ultimately we will return to the dust from which we were created (cf. Gen 3:8-19). Therefore, according to Paul, the fallen creation is futile and in bondage screaming along with the creature for rescue.

Ecclesiastes and the Gospel

The Ultimate Author of Ecclesiastes – the Spirit of God – uses the words of the book to convict the human heart of its need for Jesus. You see, Solomon and all of his sons had a problem – they failed and broke the commandments. And we have the same problem because we have broken God’s commands and sought satisfaction in things and people other than God. Ecclesiastes says even the hidden things will be brought to light. We will face judgment and the bad news is that we have fallen short. This reality is meant to crush us in order to drive us to Christ. That is the Good News: Jesus lived the life we could not live, a life without sin in perfect obedience to the commandments, and he died the death we deserved to die. He took the entire curse of sin and futility and death on himself in order to redeem us from the curse (Gal 3:13).

And the reign of death is strong, and it claimed Adam, and Abel, and David, and Solomon, and Rehoboam, and one day, it will claim you. As Jerome said, “What’s more vain than this vanity: that the earth, which was made for humans stays – but humans themselves, the lords of the earth suddenly dissolve into the dust.”[1] This is absurd – humanity dies and a new generation comes, but the earth stays the same. But, in a world full of grave plots there is one grave that is empty and there is one man whom the dust cannot claim because God would not allow the Holy One to see decay. Jesus is free from the curse, and He graciously offers that freedom to you. Cry out to Him in confession this morning that you have tried to find meaning in something or someone other than Him, and then find your meaning in Him alone! As Augustine declared, “Thou hast made us for Thyself, and our hearts are restless until they rest in Thee.”

Our Own Groundhog Day

There is a really interesting scene in the movie, early on in Phil’s experience. He sits at a bar in a bowling alley with two local guys that are drunk, and he asks them this question, “What would you do if you were stuck in one place, and everyday was the same, and nothing you did really mattered?” One of the men stares into his beer mug and says, “Yep, that about sums it up for me.” As Matt Chandler said, “Life is more like Groundhog Day than we want to admit.” [2] He goes on to point out that every day we do the same routine: Your alarm will go off at 6AM, you will hit the snooze to sleep ten more minutes, and then you will stumble into the bathroom to brush your teeth and shower. You will get dressed, jump in your car, sit in traffic, plod through work, take a break to eat lunch, punch out. When you get home you’ll eat dinner, sit on the couch and watch TV or read, and then you will hop in bed. Guess what you will do Tuesday?!

In “Groundhog Day” Phil does not wake up on February 3rd until he finally reaches a place of contentment in his current circumstance. Only then is the curse lifted. That’s kind of the point of the book of Ecclesiastes. We are stuck in a monotonous prison where nothing we do really changes anything, and the only way to live a meaningful life in this meaningless existence is to find satisfaction and contentment in what God has given us.

Satisfied in Him alone you can now rightly enjoy the gifts He gives you as a means to worship Him. You do not need a million dollars. You just need Jesus, and He gives you daily bread. You do not need to pursue a thousand pleasurable experiences because in Jesus at God’s right hand are eternal pleasures (cf. Psa 16:11). Now, the seemingly mundane things of life like scrubbing a dish, working a 9-5 job, and changing a diaper are shot through with meaning because Jesus says those who are faithful over the small things are given responsibility over greater things in my kingdom (Matt 25:14-30). By repenting from our vanity and turning in faith to Him, He redeems us and gives us a new and meaningful life. In Jesus there is something “new under the sun” – those who are made new creations in Christ (2 Cor 5:17).

-Jon Akin is the Senior Pastor at Fairview Church in Lebanon, TN