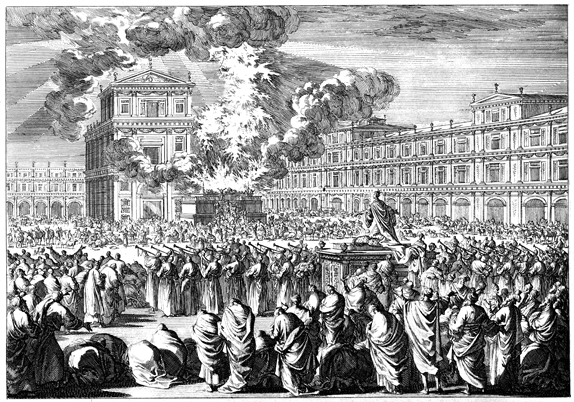 In 2 Chronicles the chronicler keys in on the history of the temple of God. Though King David “had it in his heart” to build the temple, God left the job to his son, Solomon (1 Chron 22:6-10). 1 Chronicles ends with Solomon anointed as king, and as soon as 2 Chronicles opens, Solomon is making preparations to build the temple of God. Solomon’s temple was to be, like the Tabernacle, the place where God lived with his people. The Temple was to be the place where God’s people could draw near to worship him. But the temple was ultimately a type leading to the climactic meeting place of God and man—the incarnation of the God-man Jesus Christ.

Solomon began to build the temple in Jerusalem on Mount Moriah (2 Chron. 3:1). This spot had great significance for the people of Israel. God had commanded Abraham to take his son Isaac to Mount Moriah and sacrifice him there (Gen 22:2). Abraham trusted and obeyed God – believing that God would raise Isaac from the dead (Heb. 11:19). However, God provided a substitute for Isaac, Abraham’s only begotten son. Instead of Isaac, Abraham sacrificed the ram that was caught in the thorns (Gen. 22:13). This spot is where Solomon built the temple, and it was in the temple that animals were offered up as sacrifices in the place of the people to bring forgiveness for their sins. God’s judgment was poured out on the substitute instead of the sinner. Years later, God would offer up the ultimate sacrifice – his only begotten son whom he loved. Jesus is the Lamb of God who takes away the world’s sins (John 1:29). Jesus is the sacrifice – crowned with thorns – who took our place on the cross. The story of Isaac and the location of the temple point forward to the offering of God’s only begotten son who offers eternal life (John 3:16).

The Presence of God

Once the temple was finished, Solomon had the Ark of the Covenant brought to it (2 Chron 5). The ark was placed in the Holy of Holies. The ark symbolized the presence of God, and therefore its position in the Most Holy Place represented the fact that God lived among his people. The ark was only temporary though, because God’s intention from the beginning was to eventually live among his people as one of them. That is why God took on human flesh in the birth of Jesus Christ and “made his dwelling among us” (John 1:14). In fact, the all of history is leading up to the moment when God makes his dwelling permanently with his people in the new heavens and new earth. Revelation 21:3-4 says of that day, “3 And I heard a loud voice from the throne saying, ‘Look! God’s dwelling place is now among the people, and he will dwell with them. They will be his people, and God himself will be with them and be their God. 4 He will wipe every tear from their eyes. There will be no more death or mourning or crying or pain, for the old order of things has passed away.’”

The New Testament reveals something far greater to us. The temple built by Solomon would eventually be fully destroyed during the exile (2 Chron 36:17-19), and the rebuilt temple after the exile was like nothing compared to the old one Ezra 3:12-13). The prophets prophesied that a greater temple would be built by a king (cf. Zech. 6:12-15). Yes, kings – like Solomon – are the ones who build temples. But, King Jesus built a different kind of temple. He said that the true Temple was his body (John 2:21), and the rebuilding of the temple is his resurrection from the dead, “Jesus answered them, ‘Destroy this temple, and I will raise it again in three days’” (John 2:19). With the coming of that temple, worship is no longer relegated to one place (John 4:21-23). You can come near to God anywhere you are. Jesus is the true temple because he is God in human flesh, living among his people (John 1:14). We can draw near to God through him because he has torn down the curtain in the old temple that separated us from God by means of his death on the cross (Matt. 27:51).

In the New Testament, The new temple is Christ’s body, which has been raised from the dead, and we are the body of Christ as the church – the new temple (cf. Eph. 2:19-21). The Spirit of God which fell on the tabernacle, and which fell on Solomon’s temple, and which descended on Jesus like a dove, has now fallen on the church of God (cf. Acts 2). It is not money given to a brick structure that builds the new temple, it is the spiritually gifted people of the church who build it up in Christ Jesus (cf. Eph. 4:9-16). King Jesus builds a temple made of living stones (1 Peter 2:5). And, on the last day, the true temple will be the lamb and the Lord (Rev. 21:22). Then, God will forever live among his people with no barriers separating us!