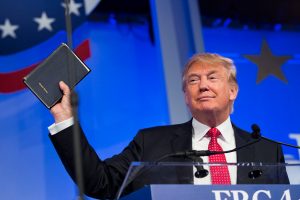 Usually it is clear which candidate the majority of Baptists will support. But that is not the case in 2016. Baptists are divided when it comes to supporting the GOP’s presumptive nominee – Donald Trump. Mr. Trump is a polarizing figure for many reasons that have been well documented. The question we want to raise here is, “Should Baptists vote for Trump?” Those of us in Baptist21 have been raised to believe that political engagement is important, and we want to think through these issues biblically. So, to help us think through rightly and biblically answering this question, we want to provide the three main viewpoints that Baptist leaders are taking on this topic.

If you missed Part One where we feature Dr. Robert Jeffress’ position that he is the “most electable candidate, you can find it here.

Be sure to sign up for the Baptist21 panel Tuesday over lunch at the 2016 SBC in St. Louis where our panelists will discuss these and other pressing issues.

Approach 2: Baptists should vote for Trump because he is “the lesser of two evils.”

This second approach still says vote for Trump but it is less enthusiastic about it. Two Baptists who seem to be putting this view forth are Richard Land and Todd Starnes (see Starnes’ article “Should Christians Vote For Donald Trump?”)

The lynchpins of this argument are:

Starnes mentions the quote from Spurgeon, “Of two evils choose none,” but rejects this logic because he thinks that it throws in the towel and elects Clinton. He compares Trump to store-bought chicken at Wednesday night church supper. “It may be culinary heresy – but folks will still eat it.” Starnes argues – rebutting Spurgeon’s logic – that to not vote for Trump is to essentially vote for and elect Hillary Clinton.

Richard Land, former President of the SBC’s ERLC and current President of Southern Evangelical Seminary, acknowledges that each Christian should make their own decision, but said he plans to “vote against Hillary Clinton and I don’t believe in third party candidates.” While Land is “deeply perturbed” at the choices and “will cast my vote with no joy,” it seems from his statements that he will vote for Trump simply because he is not Hillary and thus the lesser of the two evils.

The bottom line of the first two approaches is that while Trump may not be the most desirable candidate he has at least espoused pro-life views and has indicated he would nominate conservative justices to the Supreme Court and thus deserves the Christian vote.

What do you think of this approach?