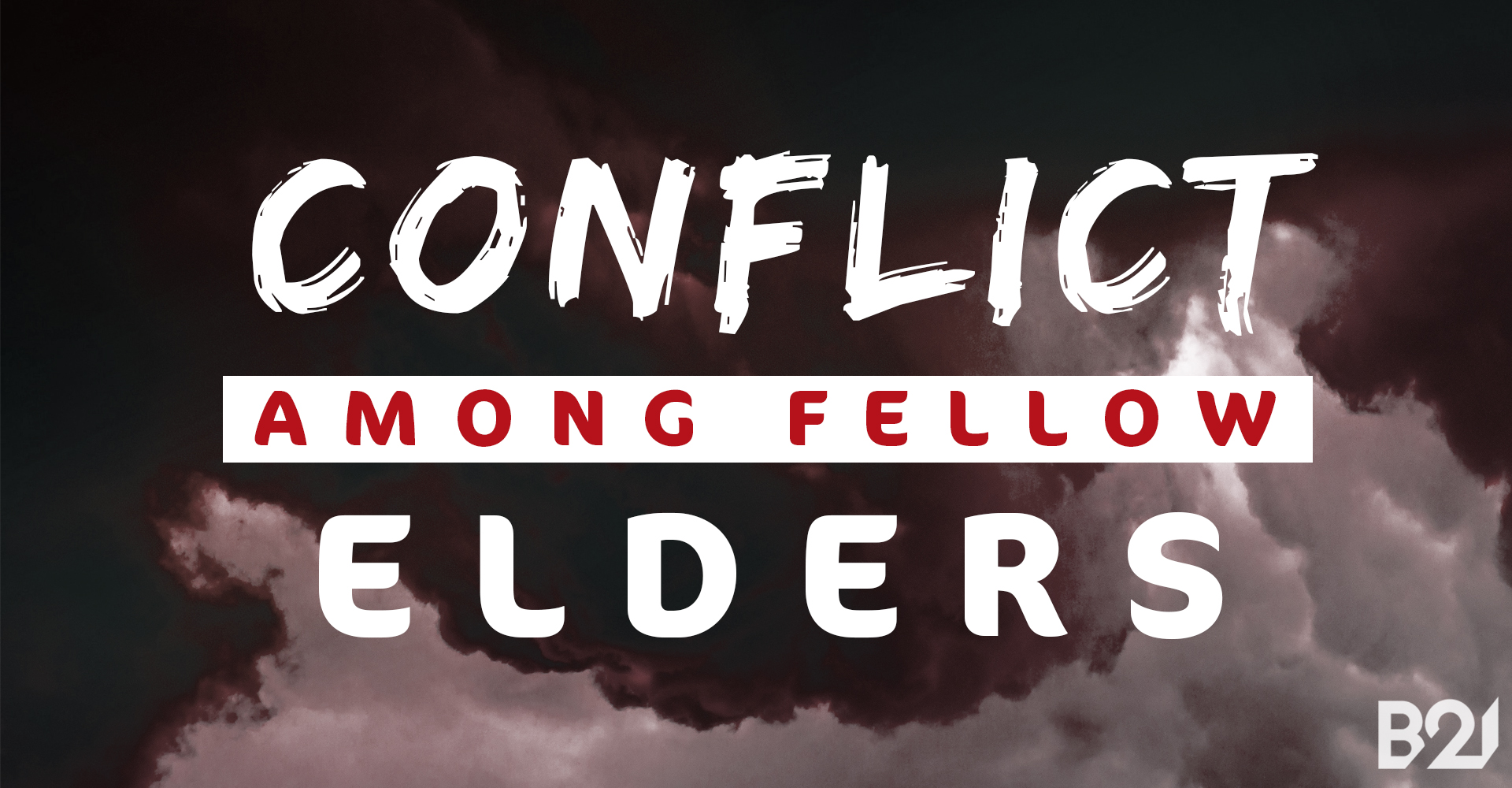 For the nearly twenty years I’ve been in vocational ministry, I’ve always served in a setting that understood the need for a plurality of elders. Prior to this, I served as a lay elder for a number of years as well. I’m grateful for the foundation of a Biblical ecclesiology that others laid as a legacy upon which I’ve had the pleasure to build. But it hasn’t been without conflict.

If we are going to respond to conflict among elders in a God-glorifying and church-sanctifying way, then we must recognize that any expectations that we will minister alongside one another for years with no conflict is both unrealistic and naïve. Conflict is inevitable. Jesus said “For where two or three are gathered in my name, there am I among them.”, but it could also be said, “where two or three are gathered together in the church, there is great potential for conflict. When two sinners gather together for an extended time, eventually there is going to be disagreement, disappointment, misunderstanding, hurt feelings, resentment, and even unrighteous anger. This is true in marriage, and it is certainly true for an elder board. If the Apostle Paul and the Apostle Peter experienced conflict between them, how can we expect to be immune? Due to the fact that most elder boards are filled with passionate guys with strong convictions and that the matters to which they must give attention are both complex and heavy, we should be surprised that there isn’t more conflict.

When I first became a lay elder many years ago, I was naïve enough to think that the elder board would be immune to conflict. Surely, all these guys who love the Lord will not allow disagreements to become arguments and grounds for personal attack. It took me about two elder meetings to realize how naïve I had been, and that’s only because I didn’t understand what was going on in the first elder meeting.

We need to remember that the potential for conflict is always present. Knowing this shouldn’t cause us to fear, but it should lead us to be prayed up and prepared for it’s eventuality.

Conflict is not like fine wine; it doesn’t get better if left in a cellar for a long time. Instead, like an infected wound, it will only worsen with neglect. Regardless of whether we’re the offended, or the offender, or whether we just sense that conflict is present among others on the board, we aren’t doing anyone any favors by sweeping it under the rug and ignoring it. Regardless of the context, resolution of conflict requires someone to have the courage to uncover it so it can be seen. Once discovered, it can be dealt with.

I encourage guys to build enough margin into the board’s meetings to ask questions like; “How are we doing as a team?”, “Are we ok?”, and “Is there anything between us that we need to get on the table?”. This is part of why we need to pursue friendships among the elders of a local church. This team is responsible for leading, feeding, and caring for the flock, and our enemy would like nothing more than to introduce division. If your board meetings are too packed with other agenda items, consider taking a retreat or introducing another non-business elder meeting. For example, years ago our elder board decided to add another monthly gathering of elders for the sole purpose of connecting on a more personal level. Absolutely no church business is allowed at this additional elder meeting. Part of the reason was to allow more time for this sort of personal conflict resolution.

Nobody likes conflict (if you do, please don’t serve on your church’s elder board). Personally, I hate it, and would like to avoid it if at all possible. But since it’s inevitable, and since avoiding it will only cause it to fester and grow, we must courageously and graciously deal with it. But how?

Scripture gives us precedent for seeking to work through conflict in person. When Paul had a sharp disagreement with Peter about the need to circumcise Gentile believers, he tells us that he “opposed him to his face” (Gal. 2:11). When Paul and Barnabas had the same disagreement with the elders of their sending church in Jerusalem, they went to see them in person to air their concerns.

Not only is there Biblical precedent for meeting face to face to resolve conflict, but there are many practical reasons for this as well. Complaining, back-biting, and gossiping are not only sinful, but they provide absolutely no positive movement towards resolution. Instead, they only make the conflict grow in number (by adding more people to the issue), and intensity. Likewise, other indirect means of handling conflict are similarly ineffective. For example, except for very rare circumstances, conflict should never be engaged via e-mail, texts, or letters. These forms of communication are woefully inadequate to communicate our concerns with fellow brothers and sisters. And since we live in a social media world, it is my conviction that we should NEVER use social media as a means of airing the dirty laundry between fellow elders. It doesn’t matter how badly someone may have hurt me, social media is not where I need to turn to be consoled by “friends”.

I can tell you from personal experience (about which I won’t elaborate here), that when a fellow elder chooses to address conflict with another elder in any way other than direct, face to face interaction, the results can be catastrophic. People are hurt, churches are split, and the manifest glory of God among the lost is tarnished. Shepherds who don’t keep short accounts with one another and don’t courageously pursue resolution to the conflict among them are putting their flock at risk. But shepherds who love the Chief Shepherd enough to protect the display of His glory, will surrender their pride and lovingly and graciously sit down with one another and work through their disagreements.

Recognize it as an opportunity for Gospel redemption

When we give in to fear and fail to address conflict directly, we are short-circuiting a channel of grace to redeem injured relationships. We need to remember that we don’t worship a dead Messiah, but a risen King. About this truth, Paul said, “If the Spirit of him who raised Jesus from the dead dwells in you, he who raised Christ Jesus from the dead will also give life to your mortal bodies through his Spirit who dwells in you” (Rom 8:11). Friends, we are indwelt with the Spirit of this risen Christ, and we are short-selling the power of grace when we surrender to fear and don’t give room for the Spirit to work and redeem broken relationships on the board.

In over 20 years of serving on elder boards, I have many examples of God redeeming relationships from the grip of conflict. Regrettably, I also have many stories of how pride and fear prevented fellow brothers from experiencing God’s redeeming grace. Where grace was allowed to flow, brothers were restored and churches were blessed. Where grace was not allowed to flow, brothers remained enmeshed in battle and churches were damaged, sometimes irreparably so.

The unity of the elder board, the protection of the Bride of Christ, and defending the honor of our Lord are all worth overcoming our fears and doing the hard work of having hard conversations and walking patiently yet intentionally through the rough waters of resolving conflict.

Ken has been a pastor for 17 years and started NewBranch Community Church back in 2008 along with 12 other families. He has been married to Susan for 27 years and together they have four sons (two grown, and two in high school). Ken did his undergraduate work at Georgia Tech, his graduate work at New Orleans Baptist Theological Seminary, and enjoys reading, golf, and going to the movies with Susan. His primary role as Lead Pastor is preaching and staff leadership. Ken also serves on the board of the Pillar Network.