This is a guest post by Brian J. Wright (PhD, Ridley College). Brian serves as adjunct professor at New Orleans Baptist Theological Seminary. He and his wife, Daniella, have been blessed with four children. He is an active member of Hillcrest Baptist Church, Pensacola, FL.

Welcome to biblical scholarship: set your watch back 30 years—or at least 29.

In 1989, William V. Harris wrote a book on ancient literacy that changed the face of biblical studies. In a sentence, he argued for mass illiteracy in antiquity.

What does this have to do with you, pastors and people in the pews today?

Bart Ehrman has a new book out this month, The Triumph of Christianity: How a Forbidden Religion Swept the World. According to the publisher’s synopsis, it is based off the assumption that the first believers were illiterate and remote. Following his book is Illiterate Apostles: Uneducated Early Christians and the Literates Who Loved Them, in a well-known academic series, edited by an author who has argued that Jesus was illiterate.

Perhaps none of this is surprising or earth shaking to you. In fact, two pre-publication reviews of Ehrman’s new book have already noted that it is “not groundbreaking” (Kirkus) and “doesn’t provide new research” (Publisher’s Weekly).

But that’s not why I’m telling you this. Indeed, these books and authors are not our primary concern. They are, however, the latest examples of how certain presuppositions and preunderstandings of ancient book culture and literacy dominate biblical scholarship and leave open the door for such works.

Believe it or not, there are more topics and arguments in biblical studies judged by an ancient literacy yardstick then meets the eye.

Let me give you just four specific examples within biblical scholarship to illustrate my point:

Did you notice? Authorship, interpretation, authority, and the reliability of the Scriptures are no small matters to believers.

If, however, the scholarly consensus is wrong about ancient literacy and the impact book culture had on early Christianity, then these types of arguments will need to be abandoned or amended. Yet, a reason why the majority of biblical scholars have not criticized certain assumptions regarding ancient book culture, such as mass illiteracy, is largely because they embrace the same ones.

What Are Some Faulty Assumptions?

Here are just three faulty assumptions that have plagued much of biblical scholarship since 1989, followed by a short response in light of my recent work:

1) The assumption that there is little evidence in the first few centuries.

D.A. Carson said of my new book on ancient book culture, “One wonders why these things have not been brought to light before.” I think he is exactly right to note this because, although the evidence has been around a long time, our knowledge (or incorporation) of it has not.

In fact, at each stage of my research, I had to keep narrowing the parameters. I started the project looking for all types of evidence from the first three centuries. Before long, I realized I would not even be able to cover one type of evidence (literary) in one of the centuries (the first century). Even after adding a highly selective appendix with 60 ancient authors and 142 ancient texts, on top of the ones already mentioned within the book, I was unable to include all the literary evidence I found, not to mention other types of evidence, such as epigraphic and archeological.

The assumption that there is little evidence is a myth.

2) The assumption that only a small segment of society in certain urban areas could have been involved in literary activities.

The ancients’ problem was that everyone everywhere seemed to be reading and writing. Our problem today is thinking hardly anyone was or could.

As I show in my book, there was a wide-ranging diversity of people involved in literary activities; broad distribution of literature; ease of travel; generous access to writing materials; minimal amount of proficiency required to accomplish reading and writing at acceptable levels; and the widespread practice of communal reading.

3) The assumption of mass illiteracy during the time of Jesus.

There was a reading craze during the time of Jesus, and literature was pervasive. In fact, so widespread was reading and writing that emperors exiled authors, burned books, and tried to suppress literature. Other evidence from recent excavations challenge the mass illiteracy view, such as graffiti, inscriptions, writing implements, board games, public games, news bulletins, etc.

That is not the picture scholars often paint, but the evidence does.

(For more details on some of this, see my 2015 publication on ancient literacy, as well as my 2016 article on ancient Rome’s news publication).

Where Does This Leave Us Today?

Last month, I had two separate conversations with specialists working in the field. I asked them their thoughts about the state of ancient literacy. The first one mentioned that Harris set the bar too high for how we should define ‘literacy’ in antiquity and that it is unhelpful to define it as elitist. Harris was probably thinking more of his early schooldays (writing Latin, for example, without error) than that of antiquity.

The second one suggested that because Harris’ study was exhaustive, its failings have only been addressed in a piecemeal fashion over the years—often found in works not readily available or buried in the infamous footnote cellar of ones that are. Thus, until someone reexamines the evidence as a whole and in a single work, scholars will continue to err on the side of caution via the scholarly consensus.

Then again, even if you show scholars a mile, they usually only give you an inch (and that’s if you’re lucky). They seem to always find a way to preserve their previously published positions.

Sadly, many biblical scholars—and most pastors—tend to ‘canonize’ their formal education and continue writing and teaching without staying up-to-speed with new excavations, recent finds, and the latest research. Granted, no one can keep up with all the resources that are being published today. But an essential part of interpretation is to regularly identify and assess our core assumptions. This may be a good time and year to take steps to reevaluate our presuppositions related to ancient book culture.

Of course, I remember a fellow pastor kidding around with me early on in my PhD studies after I told him about my topic in ancient book culture and a recent book I read claiming that Jesus was illiterate. He said, “So you researched and wrote about the deity of Christ for your Master’s degree, and now for your PhD you’re wondering if Jesus could even read. Interesting.” 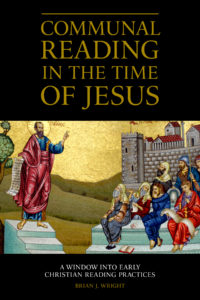 *For some pastoral reflections and implications of Dr. Wright’s recent book, please see his recent article with The Gospel Coalition and forthcoming interview with Christianity Today. You can purchase Dr. Wright’s book here.