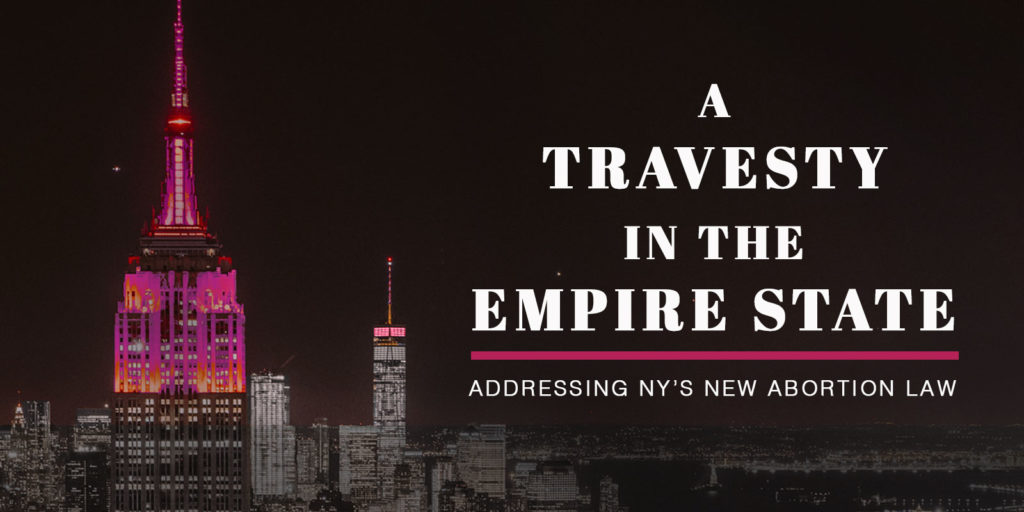 We were sitting on cushions pushed up against the wall in the front room of her house built into the mountainside in Veles, Macedonia. We had brought her dad, a Roma man who lives in the community where we were ministering, to visit her. She took a slow sip from her coffee as she watched my two oldest children, then toddlers, play on the floor.

“I have two children, but I was pregnant many more times.”

I looked at her confused, wondering if I had misunderstood her.

She repeated herself in Macedonian. She had no emotion in her voice; she was just stating the facts. “Every time I got pregnant after my first two, I had an abortion. I didn’t want any more.” She shrugged at me before taking another sip of her coffee.

It was the first time I had heard someone speak of abortion with such nonchalance. My stomach churned, and I couldn’t breathe. That feeling returned this past week.

Two weeks ago, I left the Evangelicals for Life conference encouraged by the pro-life work being done by brothers and sisters in Christ. Not even a week later, New York Governor Andrew Cuomo signed the Reproductive Health Act. The act permits “abortion until birth for the mother’s ‘health,’ which is not defined and has been interpreted by the Supreme Court to include, in essence, any reason. The measure also enables non-physicians — midwives, nurse practitioners and physician assistants — to perform non-surgical or chemical abortions. In addition, it protects abortion performers by moving abortion law from New York’s criminal code to its health code.” As the legislation was passed, the New York State Senate chamber erupted in applause.

As I watched the footage and read about the legislation, I shuddered with Isaiah:

“Woe to those who call evil good

who put darkness for light

and light for darkness,

who put bitter for sweet

and sweet for bitter!”

We should all be weeping for New York. We should be weeping for the people across our country who called it a victory, for the practitioners who spill human blood and end life, for the women and men who will deny their baby life, and for the vulnerable babies who are murdered.

We’re all affected by abortion. Recent statistics say that 1 in 4 women will have an abortion by the time they are 45. We have women in our neighborhoods and our churches who personally carry the grief of a baby’s life that was ended by an abortion. We all have potential neighbors, friends or loved ones whom we will not get to know because of abortion. We have lost the opportunity for relationships and interactions because of the millions of people whose lives ended before birth. Abortion affects us all whether we want to believe it or not.

And if you don’t live in New York, the legislation serves us a somber warning. Even if Roe Vs. Wade is repealed, most of our states have laws that will still allow abortion.

The message that abortion is murder is considered hate speech by many. They believe that we are denying women the right to choose what to do with their body and how to live their lives. They claim that the baby in their womb is not yet human. We cannot shy away from speaking the truth against these lies.

Women who have abortions are often hurting. We don’t know what lies they believed or what sad situation they were in that led them to an abortion. But the same truth that has the power to save us all in our sin is the truth that anyone who has had an abortion or who supports abortion needs to hear. It’s the truth everyone needs to hear because we’re all sinners. There was blood shed for the sins of people who are spilling the blood of innocent babies in the womb. The blood of Jesus is great enough for us all.

A few years before I sat in Veles, I sat in another friend’s living room as she cried when she told me about her abortion. When she first heard the gospel she wondered if even her abortion would be forgiven. We wept with sadness over her baby, and we wept with gratefulness that the gospel is big enough to save us all.

May we cry out to God to end abortion, and may we be bold enough to speak truth to our neighbors and our leaders. New York’s new legislation was passed based on lies that call abortion good. But the people who protect and champion abortion, and the women who have had abortions are image bearers just like you and me. They are sinners who shouldn’t be shunned but rather shown our Savior.

Jessica is a member of the 2019 ERLC Leadership Council and a free-lance writer who previously served as a missionary and teacher.  She currently spends her days as a homemaker and educator to her 4 children.  She is married to her high school sweetheart, BT Burke, who is involved in jail ministry and church planting in a multicultural context.  In her spare time, Jessica loves to read books, write, or to go for a jog around the neighborhood.