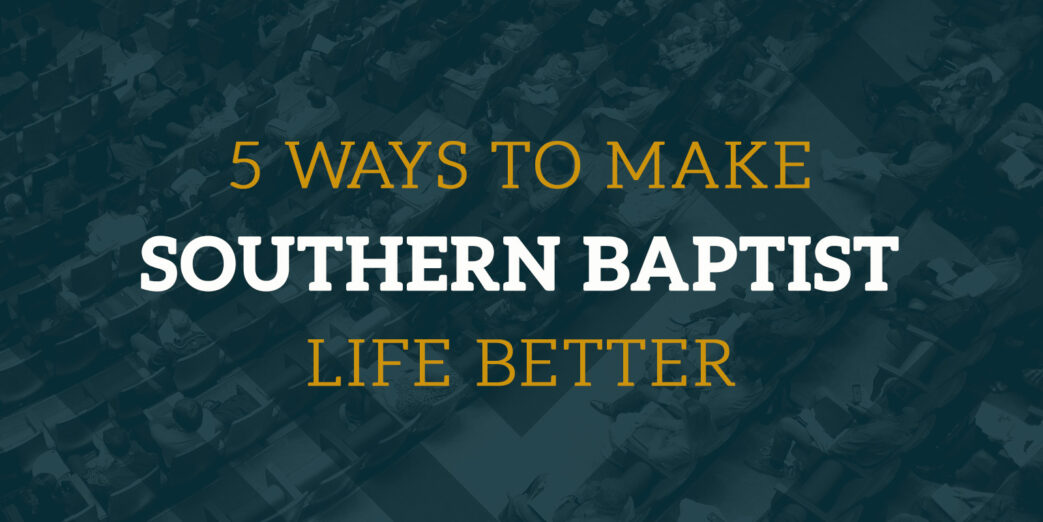 The SBC has problems. Lots of them. If you’ve been around the SBC very long, that’s not a surprising statement. What is unique about our current situation is the nature of the topics around which we disagree—race, politics, women in ministry, handling abuse—and the intensity with which we disagree. People don’t just disagree with each other; they demonize their opponents. Misrepresenting others seems standard for many. Painting people in the worst possible light appears to be a best practice for a few.

The pressure to divide is greater than ever, and the issues we’re discussing are more complex than most we have  faced before. The technology we use fosters misunderstandings and misinformation, and there is a lot of money and glory to be made by increasing the difficulties and widening the divisions.

These difficulties shouldn’t be surprising. The Bible warns us that there will be “difficult times” over and over (Matt. 10:22; 2 Tim. 3:1; 1 Pet. 5:8), and the world around us is fighting and dividing at a speed that most of us have never seen.

What should we do? While some will walk away, many will stay to try to make things better. We advance Christ’s Great Commission better together, even though it won’t be easy. Many who have benefited from Southern Baptists will see that these past benefits were investments made so that they’d lead––not leave––in moments like these.

For those who will stay and lead, here are five actions that every Southern Baptist can do to move things in a better direction.

Pray For ALL Great Commission Baptists  – I know, I know, you already know this one. The problem most Southern Baptists face isn’t an unawareness about the necessity of prayer; it’s a lack of actual prayer. How many difficulties need to come into our lives and our convention before we start making prayer a part of our daily lives? God can do more in a moment than we can do in a lifetime. Prayerfulness leads to powerful kingdom advances because God gets the glory when we get on our knees. Pride doesn’t pray. Pride thinks that it can solve its problems without asking God for help. If we want to move things in a better direction, we need ALL Southern Baptists praying for ALL Southern Baptists, especially for those you don’t appreciate.

Forgive Great Commission Baptists Who Frustrate And Fail You – Every meaningful relationship requires grace and forgiveness. Whether we’re talking about friendships or family life, lasting relationships are difficult and require forgiving grace. If it’s difficult to be in relationship with those we love the most in this world, how much more difficult will it be to cooperate lovingly with those who handle life and ministry a lot differently? With around 50,000 different types of churches in the SBC, you will be wronged if you are involved. And it will be easy for those wrongs to fester, fostering division and resentment in your heart. How many of us are aware of leaders in our convention who fail to forgive those who frustrate them? If you know enough of the Bible, it’s easy to find biblical sounding rationalizations for disobeying Jesus’ command to forgive others as he forgave you. If we want to move forward, we need to do a better job forgiving one another.

Confront Baptists In YOUR Great Commission Baptist Stream – Because we all fail at certain points, we all need to be confronted. Most of us find it easier to confront people outside of our circles than those within. While this may be appropriate, it isn’t usually effective. How many times have you changed your position or admitted that you were wrong when confronted by an adversary? It doesn’t happen often. Most people are more responsive to rebukes from within their own ranks. Southern Baptists always have and will always be made up of different groups with strengths and weaknesses. In a world that pursues uniformity and exclusion in the name of diversity and inclusion, let us be grateful for the different streams in Southern Baptist life. We should also understand that every group, every stream needs to make sure that they are confronting the wrongs in their corner of the SBC. Our health depends on it.

Listen To Great Commission Baptists Who You Think Are Wrong – Most ministry leaders understand that people in their ministries that cause problems often teach them the most. Even when a disgruntled person is wrong, God uses their problematic behavior to help you learn something. Perhaps the Apostle Paul learned through difficulty (2 Cor 12:10), and we can too. But if we want to learn, we need to listen. No, I’m not saying we need to listen and agree with whatever we are told. But I’ve found when I focus on listening, more than defending, I usually learn something—even if it’s not what they’re trying to communicate. How many times have ministry leaders figured out that they were overlooking something important because a challenging person made them slow down enough to consider their ways and their words? A lot. We would be better off if we started to listen more carefully to one another, even as we pursue what we are already convinced is best.

Unite With Great Commission Baptists  Unlike You – The world around us says you can’t love and respect people who disagree with you. And we all know, if you don’t feel loved and respected by someone, you won’t be united with them. Jesus calls us to unite in the gospel (John 17:23; 1 Cor. 13:1-7), treating people with whom we disagree with love and respect. To do so, we have to be in relationship with people with whom we disagree. Where are the statesmen and women who know how to love and respect Southern Baptists from various traditions and lead others to do the same? The advancement of the Great Commission increases or decreases to the degree we obey the Great Commandment. If we want to see things get better, let’s start making it a habit to reach out to the “other side” with love and respect.

If we do these things today, we’ll have a better future tomorrow. As we do our best with God’s help, let’s continue to endure. Let’s endure for the sake of the 3 billion lost people around the globe headed to hell. Only the SBC has over 3,000 missionaries trying to get the gospel to them. Let’s follow in Andrew Fuller’s steps and “hold the rope” for the over 3,000 William Careys amongst the nations. Let’s endure because the lost in North America will be reached more effectively with an organization training and supporting church planters and missionaries to reach their area with New Testament word and deed ministries. Finally, let’s move forward with Southern Baptists because our churches and ministries will need more leaders, not less, in the coming days—and no other place is training and equipping more leaders than the Southern Baptist seminaries.

I believe our best days are ahead of us because God is still advancing his perfect purposes through imperfect people. Let’s be good stewards of this moment and our ministries, seeking to follow Jesus through every conversation, moment, and challenge.