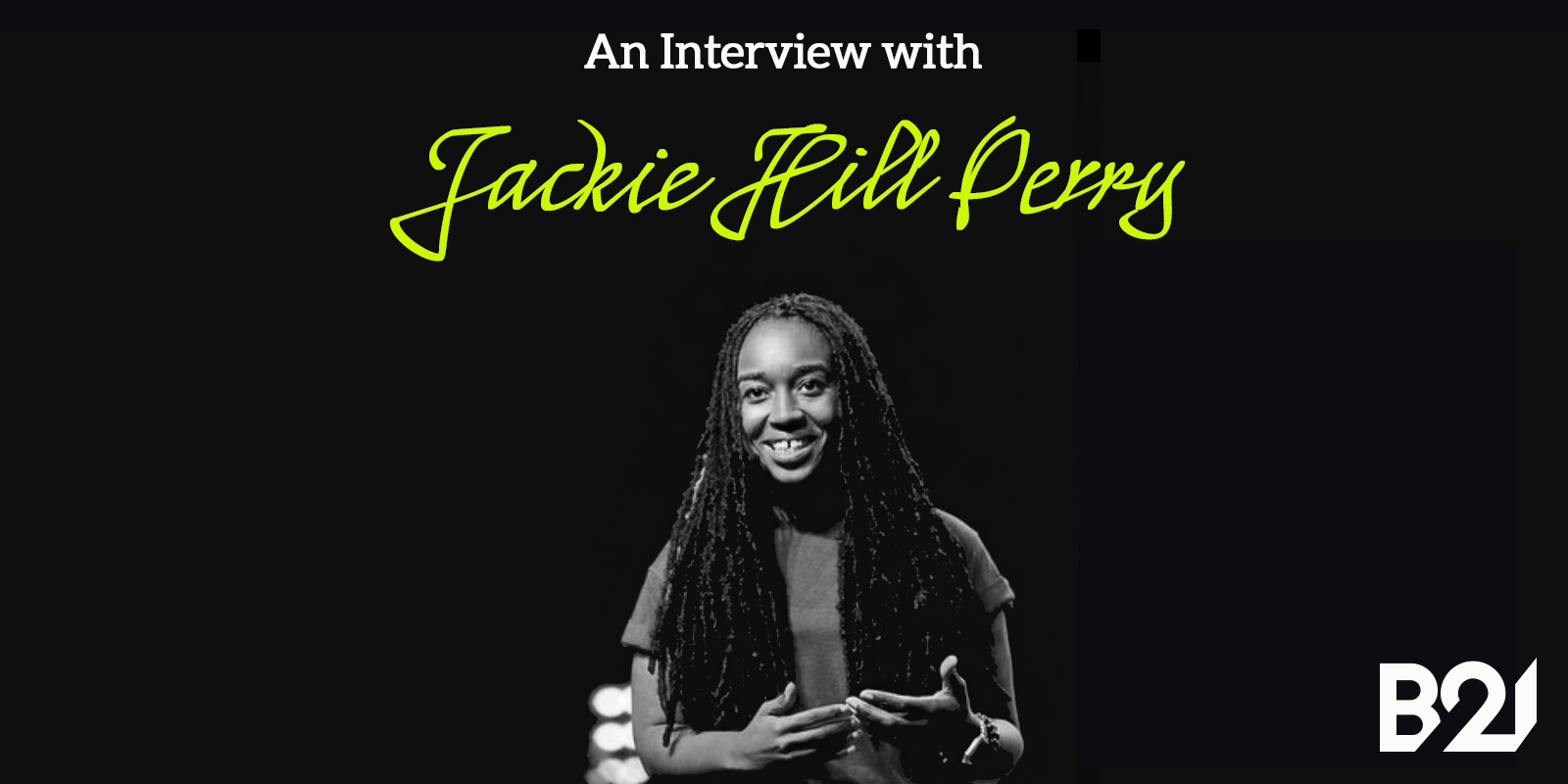 Jackie Hill Perry has a story to tell. In high school, she had her first girlfriend. Two years later, she was living openly as the stud in a steady lesbian relationship. Her book, Gay Girl, Good God, tells about that part of her life and how God called her to Him. Over ten years later, she’s married to her husband Preston and the mother of two little girls.

But the story she wants to tell isn’t really about a journey from homosexuality to heterosexuality, though that is part of it. Her story is about God revealing Himself to her and saving and sanctifying her.

In her book, Perry challenges politically correct beliefs about gender and sexuality. But Perry isn’t just tearing down popular cultural beliefs. She also challenges Christian culture that teaches that same-sex attracted men and women who come to Jesus will “be straight or that coming to Jesus ensures that they will be sexually attracted to the opposite sex” (177-178).

Perry – also a poet, spoken-word performer, and hip-hop artist – uses words to create art. Weaving the threads of her personal story with the story of the gospel, Gay Girl, Good God offers readers a reminder that the gospel alone saves:

Christ did not die to redeem us in part. Neither did He rise so that we might have life in portions. But with us having a body made for Him, as well as the mind, will, personality, and emotions that it contains, we must understand that God is after us becoming victorious over any and all sin that would hinder the whole person from serving God fully and freely (101).

Some would have us to believe that it is possible to graduate from Christ’s gospel. To treat it as if it was no different than Similac or high chairs, or learning how to tie our shoes only so you can move on to doing better things with your feet. But reality would have it that a departure from dependence on the gospel would be a departure from dependence on Christ Himself (103-104).

I had the opportunity to talk with Perry about the role of discipleship in her Christian walk and the church’s ministry to the LGBTQ community. (This interview has been minimally edited for conciseness.)

I lived with Santoria from about the age of 20 to 21. I didn’t have a job, so discipleship was constant. Every morning she’d have an assignment for me so whether that was working through a Bible study workbook – she had me do Seeking Him byNancy Leigh DeMoss Wolgemuth. She had me at one point read through the entire book of John and for each sentence I had to write down what I believed the sentence was trying to say about Jesus, so it took around 6 or 7 months. As a twenty-year-old new Christian, I wondered why I was doing that. But now as a Bible teacher, I see how it trained me to see that all of scripture – every sentence, every word – really does have something for us to learn and know.

A lot of the discipleship isn’t just what she taught me; it was really just what she showed me. I really saw her life – that she loved Jesus, that she honored Jesus. I saw her fail, I saw her struggle, I saw her pray and confess.

When I moved to Chicago, my pastor Brian at Legacy Christian Fellowship taught me how to be a leader and not to let my personality rule how I love people. I’m an introvert, and it can feel more convenient to just be in a corner. Brian just would not allow me to do that.

Later, I was mentored by a woman who helped me in the process of courtship, marriage, and being a mother. I think all of my discipleship has been contingent on whatever season I find myself in.

Discipleship will always matter to me. I’m in a new church, and I’ve reached out to an older woman that I want to walk in the faith with me. I don’t need someone to teach me to study the Bible and pray like Santoria taught me, but I do need someone to affirm and confirm and call out the ways in which I can grow.

When you moved in with Santoria, did you know what you were getting yourself into?

When I met Santoria, she was over all women’s ministry within her church. When I moved into her home, I knew it wasn’t going to be a vacation. Discipleship was a culture of that church. I think to go to that church, you knew it meant that you were going to link up with someone to grow. I also knew I needed it. I had been at a church that was easy to exalt you if you were gifted, even if your character didn’t line up. Santoria was one of the first people to tell me that I was on my way to being popular but at the same time that my life wouldn’t be that fruitful because I wasn’t submitting to him holistically.

When you were a new Christian and came out of your lesbian lifestyle, what kind of challenges did you face that people might not understand?

I actually think there’s a lot that they could understand, especially in friendships. I had to distance myself from particular friendships because I knew it would be unwise to remain in them. “Blessed are those who don’t walk in the counsel of the wicked.” I didn’t know that verse, but I think by the Holy Spirit I was led to take heed to the verse. So changing friendship but also changing my clothes. I dressed very masculinely. I thought it would be wiser for me to dress more like who God had created me to be. That felt weird and uncomfortable. It felt strange to be in friendships with women and then finding myself attracted to them and then not be able to act out.

Are there things that churches are doing to minister to the LGBTQ community that encourage you?

One impressive thing is that people are asking a lot of questions, which show they feel inadequacy. That leads to humility because they aren’t saying that they already know what to do. They are reading Rosaria Butterfield’s book or my book or Sam Alberry’sbook. They are searching the scriptures and looking at 1 Corinthians 6:9-10 to see how we apply this to discipleship and church discipline. I think the fact that people are seeking to learn and grow in how they love the gay community and people in their churches that are same-sex attracted is super dope.

What are some ways the church is failing to minister well to the LGBTQ community?

It’s hard to generalize because what could be called failure is dependent upon region.

One thing that I think the church could continuously grow in is the understanding that the gay community is not that different from you. There is still this perception that they are “other.” Othering of people different from you is what leads to a distant love, an apathy, a kind of self-righteousness. Because their sin is different from yours, it can feel as if you are closer to God’s grace than they might be.

The pendulum is also swinging the other way. In the name of compassion, many are changing what they believe scripture is saying from what historians and theologians have said for centuries. There are both extremes – how do we love and be compassionate yet at the same time, how do we not lose our conviction? And so that’s where I talk about regions. You might have really secular regions like Boston or New York who struggle with the pendulum swinging to being liberal, and then you have conservatives in the south who might lean to feeling as if they are morally superior than others whose sins are more obvious.

I’m thankful for Perry’s testimony to God’s redeeming work in her life and commend to you her book as a reminder that we have been created for God’s glory and that His work on the cross is enough for all of us. May we humbly listen to her words and ask questions of, seek to learn from, and build with people who are different from us.

Jessica lives in North Carolina with her husband, BT and their four children. She currently serves on the 2019 ERLC Leadership Council and loves to write in her spare time. The Burkes lived overseas for three years as missionaries and are members of King’s Cross Church, a multiethnic plant in downtown Greensboro.