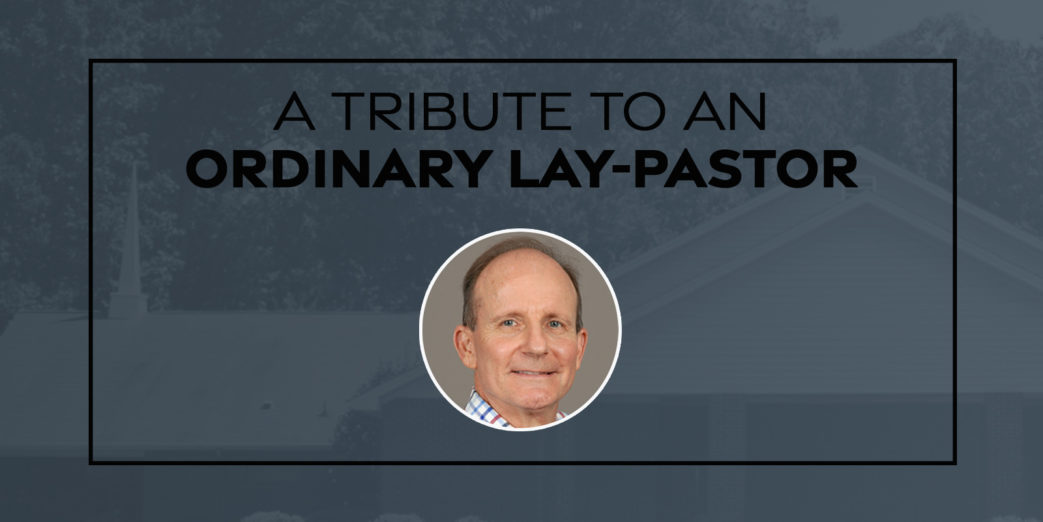 Last year, I read D.A. Carson’s excellent little tribute to his father titled, Memoirs of an Ordinary Pastor. I am writing this article in the spirit of that book. Thus I have given it the title, A Tribute to an Ordinary Lay-Pastor.

Bob Prentice (1957-2020) is a name few will recognize, yet I am confident that on the Last Day he will be honored by and above many. Bob Prentice was an ordinary lay-pastor at Grace Reformed Baptist Church in the small town of Mebane, NC. I’m privileged to say this was the church that trained me for pastoral ministry. Pastor Bob earned a living as a salesman, but he considered his main work to be shepherding the flock.

Pastor Bob died tragically and unexpectedly in the morning hours of the Lord’s Day, December 20, 2020. He had contracted COVID-19 about ten days prior which developed into pneumonia. He was only sixty-three years old and left behind a wife, two sons, and six grandchildren.

His untimely death has provoked some stirring personal reflections. Pastor Bob came into my life at a crucial point. I was fresh out of college and just beginning my course of study at Southeastern Seminary. I was young, overconfident, and raw. I had not yet comprehended the true nature of pastoral ministry. When I came to Mebane, Pastor Bob immediately befriended me, and through his faithful shepherding care taught me many lessons about what it really means to be a pastor. I learned the best lessons from Pastor Bob, not primarily through his direct teaching, but by his example.

There are three memories I have of Pastor Bob that I trust will never leave me, and they illustrate something of the prayerful humility and quiet faithfulness that characterized his life. I also think these three episodes are especially instructive to younger pastors like me. The Lord has brought them to my mind again and again in these early years of my ministry.

The first memory dates back to my very first sermon at Grace Reformed in 2014. I was to preach on a Sunday evening and was, as one might imagine, quite nervous. I decided to get to the church an hour early to make final preparations. I wanted to go somewhere in the building where I was sure I would not be found and interrupted. So I went to the furthest corner of the building, to the last Sunday school classroom down the long hall of the church’s education wing. I walked in the classroom and turned on the light, and there was Pastor Bob on his knees on the floor. He immediately jumped up, looking mildly embarrassed. I think I bumbled out something like, “Oh, um, I’m sorry…..um…..what were you doing?” He said with a slight blush, “Well, this is normally the time when I come to the church to pray for all the children and young people who have left the church over the years and are still outside of Christ.” “How long have you been doing this?” I said after a brief pause. He said “For years.” In all the years he occupied that space for prayer Sunday by Sunday, I’m sure no one else ever found him.

My second memory is also in connection with a message I was to preach. Our church was holding a special evening Christmas service that was geared toward evangelism. The service was to feature special music, a number of Scripture readings, and a short evangelistic sermon. We were expecting lots of visitors, some of whom we knew would be lost. For some strange reason, I was asked to preach the message. I was a seminary student at the time and not an elder or staff member. I was sure at least a dozen other men were better suited for the job. I felt like I was punching above my weight, and again, was quite nervous.

The service came, and the room was packed. I was to preach on John 3:16 and I remember the feeling as I tried to preach my heart out to that room that evening. As I preached, I observed there was hardly an empty seat in the room, and some folks needed to stand in the back. Though I don’t remember noticing any other faces that evening, I do remember seeing one very tall and slender figure standing at the back. It was Pastor Bob. What was striking, and frankly a little strange, was the manner in which he was sort of craning over the congregation. He wasn’t looking at me. He was scanning the audience. After two or three looks his way, I soon realized what he was doing. As I preached the gospel that night, he was looking to see who was in the congregation. He would identify someone, and then he would begin praying for him. And then he’d look up again, find someone else, and begin praying for her. I’m sure I’m the only person who saw and discerned what he was doing that night. To preach the gospel to sinners is already a thrilling experience. To do so with a beloved pastor standing at the back praying for the souls to whom you are preaching introduces a new level of exhilaration. That night I felt like Rocky Balboa with Mick in my corner.

The final memory is actually quite recent, and perhaps sweetest of all. My wife and I recently welcomed our third child. As I was lying on the hospital room couch with my newborn son on my lap, I received a Facebook message from Pastor Bob’s dear wife, Carol. She was messaging me on behalf of Pastor Bob who was very sick with pneumonia and had been unwell for a couple of weeks. Pastor Bob had heard that we had just welcomed our third baby, and he wanted to confirm the he had the correct name of our middle daughter (she has an unusual name) so that he could pray for her. This man was in bed with pneumonia, and he wanted to pray for our Camden. Pastor Bob died two days later.

A man on his knees in a dark and empty classroom. A man earnestly and prayerfully craning over a room full of lost souls. A man quietly lisping prayer for a friend’s one-year-old little girl as he lay sick in bed. These are the things of which true-hearted pastors are made. I am so thankful that God brought Bob Prentice into my life. I feel certain that his faithful example is etched on my mind and heart in holy ink that time will not erase.

As pleased as I am to be able to honor Pastor Bob’s quiet faithfulness in this short tribute to an ordinary lay-pastor, it will not compare with the honor he will receive from Christ on the Last Day. 1 Peter 5:4 teaches us that faithful pastors will one day receive from Christ an unfading crown of glory. To borrow a sentiment from D. A. Carson’s book on his father, I will say that one of the first things I want to see when I get to heaven is Bob Prentice’s crown.