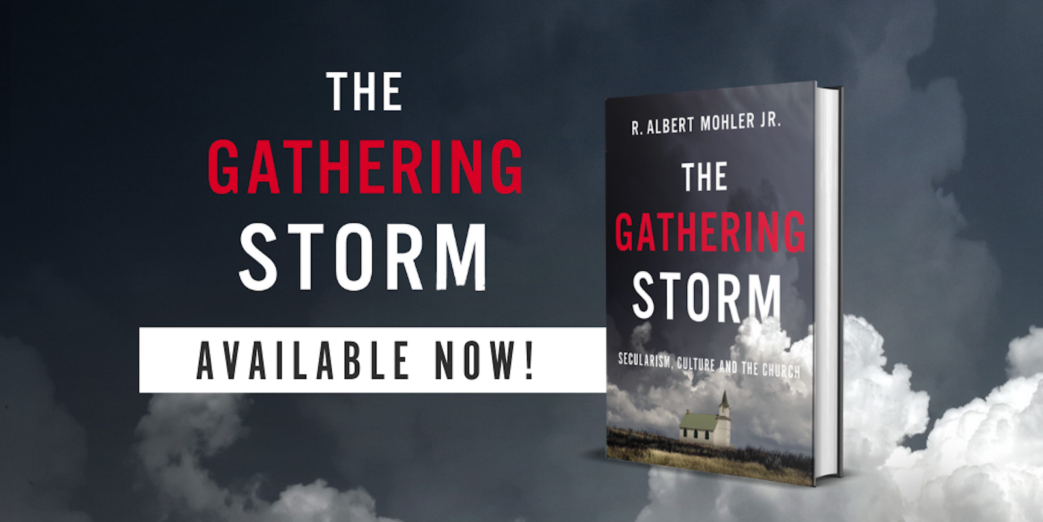 Listen to the B21 Podcast featuring Dr. Mohler discussing his timely, newest work, The Gathering Storm.

This article is an excerpt from the introduction of Dr. Mohler’s newest book, The Gathering Storm: Secularism, Culture, and the Church. For more information, click here. To order a copy of the book, click here.

Since I was in the eighth grade, Winston Churchill has been a figure of fascination and inspiration. One of the great leaders of history, he was also one of the most interesting personalities of any era. He lived his life on the stage of history, and he believed himself to be playing an important role on that stage. Indeed, the survival of freedom in the modern age cannot be told without him.

One great question has always vexed me. How could Winston Churchill’s prophetic warnings about the rise of the Nazi threat have been so right, and yet so ignored, for so long? That is one of the great perplexities of the twentieth century.

For most of the 1930s, Churchill was a political outcast in Britain. Those were his “wilderness years,” when Churchill was warning of the rise of Nazi Germany and the political class in Britain (and most of Europe) was determined not to see what Churchill saw. The horrors of the First World War were just too recent and too overpowering.

But Churchill was right, and that is why he was brought back into the government the very day that Britain declared war on Germany and finally moved to stop the march of Nazi aggression. That is why, in 1940, King George VI summoned Churchill to Buckingham Palace and asked him to serve as Prime Minister. The rest is history.

In his massive six-volume history of the war, Churchill entitled the first volume, “The Gathering Storm,” covering Europe’s long years of denial about the Nazi threat. The title captured my attention years ago. Churchill’s choice of words was perfect. He was documenting a storm that was gathering in public view for all to see – if they only would see. Summarizing his case, Churchill described the volume as the story of “how the English-speaking peoples through their unwisdom, carelessness, and good nature allowed the wicked to return.” And, of course, to rearm.

I have borrowed Winston Churchill’s title, for I see a gathering storm that already presents itself as a tremendous challenge to the faithfulness of the Christian church. Actually, this storm has been on the horizon and working its way through history for over a century now, but in our own day with a dramatic strengthening and acceleration. This is the gathering storm of the secular age.

Historical analogies are always imperfect. The storm of the secular age is not so easily identified as the rise of the Nazi threat, nor is it focused on one movement, one leader, or even one readily summarized set of ideas. But, make no mistake, it is a storm.

My main point in borrowing Churchill’s title is to borrow his main argument as well – the first task of faithfulness lies in understanding reality. Understanding the storm and seeing it for what it is turns out to be a necessary first step.

The increasingly secular character of our age presents Christians with a new and daunting set of challenges. We have witnessed the displacement of Christianity within the culture of the nations throughout western Europe and Canada, and now in the United States as well. In the U.S., we can easily point to robust church attendance in some sectors and the more general fact that a majority of Americans still claim, in some sense, a Christian identity, but those numbers are falling fast…

The most familiar word for the process we are witnessing is secularization. Scholars debate the term aggressively, but it points to a process that has been taking hold in modern societies since the dawn of the modern age.  It does not mean that all people in these societies become truly secular, or irreligious, but it does mean that Christianity, which forged the moral and spiritual worldview of western civilization, is being displaced. The society itself is progressively secularized…

A central fact of the storm now gathering strength is moral liberalism, which cannot be explained without the dechristianization of society. Moral liberalism has basically become the dominant moral commitment of the most influential sectors of American society, from the universities to the entertainment industry and the artistic centers and the mass media and the titans of Silicon Valley. Apparently, to be hyper-modern is also to be hyper-liberal in moral worldview.

Do Christians believe enough biblical truth to withstand the moral liberalism of the age? Cultural forms of Christianity have been largely dechristianized and tamed, and nominal Christianity is fast disappearing. There is no social capital to be gained by joining a congregation defined by biblical truth. To the contrary, such membership will now destroy social capital. Are evangelicals and other conservative Christians in the United States prepared to be considered enemies of the regime?

As Churchill observed as he brought that first volume of his great history of World War II to a close: “Facts are better than dreams.”

This article is an excerpt from the introduction of Dr. Mohler’s newest book, The Gathering Storm: Secularism, Culture, and the Church. For more information, click here. To order a copy of the book, click here.