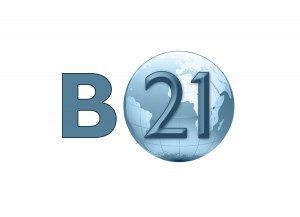 “Younger” Southern Baptists are excited about the events of the 2009 SBC in Louisville. Many are enthusiastic about the discussions that are taking place right now and the momentum of the Great Commission Resurgence (GCR) in SBC life. This was made abundantly clear by the overwhelming support (95%) of the SBC messengers for the motion to appoint a Great Commission Task Force to examine our Convention and see if we can partner together more effectively in the Great Commission. The messengers spoke with great unity and hopefulness, giving a mandate to the Task Force and our President Johnny Hunt. Part of the excitement surrounding this year’s convention was a larger presence of young Southern Baptists at the meeting. This was evident at events like the Founder’s breakfast, Nine Marks at Nine, and the b21 panel. However, this was also evident on the convention floor. This presence was clearly seen in the discussion time of the motion for a GC Task Force. A young pastor, Jarrett Stephens, followed Dr. Al Mohler and Frank Page in speaking for the motion. He spoke as a young Southern Baptist who was hopeful for the future and passionate about the Great Commission. The response to the approval of the motion was nothing short of electric.

Baptist 21 is extremely excited about this year’s convention, and in connection with part of our purpose to rally our peers to involvement in the SBC, we are interviewing several ministers who were at this year’s convention and getting their reflections on what happened. The first interview is with Jarrett Stephens who spoke for the GCR motion. Jarrett is an Associate Pastor at Prestonwood Baptist Church in Dallas. He preaches weekly at Prestonwood’s Saturday night service that is reaching lots of young people. Jarrett loves the Scriptures and teaches with a knowledge and passion to see lives changed by the Gospel of Jesus Christ. Jarrett earned degrees from Ouachita and SWBTS, and he is currently working on a Dmin at Liberty. He is married to Deb and has two daughters, Riley and Kelsey.

B21 Interview with Jarrett Stephens

1. What were the highlights of the annual meeting to you?

I would say the highlight for me at this year’s meeting was sensing and seeing the unity among all those in attendance. I have been coming to the SBC since 1997 and there is typically always something that is heavily debated or that could cause division or strife. There was just a spirit of cooperation this year that I think permeated the convention as a whole. I attribute much of the unified spirit to the GCR. I really think this sparked interest in the weeks leading up to the meeting and gave many a sense of purpose and something to rally around.

Of course visiting and catching up with buddies in ministry from across the nation is always fun. One of the best things about the convention is seeing former staff that you worked with and hearing what God is doing in their church and family life. I was glad to see a lot of young pastors this year and meet a lot of new faces.

2. Would you feel comfortable inviting more younger people to be involved in the convention? Why?

Absolutely. The SBC has so much to offer, we just need to do a much better job of communicating it. There is not another denomination or organization on the planet that has the capabilities of our convention. In 2008 through our IMB, we started 26,970 new churches. We baptized close to 565,000 new believers. We support over 5,500 missionaries that don’t have to raise their own support or worry about insurance or benefits. No other church planting entity comes close to what the SBC does or offers.

Those statistics are just on the international front. Through NAMB we started over 1,500 new churches last year. Twenty-five of those church plants were in San Diego alone. Saturating these major urban cities where 80% of North Americans live is a great strategy in fulfilling the Great Commission and one that we need to continue to build upon.

We need to communicate to young pastors and see that they understand the SBC is the 2nd largest relief organization in the world next to the Red Cross and through its six seminaries trains over 16,000 pastors, missionaries and future church leaders each year. As far as the seminaries go, just do a comparative analysis of an average costs per hour with any other major seminary and see what one comes up with.

It is all a matter of communicating the right things. I am firmly convinced that if we celebrate our victories more and simply let people see what we are doing and where their money is going young people would crave to be a part of our convention. It is clear that younger pastors want to be effective and they don’t want to waste time in doing so. There will always be issues that we disagree with or things that we can do better, but I would highly encourage the younger pastors to be involved in our convention because change within our convention will only take place from those that are in our convention. Voices criticizing from the “outside” will not change it – influencers from the “inside” will.

3. Tell us why you think the GCR is so important to young pastors and could you please speak a little about your role in speaking “for” The Task Force Motion?

The GCR is important to young pastors because of the reasons listed above. For the first time in a long time “influencers” from within the convention are asking tough questions regarding the convention. The GCR addresses the priority of the Gospel within our churches, ensures faithful stewardship of our resources and entities and gives emphasis to our churches being driven by mission rather than methods. It also affirms our past convictions regarding inerrancy and other doctrinal issues, but also speaks to the importance of sound biblical preaching. Simply put, I don’t know of a young pastor or any pastor for that matter that would not embrace what this document encourages or calls for.

In speaking to the motion from the convention floor, I simply wanted a “young southern Baptist” to be heard. I wanted to make it clear that I was not someone from the outside calling for this change. I grew up in a Southern Baptist Church and plan on investing the rest of my life in SB causes. I really do believe in the strength of our convetion, but if we are to continue strong in the days ahead tough questions and honest assessments need to be put forward. The GCR provides this. I knew that Dr. Mohler would be speaking to the motion and there is no one that could articulate the motion as well as him. My main concern was the convention hearing from someone young that loves what the convention stands for and offers, wants the best for the convention in the future yet also understands the need for the GCR.

4. What was the most interesting thing you heard at the b21 panel?

What I appreciated about the panel more than anything was how men such as Dr. Akin, Dr. Mohler and Dr. Hunt validated the meeting by their presence. I also admired how open and honest each of the panel members were in answering the questions that were submitted. I thought the panel was well balanced between local church pastors and seminary presidents and having seasoned leaders such as Dever as well as relatively new pastors like Platt allowed for a variance of opinion and was very beneficial.

I would say the most helpful advice given was the emphasis placed upon the local church and the affirmation of expository preaching. I loved what the panel had to say about both of those subjects.