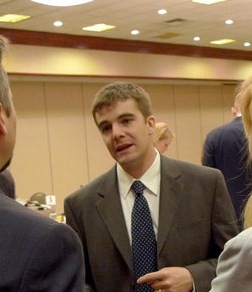 Baptist21 continues its series of post-SBC Reflection interviews with Ben Dockery. Baptist21 is thankful for Ben’s kindness in taking the time to do this interview.

Check out Part One of this Series: B21 interview Pastor Tony Merida

Bio: Ben Dockery is the Director of Alumni Relations at the Southern Baptist Theological Seminary and is the Pastor of Vine Street Baptist Church.

Why do you think more young Southern Baptists have attended the last 2 Conventions?

I have noticed the increasing number of younger Southern Baptists and there are surely multiple variables as to why, here are a few guesses (in no particular order): 1)It seems that some older leaders have listened to ideas of younger guys and allowed them to have a role in what goes on.  2) The line-up for the Pastor’s conference included many of the heroes of younger pastors and ministers  3) The GCR created heightened interest around issues that will make or break the next generations participation in the SBC  4) Smaller Events geared toward a younger generation Ex: 9Marks@9, Founders, B21 Luncheon… 5) Social media connections allow for regular ‘wide’ contact while Conferences and Conventions often provide ‘deep’ contact points, and I think the SBC Annual Meeting is becoming one of those points for our generation

Do you think it can increase even more?  What can make that a reality?

Yes, I think there are two important factors: a giving and a receiving factor. Giving: Everyone wants to know that their time makes a difference and their opinion is valued.  Young Southern Baptists want to make an impact on the business, culture, and future of the denomination.  They want to give. Receiving: There are dozens of great preaching conferences (most cost a good slice of money), but the effectiveness of the Pastor’s Conference to train, encourage, and model good preaching will likely decide if someone will set aside church budget money to attend the SBC. If the culture of the Pastor’s Conference models great preaching, I think it will continue to gain momentum among young SBC ministers.

Highlights of this year’s meeting? lowlights?

A highlight of this year’s Annual Meeting was the chance for the convention to celebrate adoption and help pay off the adoption costs for a family during the Pastor’s Conference.  The Resolution on the ‘scandal of Southern Baptist divorce’ was both a highlight and a lowlight.  I am proud to be a part of a convention that will speak to and repent of its own sins.  I am also deeply saddened by the reality that stands behind the need for such a resolution.

What do you hope the future holds for the SBC?

I hope the future of the SBC will embrace the mission statement and core values in the GCR Report in such a way that we see transformation in churches around the world.  People follow vision and I’m excited about the vision the Lord has placed on the hearts of SBC pastors and leaders.  I realize ‘making disciples of all nations’ is not new, but I am encouraged that we are adding an emphasis on a prescriptive missional vision in addition to the sound descriptive statement of faith.  It seems like the logical outworking of all the difficult work the convention has done in the last 25-30 years of grounding the convention in the Bible.  I hope we move forward with faithful doctrine and practice!

Why would you feel comfortable asking others to join in the work of the SBC?

A personal story will help me answer this. Everyone knows someone who goes to college or has an experience and when they return they think they are too cool for their home town or home church or family, well, that happened to me with the SBC. I grew up in the SBC and then several years ago after serving a para-church ministry for a few years, I found myself at the convention meeting in Nashville.  I thought I was too cool for SBC Culture: I didn’t dress, act, sing, talk, eat, or carry myself the way I saw the average SBC Convention goer.  As I sat in a red folding chair in Vanderbilt’s basketball stadium, the Lord broke me of my arrogance.  From that time, I decided to serve the Lord within the convention and the churches that are a part of the convention.  The SBC is far from perfect, but I regularly encourage others to join the work of the SBC and my reasons are never because we have the best graphics on our websites or the hippest leaders at our conferences or because we are on the edge of being relevant to the culture.  I like all those things and hope to see more of that in the SBC as the gospel grabs our hearts, but I feel comfortable asking others to join the work of the SBC because I am convinced the convention seeks after God, loves the Bible, trains faithful ministers, and mobilizes the gospel around the world.  Personally, I think people who are looking for those things and want to partner with others will want to be a part of the SBC.