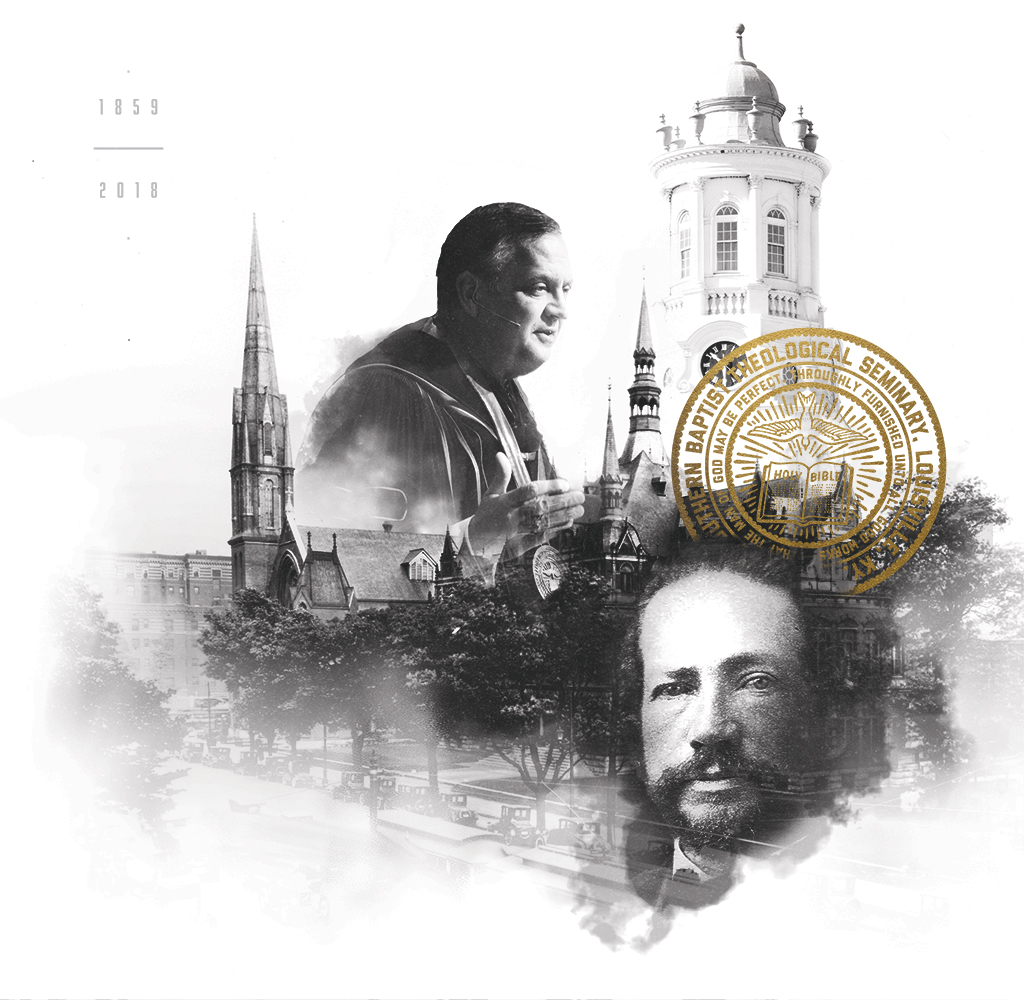 On a sweltering July day in 1856, an up-and-coming professor at Furman University stood before his faculty colleagues and delivered his inaugural address.

In his presentation, the 29-year-old James Petigru Boyce set forth a comprehensive vision for theological education in what he called “Three Changes in Theological Institutions.” Its seismic impact upon the Southern Baptist Convention, and the seminary he went on to start, could have hardly been imagined that day 162 years ago.

A robust theological education, Boyce argued, must consist of three things: (1) It must be open to all men who are duly called to and gifted for ministry without a prerequisite course of study; (2) it must produce the best-trained men in the world; and (3) it must be lashed to a clear, fulsome confession of faith.

Boyce founded The Southern Baptist Theological Seminary in 1859 in Greenville, South Carolina, upon those “three changes.” His tripartite vision continues to reverberate through the halls of Southern Seminary in 2018, thanks in large part to its recovery by the school’s ninth president, R. Albert Mohler Jr.

THE LOSS OF THE CONFESSION

Southern remained faithful to Boyce’s vision until the early 20th century, when theological liberalism — the trickle down from German higher criticism — gradually replaced the school’s confessional fidelity and held sway until Mohler’s election as president in 1993.

In his opening convocation on August 31, 1993, Mohler began the difficult work of restoring the founder’s vision with an historic address titled “Don’t Just Do Something; Stand There!,” calling for institutional faithfulness to the seminary’s confession of faith, the Abstract of Principles (the third change).

Profound controversy followed, but by the late 1990s, much of the liberal faculty had resigned and professors who held to the orthodoxy of Boyce, Broadus, Manly, Williams, and the Abstract replaced them.

While some made dire predictions that such a vision would drive students away in droves, by the dawn of the new millennium, the restoration of Boyce’s confessional vision was complete and Southern was growing exponentially. It was a remarkable reversal accomplished in a relatively short time, one that only God could bring about, Mohler said during the 10th anniversary of his election in 2003.

“This runs contrary to the wisdom of the world, which says that even to attempt such a change risks scaring many persons away,” Mohler said in 2003. “Still, God’s truth as revealed in Scripture overcomes the risk and draws many to an institution that stands faithfully upon its authority.

“You (do) scare many people away. But you look on this campus and at this faculty and the students and the trustees and the others who are gathered here, and you will see how God’s truth is like a magnet pulling persons who love God and his truth to a place.”

The ideas of making theological education accessible for any God-called minister is part of Boyce’s vision that doesn’t receive as much attention, but it is nonetheless a consistent emphasis for Mohler.

Boyce College is the most immediate expression of Boyce’s first “change.” The school originally launched in 1974 as Boyce Bible School, a non-degree granting program for pastors who didn’t necessarily have previous education. Mohler expanded the scope in 1998, relaunching the school as a four-year, undergraduate institution, and the school still accommodates students with non-traditional academic backgrounds.

In 2015, Mohler introduced the Southern Seminary Global Campus, a multi-pronged initiative to make theological education accessible around the United States and the rest of the world through online and hybrid (online with on-campus components) courses, along with conference-based courses and the seminary’s local-church based Ministry Apprenticeship Program.

These represent a global expansion of Boyce’s first change. And unlike many programs across higher education, these initiatives aren’t based only around convenience, but on Boyce’s driving conviction that all Southern Baptist pastors need access to theological education.

2 : THE HIGHEST LEVEL OF EXCELLENCE

Boyce argued that Southern Baptist ministers need access to the kind of Christian scholarship not, at the time, available in North America. He held the conviction that the deeper aspects theology and biblical studies weren’t reserved for ivory towers but should be available to preachers in churches. This led directly to deep investment in finding the kind of faculty members Boyce wanted and in 1892, to the establishment of Southern Seminary’s doctoral program, the first of its kind.

This, too, is an area Mohler has taken as central to his mandate as president. Within five years of Mohler’s election, the seminary added to its faculty celebrated evangelical scholars like Robert Stein, Daniel Block, Tom Nettles, Thomas R. Schreiner, and Bruce A. Ware.

Under Mohler, Southern Seminary’s doctoral program has achieved global recognition. A 2015 report from the Association of Theological Schools ranked the Baptist seminary fourth among peer institutions for producing “faculty doctorates” in the accreditation agency’s member schools. This means not only do Southern Baptists have access to the highest levels of scholarship, but the scholars produced from Southern Seminary now spans to schools around the country.

Today, Southern is strong with nearly 1,000 students matriculating at Boyce College, its undergraduate school, and more than 4,000 at the seminary, most of whom are pursuing a master of divinity, the clearest sign of a seminary’s health and faithfulness to its mission. Having faculty members who truly teach in accord with the Abstract as conviction and not merely as lip service has attracted students from across America and the globe. Today, Southern Seminary is the largest Association Theological Schools-accredited seminary in the world.

“He has taken seriously every point of Dr. Boyce’s vision,” he said. “Boyce College represents an expansion of the first point enunciated by the founder. A vigorous graduate program that includes several types of degrees in a variety of academic and practical areas continues to fulfill the second. His care to develop a faculty that values and teaches in accordance with the Abstract confirms the wisdom of Dr. Boyce in insisting that the school be founded on such principles.”
The three changes are each essential — but the first two hinge on the third. And it’s that one — confessional fidelity — on which Mohler staked his presidency.

Twenty-five years after beginning, Mohler has guided Southern to a place of strength and it again stands firmly on Boyce’s “three changes.” The key foundational building block for Boyce’s three changes is the third — that faculty members teach “in accordance with and not contrary to” Southern’s confession of faith: the Abstract of Principles.

At the time Mohler preached his inaugural convocation address, Southern Seminary was confessionally ambiguous: Faculty members had been signing the Abstract with fingers crossed behind their backs.

“When Dr. Mohler was elected president in 1993, most professors signed the Abstract of Principles in accordance with their private understanding of what the document actually taught — an understanding that contradicted its original intent,” said Gregory A. Wills, professor of church history at Southern Seminary and author of the definitive history of the school, Southern Baptist Theological Seminary: 1859-2009.

“One progressive professor told me that when he was hired, he asked a colleague whether he could sign the Abstract when he disagreed with it,” Wills said. “The colleague told him to do what everyone did: Sign it and forget about it.”

Nettles said the climate into which Mohler stepped was so far out of step with Boyce’s vision that the condition was critical. Confessional integrity had disappeared. Like progressive theologian Friedrich Schleiermacher, professors used the language of orthodox Protestant theology, but their words meant something entirely different.

“The governing status of the Abstract when Mohler arrived was laughable in that the school violated virtually every aspect of its confessional status with the exception of continuing to sign it,” Nettles said.

Mohler determined to change that.

Said Wills, “Mohler required professors to sign the Abstract as an indication that they agreed with it ex animo. Their signature did not reflect a private interpretation of any of its doctrines. It did not indicate a mere willingness to teach in accordance with it. It indicated that the professor agreed with its doctrines and would joyfully teach in accordance with them.
“This is precisely what Boyce intended, what [co-founders] Manly, Broadus, and Williams intended, and what Southern Baptists intended when they established the seminary. The seminary was accountable to the churches for teaching the faith without admixture of error to the pastors who would teach the faith in the churches.

“That accountability rested on the commitment of the faculty to the doctrines set forth in Scripture and agreed upon by Southern Baptist churches, which were set forth in the Abstract of Principles. To sign the Abstract with private interpretations was an admission that professors no longer believed it and would no longer teach in accordance with it. To require faculty to interpret the Abstract faithfully and affirm it wholeheartedly was a necessary and effective step toward restoring the faithful teaching of the Bible at Southern Seminary.”

THREE CHANGES AND THE FUTURE

Many liberal seminaries — both in America and across the globe — were once bastions of biblical orthodoxy. Such schools first drifted from Scripture’s teaching subtly and embraced theological liberalism quickly, and never returned to orthodoxy. Southern’s departure from orthodoxy happened in one generation. Wills points out that guarding the good deposit of Boyce’s confessional vision is crucial for Southern’s administration and faculty now and in the decades to come.

“Employing the Abstract of Principles in its intended function and interpreting it according to its intended meaning is critical to this task,” Wills said. “Error arises in the churches almost daily. Teachers of error have ever insinuated themselves upon the churches by deceiving, or by being self-deceived, or by falling into error after establishing a good reputation as faithful teachers.”

If the Lord tarries, Mohler hopes the seminary will continue to stand firm upon the foundation of biblical truth and through it, God will be pleased to raise up a vast army of — as the Basil Manly-written seminary hymn calls them, “Soldiers of Christ in Truth Arrayed,” over the next 150 years.

Southern Seminary built a new pavilion in 2009 to commemorate the seminary’s sesquicentennial anniversary. A time capsule was concealed within it where Mohler included a letter to the next president, to be opened in 2059.

“What I basically did was write in such a way that if this institution isn’t theologically where it needs to be whenever that thing is opened, they’re going to know it,” he said. “It’s going to be the most embarrassing letter ever read if indeed this institution is not preserved in that way. That is our prayer — that it will be.”

C. Jeffrey Robinson is a senior editor for The Gospel Coalition, pastor-teacher of Christ Fellowship in Louisville, and a two-time alumnus of Southern Seminary.