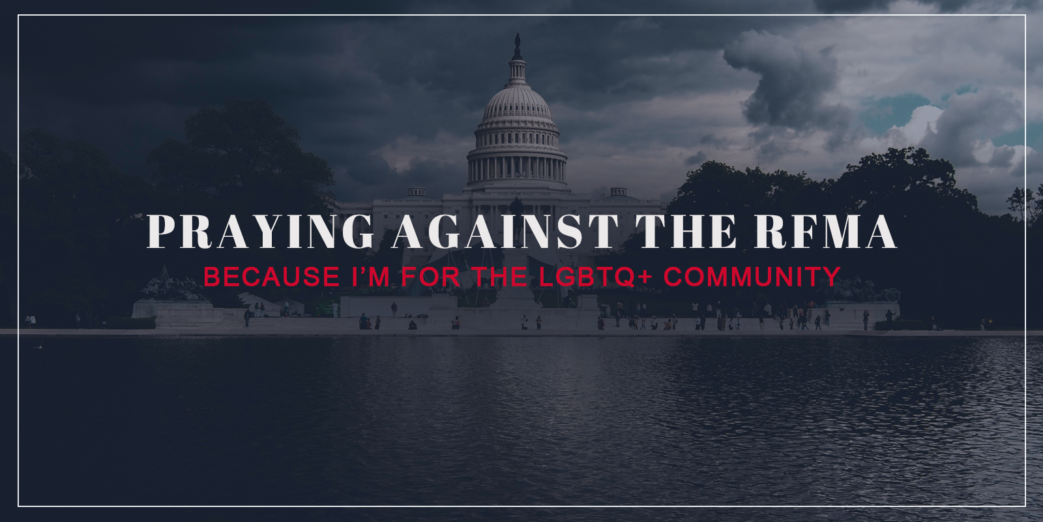 It’s not loving to create laws that promote falsehoods, confusion, discrimination, and harm, while reducing the institutions that help people flourish the most. That’s why, out of love for all people, including the LGBTQ+ community, I’m praying against the Respect for Marriage Act.

I know this isn’t a popular position in our culture or, most likely, a winning position in the Senate today. But, as a Christian pastor, I think it’s important to voice what Scripture clearly teaches to the church and the world around us, if for nothing else, to help people that think we are hateful or wrong, understand better why we believe what we believe. If you know many Christian pastors, you know that we don’t usually speak passionately about legislation related to minimum wage, the debt ceiling, and many other important things. And the reason for this lack of expressed opinion is that there isn’t as much biblical clarity on these issues. They are important, but not as clear as the issue of marriage.

So, if you will, consider briefly this unpopular opinion. To begin with, RFMA promotes falsehoods and confusion because it asserts, following the Obergefell decision, that marriage is something other than a union between a man and a woman—that it can be a “same sex marriage.” Before asking whether or not this definition of marriage has any negative consequences, it should be noted that this definition is out of step with the way marriage has been defined biblically, historically by every culture regardless of beliefs, legally, and philosophically. While “same sex marriage” seems to be a dominant notion today, it is one of the least held views in all of human history.

But, many argue, why does it matter whom people choose to love? Well, first of all, the question of “whom you can love” is different from the question, “What is marriage and who can be married?” You can love all kinds of people in a way that doesn’t redefine marriage. Also, in regards to romantic love, our culture, like other cultures, has laws telling us whom we can and can’t “love” in a romantic way. For instance, even though some in our culture are starting to push back on this idea, most still believe it is wrong for a grown man to have a romantic relationship with a young girl.

But, to put the question more accurately, why should people, whether Christians or not, be concerned about the redefinition of marriage? Because if you redefine marriage like this, then you are promoting a concept that isn’t sound in any historic or philosophical sense. And that’s not a good thing. Words matter. Ideas matter. Institutions like this matter.

Furthermore, you strip a vital social institution of its integrity, which causes greater confusion about what will really lead to human flourishing. It misdirects people away from unions grounded in the creation order that produce human flourishing and toward different unions that do not have the same grounding or track record. It’s confusing.

If it’s true that promoting “same sex marriage” promotes falsehoods and confusion, then it shouldn’t be surprising that there are other negative consequences—like increased discrimination. If RFMA passes, without a doubt, people and institutions that hold the historic position on marriage will be abused for their convictions. If you don’t believe this, you haven’t been paying attention. Over the past decade, more and more people have been defamed, sued, otherwise attacked for their traditional views on marriage. These cake makers, video makers, t-shirt makers, and many more, serve all people, including the LGBTQ+ community, but they simply don’t serve all events—like same sex weddings. This is an important distinction. They serve all people, they just don’t do all events. Yet, tragically, these folks have spent countless hours and money, just trying to live their lives.

Ah, but what about the men and women who need services? There are, of course, plenty of businesses that are happy to serve them. In fact, most businesses aren’t just happy to serve them; they declare their willingness with signs on their doors and slogans on their websites. The issue for many isn’t about creating access to the same kinds of things everyone else has access to, it’s about crushing those who disagree—those who hold to a historic view of marriage. The passing of the RFMA will only put more people and institutions under attack.

Unfortunately, all of this will lead to more harm everywhere. Why? I’ll just mention two of the ways. First, apart from the harm of creating a culture that is controlled by these falsehoods and confusion, with increasing discrimination, it will reduce the help that the most vulnerable in our society get from the people and institutions that hold to the historic view of marriage. It’s very simple. The people who do the most work with the homeless, the hungry, the poor, etc., in our country are the people that mostly hold to the historic view of marriage. If RFMA passes, these people will be under attack more and more. And when you are under attack, whether it’s through a lawsuit or whatever, you have to take the time, money, and energy you were going to use to help struggling people and redirect it to push back on the attack. And while the LGBTQ+ community is effective at many things, with all their power, they have yet to use it to create anything that comes close to what Christians have created to care for the most vulnerable of society. Without question, the RFMA will make life worse for people who need help most.

Secondly, very simply, RFMA will make life worse for children. It’s a sociological fact that children do best when they grow up in a home with a dad and a mom. RFMA will lead to more kids growing up in homes where there isn’t a dad and a mom. While this an unpopular opinion, for the sake of wanting what’s best for kids, it should be said. Think about it. Even if we didn’t use the Bible, the fact that “same sex marriages” don’t produce kids, should be evidence that these “marriages” aren’t the ideal setting for kids. I know, I know, there are many Christians who think these kinds of things shouldn’t be said because they don’t want their friends identifying as LGBTQ+ to be offended. But we have to remember that it’s never loving to lie about these things. Of course, we should treat these folks with dignity and respect. But we must be clear that part of treating them with dignity is speaking the truth in love.

I’m praying that RFMA doesn’t pass, that the LGBTQ+ will take a new, life-giving path toward the truth of their Maker and experience his blood-bought grace—and that all of us, wherever we fall on these issues, can speak the truth in love. We might not disagree less in the days ahead, but perhaps we can disagree better.