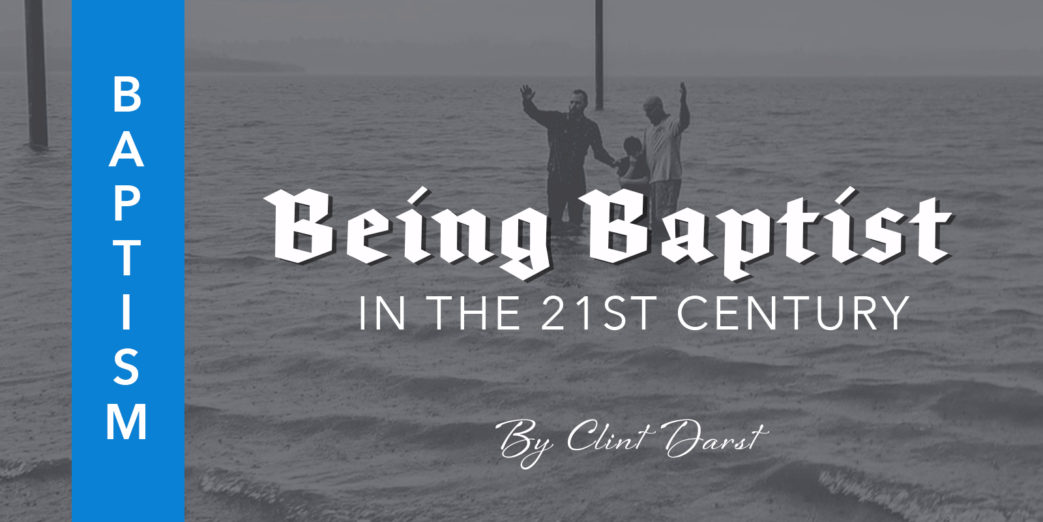 Listen to the B21 Podcast on Believer’s Baptism, featuring Pastor Clint Darst. Also, be sure to read the article below on this same topic.

“Clint, you need to decide who you believe the church is. Do you think God has designed the church to be a mixed group of believers and non-believers, or do you think he has designed the church to be made up of only believers?” My friend, a faithful PCA pastor, left me with that challenge after walking me through a study on infant baptism. I then realized, doctrinally speaking, I am a Baptist. I didn’t grow up in a Baptist church, nor was my membership at a Baptist church at the time. But I was convinced that the New Testament clearly taught regenerate church membership—the core Baptist distinctive.

Although regenerate church membership is the core Baptist distinctive, baptism is often more broadly recognized because of its role as the initiation into church membership. Mark Dever, in Believer’s Baptism: Sign of the New Covenant in Christ, explains that these Baptist distinctives complement each other because “the regenerate nature of each member of the church is protected and displayed by the practice of believer’s baptism.”

Baptists believe that a biblical baptism requires the proper candidate, meaning, and mode. In article VII, the Baptist Faith and Message 2000 states:

Christian Baptism is the immersion of a believer in water in the name of the Father, the Son, and the Holy Spirit. It is an act of obedience symbolizing the believer’s faith in a crucified, buried, and risen Saviour, the believer’s death to sin, the burial of the old life, and the resurrection to walk in newness of life in Christ Jesus. It is a testimony to his faith in the final resurrection of the dead. Being a church ordinance, it is prerequisite to the privileges of church membership and the Lord’s Supper.”

For the Baptist, the subject, meaning, and mode of baptism are grounded in the teaching and practice of the New Testament.

First, Baptists believe that the New Testament reveals that a qualified candidate for baptism must have a credible profession of faith in the Lord Jesus. Every New Testament baptism occurs after repentance and faith. We see this in the gospels generally and as an act of obedience to the Great Commission specifically (Mt. 28:19) and in Acts and the epistles. Although Jesus welcomes, prays for, and blesses children, nowhere in Scripture is there a command for or example of infant baptism. Even when household baptisms took place, Scripture describes the personal faith of those being baptized with terms like hearing the gospel, repenting, believing, receiving the Spirit, speaking in tongues, and praising God (for example, Acts 10:44-48 and 16:33-34).

Second, Baptists believe that the New Testament gives several meanings for baptism, all of which require the candidate to be a regenerate follower of Jesus. First, baptism identifies the believer as a follower of the Triune God through Christ (Mt. 28:18-20). Second, baptism symbolizes the believer’s union with the death, burial, and resurrection of Jesus. This union means that the believer is free to walk in newness of life, is no longer under the bondage of sin, and is guaranteed final victory[1] (Ro. 6:3-10). Third, baptism pictures the believer’s cleansing from sin and the accompanying clear conscience (Acts 22:16). Fourth, the meaning of baptism includes the reception of the Holy Spirit (Acts 2:38). And lastly, since baptism is the initiatory act of church membership, it means the believer now belongs to Christ’s body, the church (Acts 2:41,47). As John Hammett wrote in 40 Questions About Baptism and the Lord’s Supper, “The meaning of baptism cannot be limited to the individual’s relationship with Christ, for Christ is inseparably connected to his body, the church.” These five meanings are only possible if the individual being baptized is a believer.

Third, Baptists believe that the mode of immersion is clearly taught in Scripture, was the preferred practice of the early church, and ought to be the regular practice today.[2] Baptists often point out that the meaning of the Greek word baptizo means to immerse, dip, or submerge something in water. In both the baptism of Jesus in Matthew 3:16 and the Ethiopian eunuch in Acts 8:39-39, the details given make it obvious that immersion was practiced. And lastly, immersion most clearly symbolizes the theological meaning of baptism—“union with Christ, the washing away of sin, regeneration, sanctification, and the resurrection from the dead”[3] (Ro. 6:3-4).            As Baptists, we believe only those who give a credible profession of personal faith in Christ are candidates for baptism. This most faithfully upholds the meaning of baptism, is most clearly expressed via immersion, and, when rightly applied, guards our most core baptist distinctive, regenerate church membership. My good friend and PCA pastor served me well by getting me to ask and answer the right questions. I praise God for him, and I look forward to glory where faithful brothers and sisters no longer disagree

[1] The First London Confession (1646) states: “…as certainly as the body is buried under water, and risen again, so certainly shall the bodies of the saints be raised by the power of Christ, in the day of the resurrection, to reign with Christ.”

[2] I used the word regular because the Didache did make provisions for other modes in Chapter 7 verses 1-4.