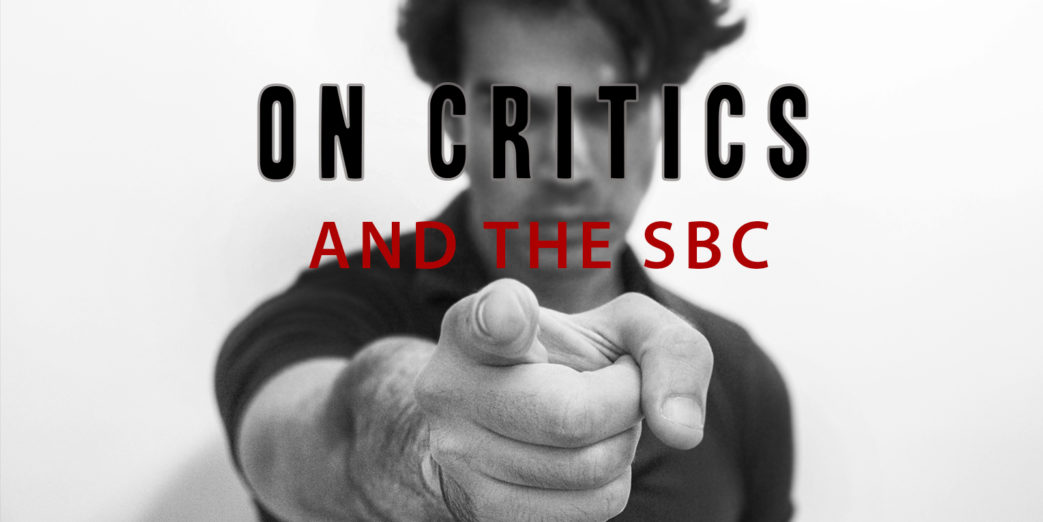 The advent of social media has changed our lives in innumerable ways. For Southern Baptists, the rise of platforms like Facebook and Twitter has fundamentally changed how we relate to one another, and to a large extent, meaningfully altered our experience as members of America’s largest Protestant denomination. The ability to communicate instantly online has widened our natural circles of interaction and brought us into regular conversation with many people we would otherwise see only rarely, if at all.

But social media has done more than bring us together. It has also upended the way we receive information. Indeed, social networks of all kinds have democratized the distribution of news. The benefit of this is clear; information is not only more plentiful, but it is available faster. The drawbacks, of course, are also clear; false information abounds. And for too long, Southern Baptists have allowed certain individuals and organizations to utilize blogs and social media to falsely malign faithful men and women up and down the ranks of our denomination.

These critics take different forms. Some are provocateurs, others “trolls,” and in a class of their own, are those known as “discernment bloggers.” And taken as a whole, it is more than apparent that their pernicious behavior is worthy of rebuke. But even so, addressing them and the problems they create is fraught with difficulty for multiple reasons.

First, these people are not a single group. Depending upon whom you ask, you’ll receive different answers about exactly who falls into the broader category described here. Secondly, it isn’t always clear whether a given expression of concern or critique is offered in good faith or actually merits concern. Few among us wish to ignore true instances of error or misconduct. And finally, one would only address this group with reluctance because there is typically great wisdom in ignoring the clamoring of fools (Prov. 26:4). And certainly, much of this behavior warrants such a designation.

A response is warranted, though, because in recent years their numbers have multiplied. Not only this, but in many cases meeting their lies with silence has only filled the void with false information. So it seems that a further word is appropriate about how to answer the fool lest he be “wise in his own eyes” (Prov. 26:5). To this end, the goal isn’t really to identify each bad faith actor or combat every false accusation. Instead, it is enough to endeavor to recognize such behavior and seek to diminish its influence among us.

For years, we’ve witnessed these digital mobs cycle through various targets across the SBC. They’ve attacked our national entities, denominational leaders, seminary professors, local church pastors, even lay men and women. Indeed, compiling a list of the people and institutions that have drawn the ire and ridicule of these groups would take more time than you’ll devote to reading this.

In terms of tactics, their methods are multifaceted. But a few of their favorites include misrepresenting someone’s actual words, falsely portraying real situations, and, when all else fails, crafting outright fabrications. With regularity they seek to question or impugn the character and actions of any person or institution on the wrong side of whatever boundary markers they’ve erected–whether political, theological, or otherwise.

But make no mistake, these are not benign attacks. Having spent time with those who’ve been repeatedly targeted by this invective, it is clear that even the attacks of those with the lowest of character come at a high price. Of course they do. The individuals being attacked, being subjected to scorn, ridicule, and slander, often by a nameless, faceless attacker–whether an avatar or label such as “news division”–are human beings with real emotions and real relationships.

Imagine having to explain, repeatedly, to one’s family or friends or children that in fact you had not become an apostate or committed some grievous sin. Imagine the toll of having one’s character or theological orthodoxy called into question at the whim of some unknown detractor and being expected to publicly answer any inquiry at their pleasure. Imagine having to defend oneself from fabricated allegations knowing that some will interpret even your defense as an admission of guilt. This is the entire point. The goal of these attacks is to sow distrust and reap division in hopes of undermining, many times, those who are most effective in their service to the kingdom of God.

Brothers and sisters, we should call this what it is: wickedness. It is the work of Satan, who is the accuser of the brethren (Rev. 12:10). Imitating his behavior is a far cry from the call of discipleship. In fact, it is disgraceful. The people of God should no longer countenance such. Indeed, the Bible commands it: “As for a person who stirs up division, after warning him once and then twice, have nothing more to do with him” (Titus 3:10).  The Apostle did not mince words, Christians should have nothing to do with those who willfully attack the brethren. Churches should discipline members of their congregations engaged in this behavior.

And to those who are on the periphery of these conversations, I would make an additional appeal: Please do not allow bad faith actors to use you as a shield for their malevolence. Do not provide cover for those who falsely accuse the brethren. Refuse to engage or lend your credibility to those who intentionally target our brothers and sisters.

Ahead of Christ’s return even the most faithful among us remain fallible. No position of authority or past record of service makes anyone immune to criticism or correction. But taking potshots from the safety of one’s office or living room while shielded by a computer screen is hardly beneficial to our cooperative efforts for the sake of world missions. Nor does it display the gentle spirit of reproof that Jesus commends to us, the aim of which is to win back or “gain” the one in error (Mt. 18:15).

Not long ago, Jason Allen, the president of Midwestern Baptist Theological Seminary, faced false attacks launched by one of these groups. He wrote about that experience and offered helpful insight for Southern Baptists to consider. Among his most helpful points, he made clear that while no one is above accountability, accountability and accusations are not the same thing. More than that, he encouraged what is most needed: sincere dialogue.

When brothers and sisters in Christ have legitimate concerns, they should take the opportunity to make direct (and usually private) inquiries. In most cases, legitimate concerns can be satisfied with legitimate responses apart from unfounded attacks or public spectacles.

As Southern Baptists, we’re united by our faith in the Lord Jesus. Further, we’re able to come together for the vital task of world missions by our mutual commitment to the BFM2000. As has been said many times, our statement of faith is a solid document. It not only testifies to the essentials of the faith that was once for all delivered unto the saints (Jude 1:3), but it further outlines matters deemed critical for cooperation. We would do well to impose no further tests of orthodoxy, or ideological purity, upon those who lead and serve our convention.

Allowing these digital broadsides to continue unchallenged threatens the integrity of the entire convention. The SBC has long been composed of various wings. At times, the division between them has been contentious, occasionally to the point of uncharitable infighting. But at our best, we’ve recognized that our differences make us stronger by fostering both energy and accountability.

There are matters in our convention of deep concern. In a denomination of nearly 50 thousand churches there always will be. But charity, respect, and kindness are not to be sacrificed in the name of those concerns. Subgroups within the SBC need not seek advantage by turning a blind eye to unjust attacks aimed at those outside of their tribe. We need not agree at every point in order to deal effectively with the problem before us or to speak up in defense of fellow Southern Baptists.

Owning one’s rivals might be cathartic, but it certainly isn’t righteous. We can effectively silence these criticisms by refusing to countenance such attacks regardless of their targets. After all, we are not enemies or opponents but brothers and sisters. In condemning this behavior, we can show the world a better vision of the family of God. Let our words and actions be marked by love (John 13:35).