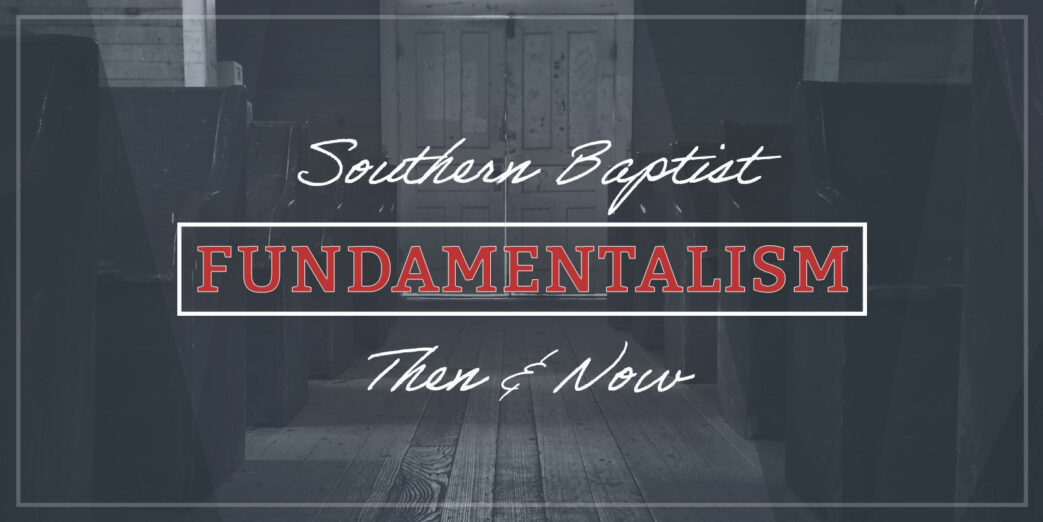 For fifteen years, I’ve been a church historian who has taught courses on topics such as Baptist History, Fundamentalism and Evangelicalism, and American Religious History. For my PhD at Southeastern Baptist Theological Seminary, I wrote a dissertation titled “The Development of Baptist Fundamentalism in the South, 1940-1980.” Though I never published the dissertation, I have written several journal articles and book chapters that were related to the larger project. Based largely on that research, I want to offer some thoughts on Southern Baptist history, as well as some current tensions within the Convention.

Two key factors made the denominational fundamentalists stand out from most Southern Baptist conservatives. First, SBC fundamentalism was a populist movement that deeply distrusted institutions and leaders, nearly all of whom they perceived to be unfaithful compromisers at best or disconnected elites at worst. Because of this dynamic, earlier historians who wrote on this topic used the phrases “anti-conventionism” and “fundamentalism” as synonyms. Southern Baptist fundamentalists perceived themselves as righteous outsiders within the Convention who were called to hold the suspect insiders accountable.

Another defining feature of SBC fundamentalists was the influence of far-right views of American culture. I don’t mean the postwar conservative intellectual tradition or the conservative wings of the Republican or Democratic parties of that era, though fundamentalists were political conservatives. Rather, by far-right views of culture I’m talking about fears of communist infiltration of the US government, the defense of Jim Crow style racism in the South, and anti-Catholic bigotry. Often, these three themes were intertwined in elaborate right-wing conspiracy theories. Think the John Birch Society rather than William F. Buckley or Barry Goldwater.

Throughout the Conservative Resurgence, moderates frequently claimed that all conservatives were fundamentalists. That was far too simplistic. Certainly, conservatives were all committed to historic orthodoxy, rallying around the doctrine of biblical inerrancy. But many conservatives had never been fundamentalists and none of them were anti-conventionists of the sort that were common a generation earlier. Southern Baptist conservatives wanted doctrinal renewal for the sake of greater effectiveness in evangelism and missions.

I believe this information provides some helpful historical context for understanding the current tensions within the Convention. Some Southern Baptists are concerned about alleged progressive drift in the contemporary SBC. However, many of them seem more like the denominational fundamentalists of the 1950s or 1960s than the resurgent conservatives of the 1980s. The prevalence of institutional mistrust, populist concerns about leaders, the attraction to conspiracy theories, and the influence of far-right views of culture echo mid-20th century Southern Baptist fundamentalism. More important, they reflect trends in the wider culture that have grown increasingly pronounced over the past decade or so.

To be sure, there are real progressive threats to Christian faithfulness in American culture. But the answer to these challenges is not a new Conservative Resurgence in the SBC. At the risk of stating the obvious, we are already thoroughly conservative. This is not 1979. The progressive threats are “out there” rather than within the Convention. We must not capitulate to a reinvigorated fundamentalism that would divide us over personalities, preferences, and politics. That is the spirit of J. Frank Norris, not Adrian Rogers.

I believe the way forward for Southern Baptists is a Great Commandment Resurgence. We need to trust each other, recognize who are real enemies are (the world, the flesh, and the devil), and develop calloused knees and hot hearts for the lost. My prayer is that we would renew our commitment to our conservative confessional consensus and our historic principle of cooperative missions: the “eliciting, combining, and directing” of our energies toward Great Commission faithfulness for the glory of God and the sake of the nations.

Dr. Finn serves as the Provost / Dean of the University Faculty at North Greenville University in Tigerville and Greer, SC. Previously, he served as Dean of the School of Theology and Missions and Professor of Theological Studies at Union University and Associate Professor of Historical Theology at Southeastern Baptist Theological Seminary. He continues to teach in the Ph.D. program at Southeastern, where he supervises doctoral students in Historical Theology. Dr. Finn has been married to his wonderful wife, Leah, since 2001. Together, they have 4 children. In his spare time, Dr. Finn loves to root for the Georgia Bulldogs and Atlanta Braves. Connect with him at www.nathanfinn.com.