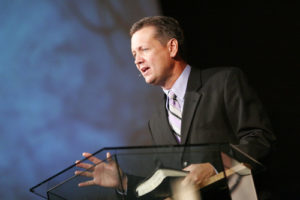 Kevin Ezell has been my family’s pastor for 14 years. I could tell you countless ways that he has ministered to us, from hospital visits, to wearing the Whitefield Wildcat Mascot to cheer up my little girl! His election as the President of NAMB could be an occasion for much sadness, but instead it gives me great excitement because I know what kind of man and leader NAMB is getting. I believe Kevin Ezell will lead NAMB into her greatest days, especially in the area of church planting.

The SBC spoke with a clear voice when voting for the GCR that they want NAMB to become a church planting machine that focuses at least half its efforts in this area. At present about 17% of NAMB’s budget is focused towards church planting. Because Kevin has led his church to value congregational multiplication and planting, he is the right man to lead NAMB towards this focus.

Highview has participated in many church plants in strategic places all over America from NYC to Las Vegas. Some of the cities include: Vegas, Boise, Philly, NYC, Atlanta, Indianapolis, and more. The SBC wants NAMB to focus on assaulting lostness through church planting in the major cities of the US. Kevin Ezell and Highview Baptist Church have been doing that!

Part of Kevin’s job will be pastoring, mentoring, and encouraging planters. If you want to know if he’s ready for that then ask some of our brightest planters like Aaron Coe in NYC or Aaron Harvie in Philly. Aaron Coe said recently to Ed Stetzer, “…I don’t say this lightly, if it were not for Kevin and the people of Highview, there would be no Gallery Church in NYC…They have supported and encouraged me and my team every step of the way.”

2. He is a trainer of young pastors.

God has graciously allowed me to spend the last 5 years on the pastoral team at Highview under the direct mentoring of Kevin Ezell. I have met with him once a week every week to talk through sermons. When I encountered counseling situations that were shocking to me, Kevin was the one I’d call. When I was trying to figure out how to minister to a husband who just lost his wife and child, I sought Kevin’s counsel.

Kevin Ezell has spent years investing in me and hundreds like me. During his time at Highview he has invested in, mentored, trained and sent out hundreds of pastors, youth pastors, missionaries, etc. to locations all over America and the globe. This strength and relational ability will allow him to pastor, encourage, keep accountable, and inspire thousands of planters around the US.