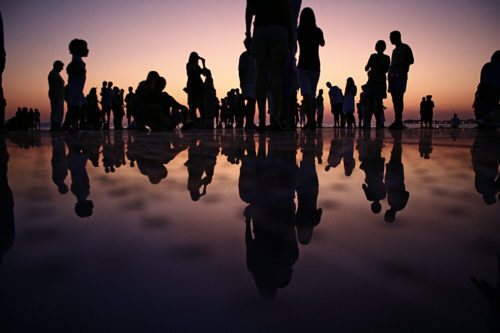 Today we feature an article by Peyton Hill, the Lead Pastor at Highland Baptist Church in Grove City, OH and frequent contributor to B21.

I confess. When I read a book I often like to read the last few paragraphs of the final chapter before I even start to work through the preface. I want to see how it turns out in the end. In fact, I chose to watch all eight Harry Potter movies before reading the first book. Now, as I prepare to begin the last book, I anxiously await reading about the defeat of Lord Voldemort…because I know it is coming…I’ve seen the movie.

When we preach the gospel we declare the good news of Jesus’s victory. We know what awaits death and the cosmic powers of the present darkness. Jesus wins. Satan received a crushed skull while Jesus hung on a Roman cross. The final consummation does not bode well for the snake. We already know the ending because we have a book for that (Though, let’s be honest. The odds are you’ve never preached through that book because it scares you. And also you don’t want to be that guy that draws a crowd by using his prophesy charts and Left Behind illustrations.)

The end of the missionary task

When we talk about the gospel we talk about a kingdom and the King. The King will ultimately return in order to establish his kingdom fully and reign personally through his presence. But the picture we get of the end tells us something about the current missionary task. In Revelation we see a picture of the people of God from every nation, tribe, people, and language (Rev 5:9; 7:9). Amazingly we see former Americans and non-Americans. We see white people and people of all types of skin pigmentation. We hear English and Spanish and a host of languages that no one speaks anymore. We see former businessmen worshiping alongside former tribal chiefs. We witness those who were martyred at a young age for following Jesus alongside the little, old lady who faithfully taught Sunday School until she passed in her early 90’s.

Here is the point—the picture of the end includes all types of people from all types of backgrounds who have one thing in common. Each individual passionately loves and follows a formerly dead Middle-eastern man who has holes in his hands, feet, and side.

A motivation for the missionary task

Jonah tells us, “Salvation belongs to the LORD!” (Jonah 2:9). Yet Jesus commands his disciples (aka followers) to make more disciples (Matt 28:19). Jesus does not tell his followers just to stay in their cities either, but rather they are to go to the nations (which means people groups). Theologians and pastors can argue all day whether or not the disciple-making commands of Jesus at the end of the Gospels and beginning of Acts mandate all followers of Jesus to go overseas, but God provides multiple motivations for the missionary task. Not only do we go and make disciples because we think we must as Christians, but we go and make disciples because we know the end already.

Remember the picture of people around the throne of the crucified but risen Lamb? It might look like an awkward family reunion with the weird uncle and smelly second cousin (once removed). But really it is an actual scene of a future gathering of blood-bought, redeemed sinners who have one confidence—finding their life hidden with Christ in God (Col 3:3).

Now, why would followers of Jesus not want to do the work of spreading and watering seeds of the gospel among all peoples? Why would churches not want to give their money, time, and sense of comfort to get the gospel to the ends of the earth? We know the end already. It is fixed. We know God sovereignly saves. We know we have our commission. So why do we shrink away from crossing the pain-line in evangelism (The concept of pain-line comes from Rico Tice’s book, Honest Evangelism)? Why do we fear giving away money for the cause of international missions and church planting? Why do we avoid going overseas for short-term trips? Why do we neglect to call our church members to leave us for the sake of the gospel among underserved people?

In the end, we neglect the disciple-making mandate because of a host of reasons. But for starters, we forget we know the end already. The Harry Potter books are so much better than the movies. Every book brings a surprise because the movie always leaves out something the book seems to think is important. But as I begin the final book, the one that everyone tells me will make me emotional (not that I would ever cry over a fictional book…or at least admit to it), I know I can read every page with confidence because I already know the major storyline’s conclusion. I do not know little details. I am glad because it would completely ruin the book to know everything that happens already. But I am happy to know the major concluding scene because it gives me confidence and motivation to carry on and finish the series (it works out pretty well in the end).

Christians know the gathering that takes place in the future. We have confidence in the gospel because the best news imaginable is the power of God for the salvation for Jews, Greeks, Muslims, Hindus, atheists, the neighbor next door, and the guy who straps bombs to his chest and goes into public areas. The gospel brings salvation, and those who commit to the King will live together in his kingdom forever. We do not know the little details of how we will get to the point where we worship with people of every nation, tribe, people, and language. But we know the conclusion—gospel people of all backgrounds making much of our King who came for us. Why would we not want to get busy working to that end?