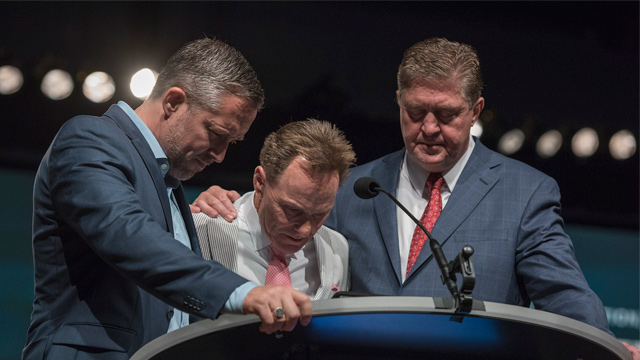 Can you believe it? It is that time of year again when thousands of Southern Baptists will make their way to the Annual Meeting of the Southern Baptist Convention. This year the destination is Phoenix, and as always, this gathering of Southern Baptists is sure to make for some exciting memories. Will there be a “mic drop” moment during the Resolutions Committee report like the one offered by Dr. James Merritt last year in St. Louis? Will Dr. Moore have to remind us again what it means to be Baptists? Will we have a Wiley Drake sighting? These questions (and more) loom large.

But more than anything, Southern Baptists who make their way to Phoenix in just a few days will want to know the answer to one crucial question: “Are we really united?”

After a close runoff election, a clear winner could not be determined between Gaines and Greear, so a third election was announced. The tension in the room before that historic vote could be felt like a humid blanket of heat (which I’m told should not be an issue in the “dry heat” of Arizona). Young and seasoned Southern Baptists made their way into the room to cast their ballot for the third time in a matter of hours for their presidential preference. But then something unusual happened, something that still seems to be talked about over cups of coffee and text message exchanges across the SBC: J. D. Greear pulled out of the race, and he placed his full support into the presidency of Steve Gaines. The room of messengers burst into applause over the humility of Greear and Gaines, and, then, President Ronnie Floyd led those in the Convention Hall in prayer.

The crazy scene and turn of events at last year’s Annual Meeting took days, if not weeks, for most Southern Baptists to process. But the cry of Southern Baptists, both young and seasoned, as they left St. Louis was “unity!”

Before making your way to Phoenix for the Annual Meeting, or before live tweeting during the various historic moments surely to come, I encourage you to join me in praying through the following five prayers for unity: